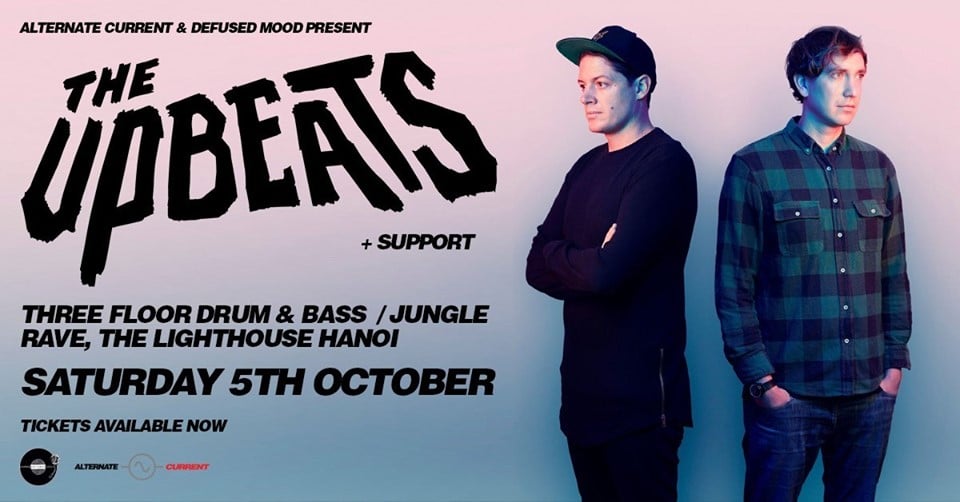 Defused Mood & Alternate Current Asia & Jigsore Sound are excited to join forces once again and reveal one of the biggest Drum & Bass acts to come to Vietnam!

The Upbeats’ unique and organic take on 170bpm+ bass music has seen them make their home in the highest echelons of dance music worldwide. Known for their organic and natural sounding drums, The Upbeats are a pillar in the DNB community. The duo have collaborated with stalwarts such as Noisia, Shapeshifter, Foreign Beggars, and Mefjus to name a few. In September 2014, their collaborative EP with Shapeshifter, ‘Bloodstream’, reached no.1 in the NZ iTunes Charts 2 days after being released.

They have released on major dnb labels including RAM Records, Virus, Blackout and Vision Recordings along with remixing heavy weights such as Ed Rush & Optical, Black Sun Empire & Noisia.

Saturday October 5th we will be taking over the The Light House for a 3 floor Drum & Bass and Jungle rave. Expect Hanoi’s best soundsystem, 3 deck DnB & Jungle madness and our biggest headliner yet!

Tickets are on sale now!

Send us a message to Defused Mood to get your tickets ordered!