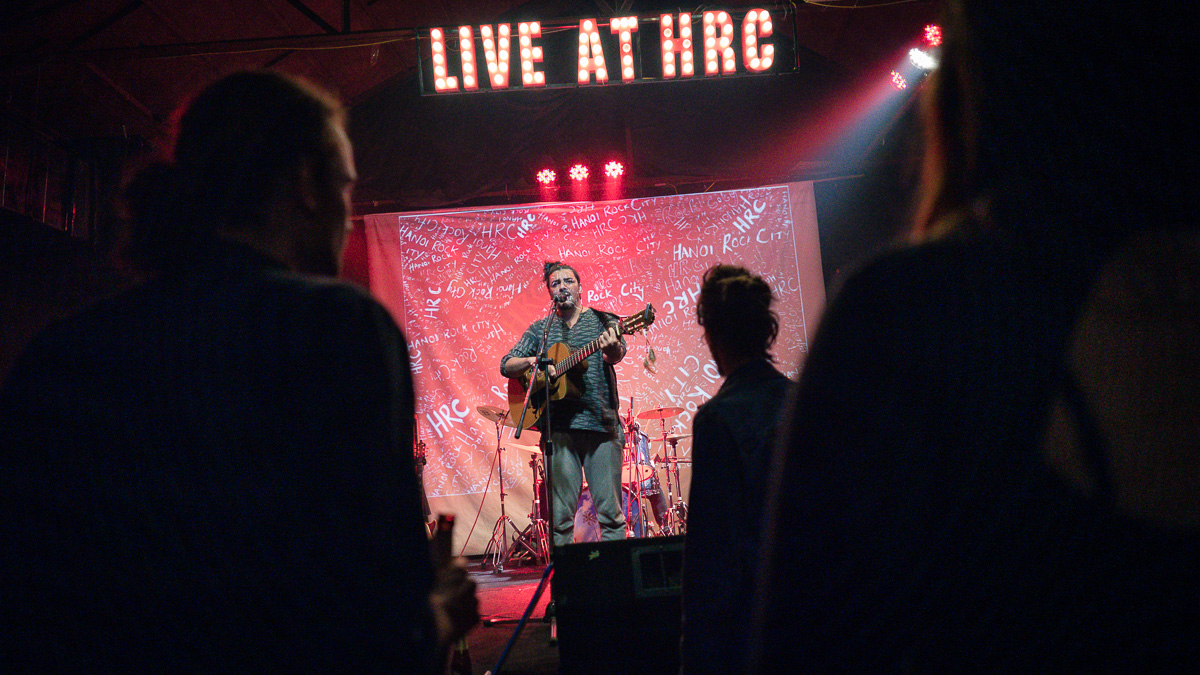 It’s Wednesday night, the floor is swimming in beer and a Canadian drummer with a predilection for writing musicals, thrashes the drums while a Vietnamese teenager belts out death metal on guitar at alarming speed and a confused Italian bass player struggles to keep up with the pace of it all. One song later and a blind dude gets up to guitar riff and sing some outlandish blues numbers. After that, what is surely Hanoi’s sexiest folk singer steps up to sing a Michael Jackson cover; she is small and birdlike, like a sparrow, and hits every note perfectly. She dedicates the song to her ex-boyfriend but afterwards jokes: “Not really. He means nothing.”

The evening’s eclectic nature is not unusal here, at just one of the many open-mics held weekly at the, now infamous, Hanoi Rock City. Nights at this large live-house are high energy, a little cliquey perhaps, but they zip along creating great moments for musicians to come together and jam. Many a Hanoi band had been born here.

The Opera House aside, Hanoi Rock City is about as close as the capital gets as to having an iconic music venue. It has been open almost 10 years and though it was founded by four people, work commitments mean one of them is now in London and two in Saigon, so the club is run exclusively by Duc Anh, who tells Chào: “Just call me D.A. Everybody does.” So we will.

“I worked for a bank for six months and quit. I thought, ‘I can’t friggin do this. It is pointless.’ For the first three years I was living off poker and pool.”

Long flowing scarf, oversize beanie hat and an old beaten up black trenchcoat, D.A looks every inch like the sort of guy that runs a rock club, and he talks every inch like the manager of a rock club too, so it comes as a touch of a surprise when he tells us his day job is as a math teacher, though if that is not sufficiently roguish he quickly puts our mind at ease, telling that in the past he used his math skills to good effect to hustle people at poker games. He even thought briefly about playing professional.

Charismatic, almost cocky even, this Hanoi rock legend’s love of music is infectious, and he gets excited and his eyes start to dance when discussing Hanoi Rock City. The venue often does not make money, and if needs be D.A. subsidizes it with income from his day job. It is clear he would rather die than let the club, which has been so much of his life for the last decade, close.

“I think nobody is as stupid as I am. I put a lot of money in this in the first place, and worked my ass off for free for nine years, I don’t think anyone would do that. To be fair, I have a fulltime job, teaching math and it’s ok to make my living, and I’ll be like ‘yeah two or three nights per week, why not?’” he says. “Without the job. I would be fucked, yeah. I came back from the UK with a master’s degree in financial math. I stayed there for eight years. I worked for a bank for six months and quit. I thought, ‘I can’t friggin do this. It is pointless.’ For the first three years I was living off poker and pool.”

Though it is clear that the club would not have survived without his energy, input and, at times, financing, he refuses to put all the success and longevity on his own shoulders and is quick to put attention back on the bands whenever her can.

“Luckily all the artists in Vietnam are very down to earth and easy to work with, sometimes they play for free, they don’t mind at all,” he says. “I sometimes just have to go up to some artist and say, ‘Dude, I need the rent and I’m putting this gig on, can you guys play for free?’ And they are like ‘Oh yeah sure, I’ll play for beer.’ Even the biggest bands do this, as they consider this place their home. It’s where they got started.”

“Ten minutes into the gig she hit her hand on the snare and she started bleeding, so she played for 20 minutes like that and my snare was covered in blood. It was crazy.”

HRC, as the regulars call it, plays the full gamut: from local Vietnamese rock bands through to regular expat bands such as Sirens of Ha Long and Shadylanes, right up to international acts with global fame such as American metalcore band As I Lay Dying. However, Hanoi Rock City is a slightly misleading name as it is much broader than just rock music. D.A. was inspired when he frequented a venue called Nottingham Rock City when he was a student in England, but the venue also hosts stand-up comedy and DJ nights alongside the rock. It has even hosted several groundbreaking art exhibitions.

“We have done quite a lot of weird shit over the years,” D.A. says. “Life drawings, exhibitions, sculptures. I remember this Singaporean band playing experimental music called The Observatory, and the drummer was this girl who was really hardcore. Ten minutes into the gig she hit her hand on the snare and she started bleeding, so she played for 20 minutes like that and my snare was covered in blood. It was crazy.”

D. A. basically started HRC because he and his friends thought there was a bit of a gap in the market. Lots of expat and upcoming Vietnamese bands wanted to play but their only options were small coffee houses or places in huge stadiums or at Hanoi Opera House where the vast majority of musicians would never get the chance to play. Hanoi needed a 300-person live music venue, and Hanoi Rock City was born from those desires.

“We are probably the only place left in the country that has a mosh pit,” D.A. says, his eyes lighting up at the thought of moshing. “Trust me, like 99.9% of musicians in Vietnam have played here, because you all have to start somewhere.”

If you are in to music and you are visiting the capital, you would be mad not to check out Hanoi Rock City. Raw, loud and playing anything from death metal to funky trip hop inspired by textured gloomcore (ok, Chào just made the last bit up), under D.A’s passionate stewardship HRC is, and will continue to be, one of the leading creative art hubs not just Hanoi, but the whole of Vietnam.