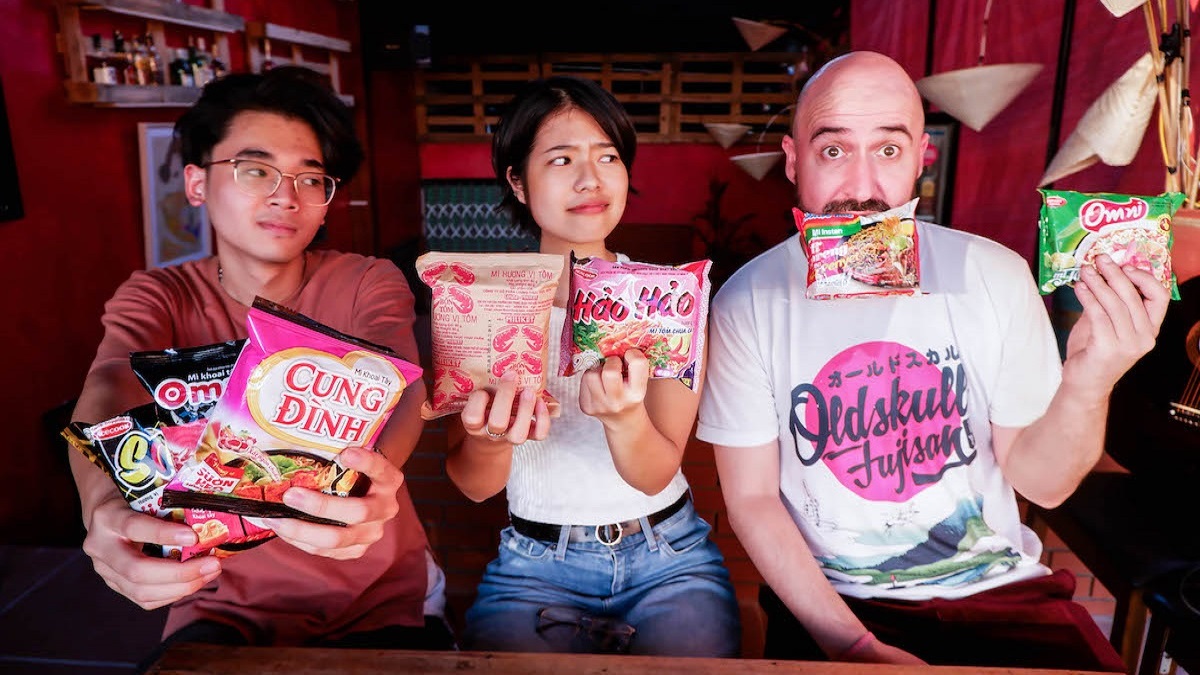 Beloved of lunching high-schoolers, lazy bachelors, construction workers, time-short students, or as a drunken late-night hangover reducer, there are few in Vietnam that haven’t been seduced by the dirty charms of a bowl (or cup) of instant noodles. Indeed, the average Vietnamese citizen eats more servings of these than anybody else in the world. Crack an egg or a rogue chopped chili into one of these bad boys, and you have a meal fit for a ghetto-king. But where to start? Vietnam seemingly has dozens of brands, and hundreds of flavors, but which is best?

The Chào team slurped up a few bowls of the country’s most popular noodles in an attempt to separate the wheat from the chaff.

Roughly translating to Dynasty (oh the glamor), these noodles were one of the few noodles made from potato so have a starchy, mealy feel that might not be to some tastes, and certainly not befitting your average Vietnamese emperor. The packaging tells us they were flavored with pork ribs and bamboo, and they did indeed have a nice meatiness to them. Thickish noodles, and a nicely balanced flavor. A middling pick. 5/10.

As one of the oldest noodles brands in the country, it is Miliket’s iconic hipster shrimp design that coined the Vietnamese term for the instant baddie – mỳ tôm – which directly translate to shrimp noodles, and we were excited to try this retro classic. We’re sad to report a hard fail, in fact, the worst of the bunch by a country mile. The shrimp on the packaging was a clear red herring, and they only came with one sachet of extras, which seemed to be a slightly bland salt. The texture was bad and they seemed to be falling apart. The noodles might work added to a hot pot, maybe.

Spawned into the world fresh after the end of the war, its humble plain nature was due to limited resources post war, thus plain and simple was the way to go when it came to mass production. Its classic image is mostly kept alive by nostalgia. However, let bygones be bygones. By today’s standard, Miliket is dreary, salty, stodge, and an embarrassment to the genre. Avoid. 2/10.

The name of these is a riff on super spicy, and they were spicy as hell, the sachet of sauce turning the water into a thick, rich broth, but other than the ass-tickling heat, there wasn’t much going on in terms of flavor. A poor man’s recreation of the iconic Korean’s searing Samyang noodles. For higher intensity, we suggest turning it into a mixed noodles dish instead of merely adding boiling water for broth.  6/10, rising to 7 if you want lots of heat, as many of you do.

Ask anyone and these are probably the most popular in Vietnam, but would they live up to hype? We will get slammed for this but they were ok—nothing more–certainly not as great as we were led to believe. Billed as “sour and spicy,” they were neither particularly sour or spicy, though the actual noodles themselves were one of the best in terms of texture, with an ever-so-slight firmness. Their fragrant aroma meant they smelt the best too. Decent, but not deserving to dominate Vietnamese kitchen in the way they do. 6.5/10.

Loved by school kids across the nation, these were superb. Piquant mouth-watering flavor infused with zingy lime/lemon. These were one of the standouts and hard to beat. The best of southeast Asia in a box. Omni are the first choice choice among middle schoolers and highschoolers in between breaks.

“One time, the queue to buy Omni was so long by the time it was my turn, break was over,” said Be, a 23-year-old Hanoian as she reminisced about her school days. “Me and my friend were determined, so we sneaked it into class and ate in the back! Somehow, the teacher couldn’t see, or even smell it…probably because there were 50 other students!”

We cheated slightly by adding strips off beef jerky—my tom chanh–just like the local kids, which gave them a hearty boost but they would have worked well stand alone. A near unanimous pick as Vietnam’s best noodle brand. Prove us wrong! 8/10.

These are nationally advertised as healthier than other instant noodles but, hey, they are still instant noodles at the end of the day. Like Cung Dinh, these were also made of potato, so it will lot depend if you like these type of noodles. Not an outstanding flavor, but solid enough. The beef taste was not coming through the way we would have liked. 6.5/10.

Ok, so Vietnam has a good selection of instant noodles, but throughout Asia there are many other cracking brands, and we couldn’t resist throwing a foreign interloper into the mix. And this popular Indonesian brand easily made the grade. They had a surprising chewiness to them and the sauce gave a rich umami flavor, though was a bit light on fixings. Those that like the richness of soy sauce might find these a winner. Worth steeping for a minute or two longer than the other brands due to the inherent chewiness. Recommended. 7/10.

Space and time only allowed us to go for a small selection of Vietnam’s instant noodles, and Omni came out ahead of the rest of the pack. But we are expecting a lot of you to disagree. So, what’s your standout instant noodle pick in Vietnam?