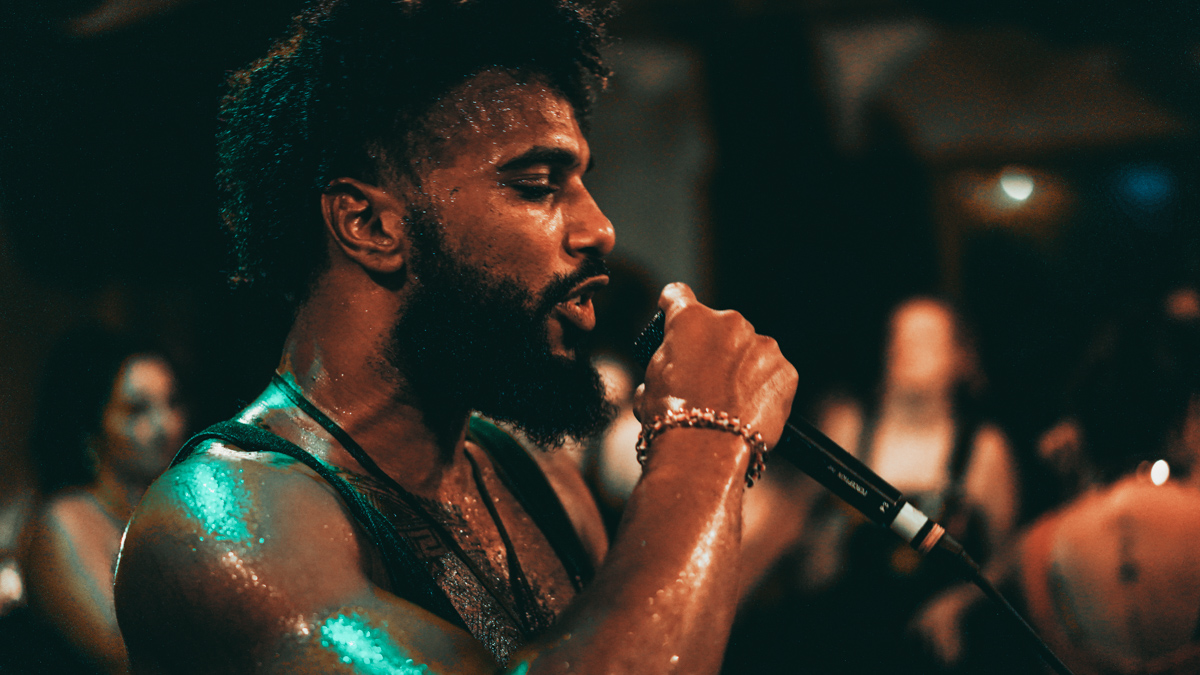 It’s Friday night and a gaggle of expats are bouncing and swaying at a hard-to-find sexy little haunt in downtown Hanoi to, as far as we know, the city’s only reggae and hip-hop group: The Gratoners. Frontman Zak Azeez’s gritty voice drives the tunes, while a guitar, bass, sax and drums help drive the sound. Energy levels are turned up to 11. Make no mistake, this is a proper band.

Azeez’s muscles bulge from his sleeveless tunic as he grips the microphone, oozing sex appeal. His close-cropped afro sits atop his head like a crown.  Needless to say, there’s a general swoon directed at him from audience members of the female persuasion. He has, as they say ‘got it.’ The lone girl in the band, the aptly named Solo (curvy, drop-dead gorgeous), balances everything out with a knowing voice, like honey.

Everyone at the gig raves about them: “They do all original songs, so they’re hard not to like,” one says.

“The bass player is amazing,” says another. “Clear and consistent.”

The crowd are not wrong either. Their sound is impressive. Each groovy tune blends into the next, creating an easy, well-practiced sound that makes one long for a distant Caribbean beach.

“If I were ever to leave this earth too soon,” he says “then somebody would know who I was and the things I believed in, hold dear and have a passion for.”

Dreams of Caribbean islands aside though, Azeez and the rest of the band hail from the usual suspects for expats in Hanoi: England, South Africa and America. They came together out of Azeez’s desperation to find people to play with in the city, and aside from all being musically creative and having different influences, perhaps what keeps them together is, they say, that they rarely fight. Not all too-common in your average rock band. If there are secret Fleetwood Mac-style scandals within the band, they certainly aren’t telling. No rumors here.

Nevertheless, you cannot have multiple kings in a lion’s pride, so it’s Azeez’s lyrics The Gratoners use as a template for their songs. He believes these original songs provide a blueprint for his life experiences and beliefs. “If I were ever to leave this earth too soon,” he says “then somebody would know who I was and the things I believed in, hold dear and have a passion for.”

Though he loves being original, it’s not that he is entirely precious about his art. “I, also, pretty much suck at singing other people’s songs,” he adds with a laugh. Regardless, it is a brave decision to not go in for covers. Most bands invariably, do a few crowd-pleasing ones, for safety as much as anything. But The Gratoners prefer to go boldly with their own tunes. They certainly have the talent to pull it off.

At first song titles such as “Do you want to Fuck?”  “Where the Fuck is London?” and “Strangers” do not seem like fodder for anything too deep. But they come from a more nuanced well than they appear, respectively stemming from Azeez’s bewilderment at people’s fear of discussing sex, the wealth gap in London and the lack of real connection between people despite living in the age of said connection.

“Performers and the audience are pretty separate back home … but in Hanoi everyone knows each other. There’s a lot more connection.”

The band’s other members themselves are no passive pups though. They know what they are doing and draw on multiple styles to arrange their songs.  The way they look is a bit of a mash-up: hairstyles range from the long and wavy to short and shaggy to almost completely bald. There’s a voluptuous one and a tall one and a rail-thin one. On stage they all rock colorful patches of Shweshwe, a dyed cotton-fabric pattern often on South African clothing, producing one ‘look’ that way at least.

“We take aspects from different genres and throw them somewhat randomly in different songs,” saxophonist Justin O’Kelly says.  Their tunes run the full gamut, a swish of jazz here, a groove of funk there, and even the occasional touch of ska. They figure they can get away with doing something a little different for each set as there are so many music venues in Hanoi to switch it up. In fact, there’s a collective exclamation when asked what it’s like to play in the Vietnamese capital. “It’s awesome!” says guitarist Jono Gibson.

“There’s a lot of creatives here and everyone comes together,” notes Solo. Bass player Jack Halo believes that it is the strong expat ties here make playing in Hanoi really special, and he is right insofar as the capital sometimes feels like the world’s biggest village.

“Performers and the audience are pretty separate back home … but in Hanoi everyone knows each other. There’s a lot more connection,” he says.

What is clear is that they are passionate about what they do and work hard at it. They are in the studio pretty much all of the time; in fact, it’s where their name comes from — a cosy little studio in Hanoi’s Tay Ho District called Gråtoner.

Aside from the studio, it’s hard to say where is next for these rising stars. Larger stages and music festivals abroad are one goal.  Time will tell, but they are shooting for the sky. Kinda. Perhaps their aims are best put by their saxophonist in a moment of excitable sincerity: “We just want to make music that people love,” O’Kelly says. “Maybe get put on Spotify and have people play it on repeat and say ‘man, their music is pretty fucking good!’” Truth be told: it is.

You can next see The Gratoners play live at the Boombox Bazaar, as hosted by W Square, Saturday. Aug. 1