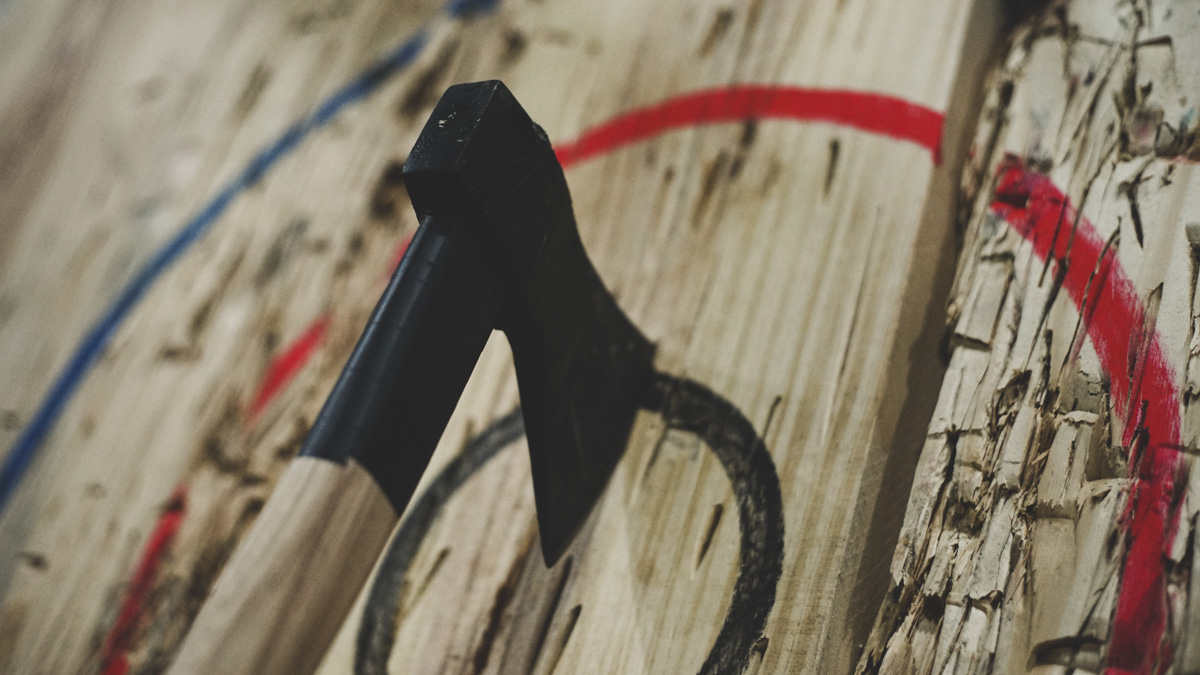 There’s something about hurling sharp, heavy metal object through the air that seems to satisfy a deeply-seated primal urge. And now, thanks to Vietnam’s first and only axe throwing club, it’s something you can experience in Hanoi whenever you like. Situated roughly between Tay Ho and the Old Quarter (an axe’s throw from now defunct drinking den The Venue), Vietaxe is the brainchild of easygoing Canadian Andrew Harris.

Harris had been spending several years shuttling between Canada and Vietnam, and knew he wanted to settle in Vietnam. But what to do? “So, I was trying to think of things that were popular in North America or Europe, and when a friend of mine said, ‘Why don’t you join our axe throwing league?’ I was like wait a second, that doesn’t exist here [Vietnam], so joined,” he says. “I made 40 new friends, and I ended up seeing them every week and it went on over a year.”

Vietaxe’s large, spartan facility was built from scratch on the site of a former tennis court that was due to become a parking lot. There’s an industrial warehouse vibe here that seems fitting for the humble act of lobbing axes at large wooden targets, and other than a simple bar selling craft booze and other beverages, the venue does not come with too many bells and whistles, a no-nonsense vibe that Harris largely intends to keep.

“If paintings on the walls are the reason you are not coming axe throwing then, well, you that is not terribly concerning for us. The core function exists. Ultimately this is a place to throw axes. If you are looking for plush leather chairs, then well…”

“I think everybody wants to throw an axe. Some people just don’t know it yet,”

On entering Vietaxe, the Chào team thinks it all looks though it is pretty easy. You are only about 3 meters away from the target. The axes are not so heavy. Harris patiently explains the technique required. It looks hard to miss. Fifteen minutes later, we have destroyed an axe, brurally damaged a wall and are probably landing about 25% of our axes into the wood at best.

The throwing is all about technique, not strength. And it can take a while to get the hang of it, especially if you decide to simply throw the tools really hard rather than focusing on getting a regular rhythm and form.

“Honestly, a huge amount of the time the women are better than the men. They listen to instructions. The thing I really like about this sport is that doesn’t matter if you are some jacked huge guy or this tiny, petite woman, the playing field is completely even,” Harris says. “Quite often a big guy is going to throw it as hard as he possibly can, and it’s not going to go in. They are at a disadvantage if they think like that. As funny as it sounds. It is an interesting date night because it is something completely new and different.”

Once you land your first few axes into the target, it becomes strangely addictive, and it is easy to imagine yourself a medieval warrior, or Viking perhaps, trying to land one in the heart of your enemy.

Stereotypically, you immediately expect Vietaxe to be full of burly men being macho (and there are a few), but what is striking is how diverse it is. Sure there are a few Competitive Dad types going at it, but there are also groups of women on a girl’s night out, and anything from doctors and lawyers right through to janitors and everything in between.

“Everybody wants to throw an axe. Some people just don’t know it yet,” Harris says with grin. And it is hard to disagree with him on that. Once you land your first few axes into the target, it becomes strangely addictive, and it is easy to imagine yourself a medieval warrior, or Viking perhaps, trying to land one in the heart of your enemy. It’s these vicious thoughts that make you wonder if throwing axes is safe. Let’s be honest: Axes. People. Throwing. It doesn’t sound like the safest combination. But Harris goes to great lengths to ensure people follow his instructions and don’t do anything stupid.

“Safety is our number one priority. I want it to be casual. I want it to be fun. But there are certain rules that have to be followed, obviously,” he says. “The moment you actually get an axe in your hand, you do get the idea that yeah, I’m holding an axe. It’s a sharp object. Most people feel a certain sense of responsibility. Certain people are a bit more cavalier, but by and large people are very responsible. There is obviously a limit to how far you can take that, and if I see anyone getting out of order I put a stop to it, but fortunately that hasn’t happened.”

At around 10 U.S. dollars an hour (250,000 VND per person for groups of less than five. 200,000 for bigger groups), axe throwing is a fun, boisterous way to while away an afternoon or an evening. Though after an hour of throwing, you can get a little more tired than you expect–turns out axes are quite heavy. Who knew? And the joy of landing your axe dead-center and hitting a bull’s eye is, simply, a great buzz.

“That’s one of the reasons that helped me make the decision to start it! One night I was at an axe club outside Toronto, and there was this couple out throwing axes, and they just kept missing the target, Harris says. “Then at one point they threw it at exactly the same time in their respective lanes and they both got a bull’s eye, at the same time. The excitement from both of them. Jumping up and down. High-fiving each other. I see that here as well, and it is one of those things, the joy that people get. It’s awesome.”