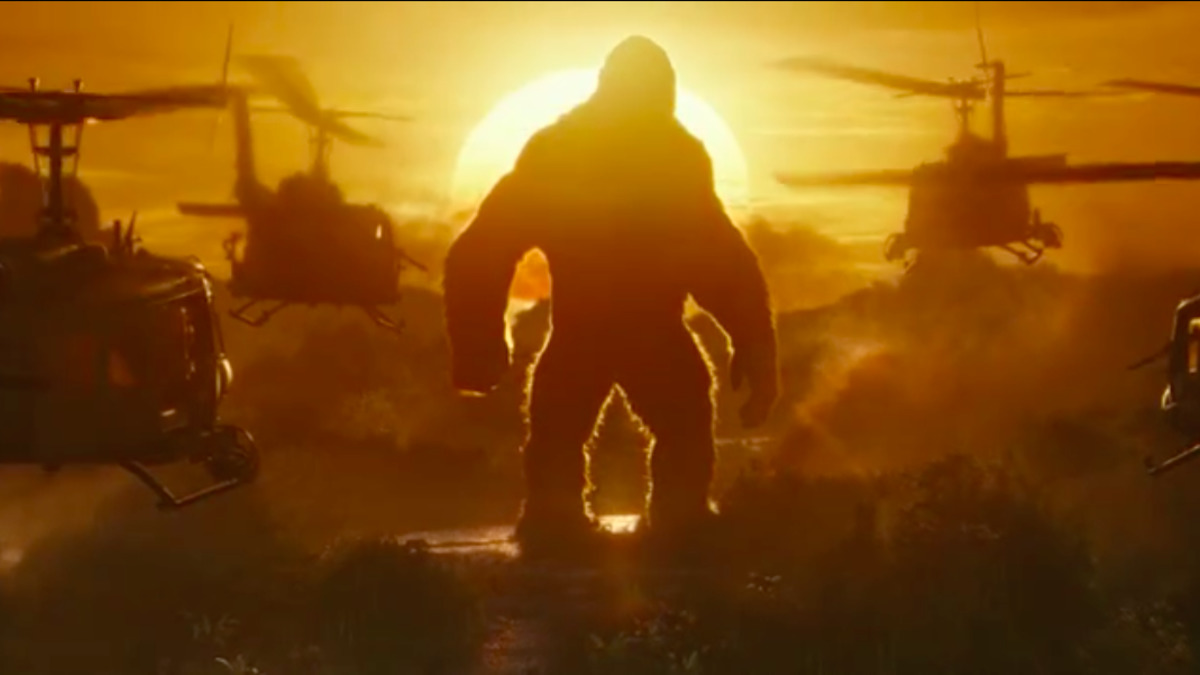 King Kong, cinema’s legendary, colossal ape, has been climbing buildings and swatting at biplanes for almost a century. Since his introduction in 1933, the terrifying gorilla has always been more than a ridiculous monster. Kong has come to symbolize a multitude of American social issues. In the 1930s, Kong served as a duel allegory for the Great Depression and a scathing indictment of the slave trade. The 1976 iteration dealt with environmentalism, using a greedy oil company executive as an antagonist. Both interpretations feature Kong mounting a symbol for America’s capitalistic hubris, the Empire State Building and the Twin Towers, respectively.

However, in 2017’s “Kong: Skull Island,” the titular beast has no skyscrapers to scale. Instead, he stomps through the untamed jungles of a fantastical island, based on the natural beauty of Vietnam, and the horrifying imagery of the American War.

The film takes place directly after President Nixon’s order to withdraw from Vietnam. As a team of plucky American soldiers looks forward to peacetime, their warmongering commander, Colonel Preston Packard, played by a cracked-up Samuel L. Jackson, leads them into one more mission to discover the mysteries of an uncharted location in the South Pacific: Skull Island.

Alongside a group of skeptical scientists and daring explorers, the cast is slowly picked off by Kong and the other deadly creatures. Although the plot reads like a campy monster flick at times, the film contains some surprisingly profound critiques of American hubris, in relation to the country’s imperialistic invasion of Vietnam. “Kong: Skull Island” is a picture that delivers nonstop action while exposing the consequences of never-ending war.

Colonel Packard perfectly embodies this overlap of American exceptionalism and American hubris. Unlike his brothers-in-arms, Packard is saddened to see an end to an unjust war. “We didn’t lose the war; we abandoned it,” he icily explains to Mason Weaver, a war photographer played by an underused Brie Larson.

For the first, shadowy appearance of Kong, the camera tilts to a bewildering Dutch angle, intensifying the otherworldliness of the enormous beast.

In one spectacularly harrowing sequence, Packard reassures his team as they fly into several raging hurricanes by reminding them of the supremacy of the U.S. army: “Remember the story of Icarus, whose father gave him wings of wax. Warned him not to fly too close to the sun. But the exhilaration was too great. So he flew higher and higher, until the sun melted his wings, and he fell into the sea. The U.S. Army is not an irresponsible father. So they gave us wings of hot Pennsylvania steel, guaranteed not to melt.” Add this to Jackson’s long-list of epically-delivered monologues.

Once safely arriving on the island, Packard’s squadron immediately drops bombs on Kong’s homeland for a geological survey. The imagery mirrors the real-life destruction of American bombers, who were ordered to bomb northern Vietnam “back to the Stone Age.” Consequently, a primeval Kong emerges, silhouetted by an angry, orange sun. The shot is a direct reference to the sunset in “Apocalypse Now.” Kong makes quick work of the supposedly mighty Pennsylvania steel. The giant ape crushes, kills and devours several pilots within a few minutes.

Miraculously, Packard and a skeleton crew survive the encounter. Unable to accept the destruction as a result of their transgressions, Packard vows to kill Kong in retaliation. As the film progresses, Packard gradually loses the respect of his men, his sanity and eventually his life, all in order to destroy what he misperceives as a threat.

John C. Reily’s character, Hank Marlow, is antithetical to Colonel Packard. Marlow is the lone English speaker on the island, after his plane was shot down during World War II. The opening scene features Marlow falling from the sky, invoking the Icarus myth that Packard would later mention. Additionally, a rival Japanese pilot is also stranded on the island and the two immediately begin to attack each other.

Before either one of them can deliver the final deathblow, Kong appears to the surprise of both soldiers. For the first, shadowy appearance of Kong, the camera tilts to a bewildering Dutch angle, intensifying the otherworldliness of the enormous beast. For a schlocky monster movie, the cinematography is often stunning.

Marlow’s story resumes decades later when Packard’s squad encounters him living among the mystical natives of Skull Island. Unlike Packard, Marlow is no longer concerned with war or his duties. In fact, we learn Marlow and his Japanese opponent eventually become close friends during their years of solitude. In a touching tribute, Marlow wields his friend’s katana in remembrance of his fallen comrade. While Packard is too distressed to abandon the war with Vietnam, Marlow is wise enough to abandon his prejudices and military duties in order to survive Skull Island. Since being cut off from the rest of humankind, Marlow has come to view war with absurdity.

This point is made clear in one poignant, funny scene. After he is discovered, Marlow asks explorer James Conrad (played by Tom Hiddleston) about the outcome of World War II. “Hey what happened with the war? Did we win?” he asks. Conrad replies, “Which one?” causing Marlow to sigh, “That makes sense.”

The dichotomy of Packard and Marlow demonstrates the limitations of war. While Packard’s Americanized bloodlust led him to aggression, paranoia, and his eventual demise, Marlow’s character shows that survival is achievable only through trust, acceptance and camaraderie. This is proven by the ultimate fates of both characters. Marlow finally returns home to his family in Chicago, his odyssey complete. Whereas Packard is killed off quickly (perhaps comedically) beside a large stockpile of ammunition and napalm. As Icarus died alongside his fragile wax wings, Packard dies among the weapons of the U.S. army.

Surrounding this well-crafted antiwar message is a gorgeous setting inspired by a mythicized Vietnam. Unlike other films concerning the nation, a majority of “Kong: Skull Island” was shot in actual Vietnam. In fact, the film has done wonders for the Vietnamese tourism industry, as many travel website advertise an adventurous tour through the film’s picturesque filming locations; namely Ha Long Bay, Phong Nha, and Ninh Binh.

The decision to film in Vietnam gives Skull Island a breathtakingly iconic look. The fantastical isle feels remarkably authentic as opposed to the CGI-extravaganza seen in Peter Jackson’s 2005 version. Kudos to director Jordan Vogt-Roberts for utilizing Vietnam’s distinctive landscapes. The mystifying, jagged peaks of Ha Long Bay are seen in the opening scene, enticing the audience to explore more of Skull Island. Phong Nha’s dank caverns are transformed into an ancient temple dedicated to Kong. Rocky karsts of Ninh Binh provide cover for giant monsters to hide behind.

A film about a giant ape has no business commenting on the immorality of the American war yet “Kong: Skull Island” does so masterfully, while also being a fun, monstrous thrill ride. The profound antiwar messaging is delivered in a way which coincidentally celebrates the eternal beauty of Vietnamese nature, a paradise once cratered by American warfare. Unlike other recent films regarding the nation, “Kong: Skull Island” is not afraid to showcase a genuine Vietnam, albeit under a more fantastical guise.