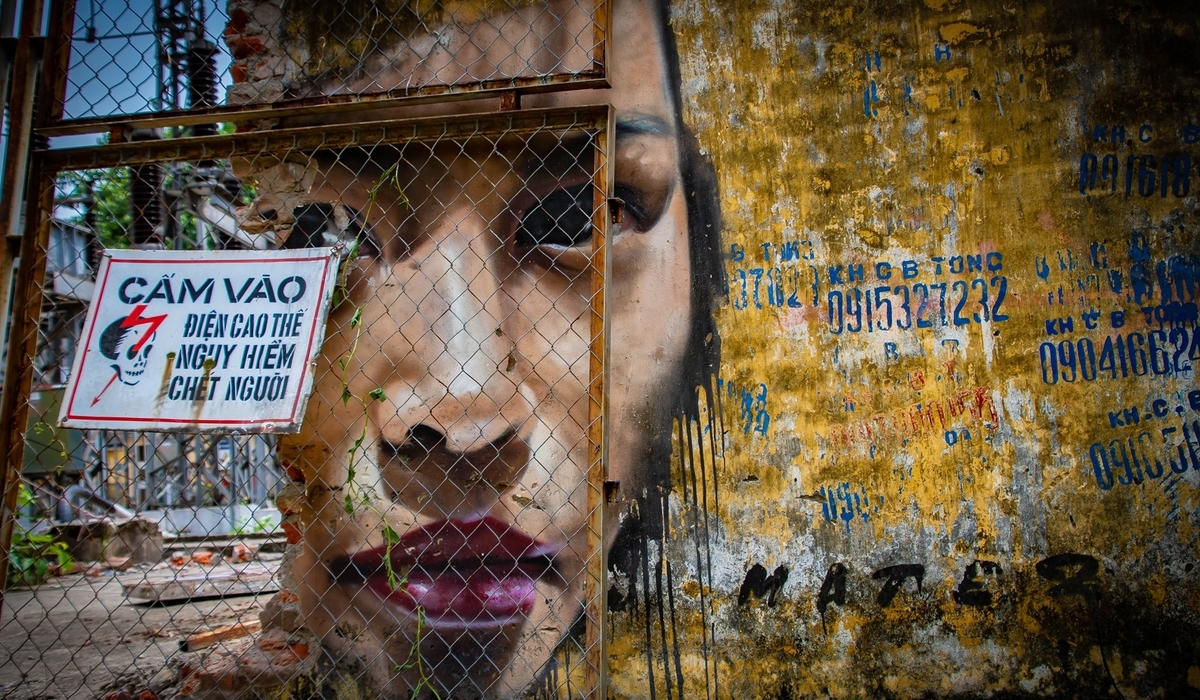 Grant Riley has been raging at the state of the modern world for years—the decline in biodiversity, climate change, not to mention political masters who seem to do nothing worthwhile. He has now got some of his thoughts down in a book (his third) “Handroid,” a novel set in a Hanoi near-future, dealing with androids and the state humanity has got itself in. Chào sat down with Riley over salted pork, roast potatoes and hot rum toddies to discuss his book and the state of the planet, on a wintery Hanoi night shortly before Tet.

He says the writing process is almost a compulsion, and the bulk of the book was written during lockdown, partly as an escape from everything that was going on in the world and partly to give clarity to the mish-mash of thoughts he was having at the time.

“I just sort of wake up, drink shedloads of coffee, sometimes with a rum in it, and then just write and write and write, not even thinking as you might imagine it. Then I go out. Go swimming, do some tasks, then come back late afternoon and edit and probably destroy two thirds of what I have written,” he says. “It becomes compulsive like an addiction. It’s an addiction, though probably healthier than heroin. Although Coleridge or Conan Doyle might argue that they just go hand in hand.”

“Handroid” tells the tale of an English AI professor who takes a job in Hanoi on a whim. The tale soon morphs into an odyssey on the limits of virtual and human consciousness, while musing on the meaning of life, belonging and identity. Despite its nod to the imminent collapse of humanity, the novel actually ends on an uplifting note, with the unexpected suggestion that there is hope for mankind after all. After years of living in trucks, caravans and treehouses, protesting and fighting the system, is Riley softening in his old age? Might he be, shockingly, an optimist? When the question is put him, he gives a blunt answer.

“No, I’m terrible. It’s all fucked isn’t it. It is all so fucked. Everything is such an overpopulated horrendous mess. We are just about leaving the Trumpian-Johnsonian era. Of course, you these have Elon Musk-type ideas about how we might colonize Mars but for me until we start actually growing trees on Mars, well it doesn’t seem like much fun,” he says.

“We are living on a dying planet. We are witness to the dying ashes of a planet. So for me to write something like this, then, yes, it is a surprise… I guess I surprised myself.”

Perhaps I am at that stage now where mentally I am just so screwed by the science, knowing that this species won’t make the end of this century. Perhaps AI is the only hope, as we can no longer trust human beings to pull us out of this shit,”

There is an obvious tension here. Riley was once—indeed, perhaps still is—part of a loose new-age movement, an amalgamation of punks, squatters and hippies who sought to literally ‘reclaim the streets’ and fight against a pre-millennial rush to modernity. His lifestyle included skirmishes with police riot squads (“they could never catch me”) and doing all in his power to stop forests being felled and motorways being built. His implication that it could be technology that saves the day and that androids might offer humankind a better way to live seems at odds with his anarcho-primitivist leanings. Most android novels, deal with cold-blooded killers, terminators and emotionless monsters that seem to want to take over the world. Riley turns all this on his head, and believes such technologies might just offer a better future.

Riley (occasionally of this parish) thinks this idealism comes from his generation, the 1980s. He read James Lovelock’s “Gaia Theory” when he was about 16 years old. This is broadly the idea that the planet is a self-sustaining organism that will maintain itself whatever humans throw at it, though the healing is fundamentally biological; Riley suggests it could be technological.

“Coming from an early generation of doom culture, which I still believe and understand, it is a bit like the steps of bereavement. Perhaps I am at that stage now where mentally I am just so screwed by the science, knowing that this species won’t make the end of this century. Maybe AI is the only hope, as we can no longer trust human beings to pull us out of this shit,” he says.

Handroid’s android protagonist, a busty Vietnamese robot called Thanh Thanh, has a peculiar vernacular that is hard to get a read on. She seems human but it is as if something is not quite right. It’s slight, but there are human things she does not quite get. “Oh, I based her on a chatbot called Mitsuku. She is one of the world’s most advanced chatbots. I assumed she was Japanese, but it turns out she is from Leeds,” Riley says grinning. You can chat to Mitsuku here.

If not quite a character, Vietnam takes a key role in the book. Having spent over five years in the country Riley is attune to the nation’s quirks, oddities and the bugbears it occasionally causes, and it shows in the book, be it the bizarre almost non-existent job interview his protagonist professor goes through, or that tropical feeling of nearly being constantly drenched in sweat.

He is good on physical description of the country too, be it the madness of the traffic (“The road users of Hanoi are notorious, ruthless, determined and impulsive with little regard for the rules or each other. This is no place for an overcautious automated robot car”) or overviews of the “temples, pagodas, banyan trees, flecked paint and mouldy walls.”

“I guess I wanted to write how hundreds of years in time can all somehow exist in the same moment, the future the past and the present. It’s beautifully clear here in Vietnam,”

The book will have a clear appeal to those with an interest in sci-fi but there will also be those that are just happy to revel in the keen descriptions of the setting alone, be it in Hanoi or Sapa. Occasionally it simply has you laughing in scandalous assent:

“There is a soundclash between the overhead PA system and a local aerobics class just over the road and occupying a corner of the pavement, under an elderly banyan tree. Middle-aged, vividly colored, lycra clad and head banded women furiously bounce up and down and perform star jumps to 1990’s hard rave music. The PA blasts music from four decades preceding that era. What kind of time-warp is this?

Time warps are something that fascinate Riley, particularly in Vietnam, a country he says is at the apex of extremes of ancient history and a very rapidly approaching modern time. “I guess I wanted to write how hundreds of years in time can all somehow exist in the same moment, the future the past and the present. It’s beautifully clear here in Vietnam,” he says.

One section is devoted to what it would be like if an extremely advanced form of android suddenly had to live among the Dao, Dzay, and H’Mong ethnic groups of northern Vietnam, people whose living styles have not changed much over centuries. The result is not quite what you expect, and you get the impression Riley hankers for a past that is no longer completely with us, but when it is put to him the answer is clear:

“The simple answer to that is no. David Lee Roth of Van Halen, an absolute genius, said. ‘I tried the simple life; it weren’t that simple.’ If you had asked me that question when I was 19-years-old I would have said ‘yes, I want live by the fire. Sod you modern world. I want to be a modern primitive,’ but I have lived it. It is wet and cold, and no thanks. Maybe sometimes, but these days I just want a nice dry bed.”

The “Handroid” book launch will be at the Snug on Thursday, Jan. 28 at 8:30 p.m. Grant will read some excerpts from the book and signed copies will be available.