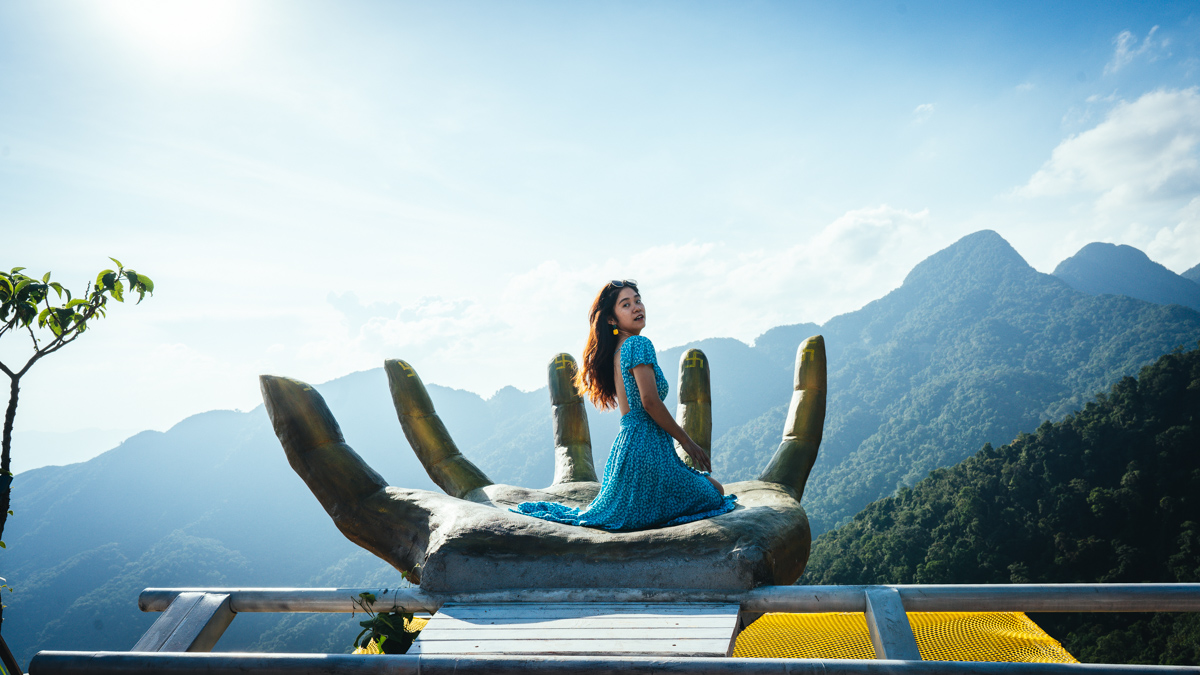 The mercury was hitting 40 degrees Celsius and the Chào publisher was manically frying an egg on the tarmac just outside a bia hoi joint in Hanoi’s Old Quarter, in what seemed like a sick science experiment.

“Dude, you can literally cook an egg out here,” he said.

“I know man. That’s not cool—in either senses of the word–we need to get the fuck out of here. Lower the temperature. Lay off the booze. Get some rest. Rejuvenate,” his editor sweated back.

We racked our brains. Nothing. So, we did what any sensible people would do and started asking random Vietnamese chicks on Tinder the best place to escape the blistering heat. Most just laughed and told us to stay home, but a quirky girl with glasses called Thuy came through. “You guys should check out Tam Dao. It’s nearly 10 degrees cooler than Hanoi and only 70 kilometers away!”

We smoke a thuoc lao, ultra-strong tobacco inhaled through a bamboo water-pipe, which for centuries shamans have claimed has entheogenic properties.

Frankly, we had nothing to lose. A friend told us that he had recently cycled to the top of the mountain where the small village lies, so we figured it a safe bet. Especially, with our trusty Honda Lead, a long term hire from the ever-excellent Rentabike, which has never let us down. And that was that. Thirty minutes later we were speeding (well, doing a brisk 50 km an hour) northward to Tam Dao in Vinh Phuc Province.

An hour later, we stopped for a rest break and a beer at a small roadside stall where we were greeted like old friends and given an series of snacks wrapped in green leaves that we couldn’t name if we tried. We told them we were from Chào Hanoi. They hadn’t heard of us. But the patrons, a gaggle of gangsterish tattooed men in gold chains, insisted we smoke thuoc lao with them, ultra-strong tobacco inhaled through a bamboo water-pipe, which for centuries shamans have claimed has entheogenic properties. Minutes later the editor was flat on the floor, dribbling, and had to be helped back to his seat while being revived with ice-water. Screw the shamans. The tobacco was too strong. It was time to leave.

Another hour on the Honda passed, and we arrived at the foot of the mountain before any serious sunstroke had kicked in, and we started the steep, winding 10 km incline to the top. As mentioned, our pal Kym had completed the climb on his push-bike just a month previously. We assumed two scrawny guy on a Honda Lead should not have any problems. We had problems. Our bike with minimal horsepower and a couple of sweaty dudes on the back struggled and spluttered to make the 20-minute journey to the top. But made it we did.

Tam Dao was different. It worked. It was romantic. The perfect place to take a date for a dirty (or clean) weekend.

And when we did, what a sight! They sometimes call Tam Dao the ‘Dalat of the North’ or ‘Little Dalat,’ and you can see for why. A twinkling little mountain town came into view with an eclectic range of buildings inspired by a mishmash of Swiss, German, French and, of course, Vietnamese architecture. It was not quite the Alps, but it was not too far off.

The Chinese often build similar versions of fake European villages across their vast country, but they are routinely dreadful and look likely built on lolly sticks. But Tam Dao was different. It worked. It was romantic. The perfect place to take a date for a dirty (or clean) weekend.

Suddenly the sweetest moment of all dawned on us. We were no longer sweating our asses off. It was cool. A quick check of a weather app showed it was a mere 27 degrees. Amost icy by the standards of a hellish Vietnamese summer. Back down in Hanoi and it was still an intense 36 degrees at 6 p.m. What’s more, cool air was whipping around the mountain creating a balmy breeze, so it felt fresher still. French soldiers once used Tam Dao as a hill station to cool off in the sweltering summer months. It is obvious why. We briefly wondered if we might even need lightweight jackets. We wouldn’t. If you need to escape the Hanoi heat, but don’t want to travel too far, then this is the place.

We opted to skip checking in with any of the tows’s myriad hotels and guesthouses to go for a stroll and get some much-needed grub. Now, while Tam Dao has many charms the range of food is not its strong point. What food you do get though, is excellent but sorely lacking in variety. The town has about half a dozen specialties, chiefly skewered meat on sticks, cooked expertly over coals by local lads with all the banter in the world. But don’t be put off by the limited options, these makeshift kebabs are exquisite: gorgeous strips of fatty pork ensconced in herbs, onions and peppers, served up with a range of spicy sauces and peanut-infused salts.

“Mountain pig, Mountain pig,” our favorite vendor and soon to be best friend exclaimed. We assumed he meant wild boar, but couldn’t be sure. Nevertheless, it was on point. The barbequed ‘hill chicken’ served here is all organic—or so they told us—its charcoally goodness hitting the spot as the mountain wind picked up and smoke from the hot coals billowed around us. The splendid fish stew (Ca bong kho nieu) that is served in clay pots and famed throughout the mountain did the job too: a Tam Dao must-try.

A curio of Tam Dao is that pretty much everyone here is on holiday. This coupled with the cooler climes puts everyone in good spirits (half the town is on good spirits), and the whole town has an upbeat resort vibe. If pina coladas were on sale here they would do well (they weren’t, we looked). Everyone from kids to students to elderly couples smile and shout, constantly calling you over to hang out: “How are you?” “Where are you from?’ “Drink beer? “Try rice wine!” “Come eat?” “Thuoc lao?” Pleasantries and fun times we indulged in to the extreme. If you are the garrulous sort, within two days you can make friends with the entire mountain. At least that’s how it feels.

We instantly knew it was an ancient ritual to honor the local mountain gods.

Suitably boozed up, it was time to find digs and we settled on The Venus, a large hotel that falls somewhere between a gaudy castle and Bavarian hunting lodge. It’s best to book ahead as this place gets full at the weekends, despite having 200-odd rooms. A decent sized double starts at 1.5 million per night, but there are plenty of cheaper options around town. As befitting an Asian 4-star hotel, Venus has a decent restaurant and bar and a superb pool, a half-hour dip in which will soon have you feeling like a Roman god.

Awakening slightly groggy next morning, it was time to explore the sights. Truth be told, there is not a huge amount to do in Tam Dao—it’s all about the mountain atmosphere. The whole point is just being there and taking in the stupendous views, which go on for miles and miles. On a clear day it is said that you can faintly see Hanoi in the distance.

“Oh no. It is just our staff party,” a young office worker said, giggling at out stupidity. “We just wanted to get drunk and start a fire.”

There was a small waterfall, but we had arrived in the dry season and it was nothing more than a slight trickle. There’s also a neat temple brilliant located within a thick bamboo grove, about 300 meters up some ancient granite steps. The handsome temple is not particularly notable expect for a small section filled with stunning, what-look-like marble Hindu and Buddhist icons, with giant butterflies gently flitting between them. The statues seemed to be staring straight at us, telling us some deeper secrets. Well, that or the DTs were kicking in. It was hard to be sure.

It was beginning to get dark and we chanced across a large bonfire in the middle of a square. Scores of young Vietnamese had formed a large circle and were dancing around the flames in what looked like some pagan ceremony. We instantly knew it was an ancient ritual to honor the local mountain gods and soon joined in, asking the locals the meaning behind these ancient rites. “Oh no. It is just our staff party,” a young office worker said, giggling at out stupidity. “We just wanted to get drunk and start a fire.” Fair enough.

After a bit of fire dancing, we went out in search of a yet more beers. Outside the endless karaoke joints there is not much nightlife life in Tam Dao. It is very much a beer, rice wine and barbeque sort of place, so we got into it for a second night. Staggering around, we were invited (yet again) to break bread and dine with a group of young Vietnamese holidaymakers.

This time it was with the Vietnamese fencing team. We didn’t realize that Vietnam even had a fencing team but it appears they do, and they like to eat and drink, and eat and drink again. They kept plying us with ever more liquor, but after much pleading and begging they reluctantly let us leave home shortly after 3 a.m. but only after making us promise to join them for another bender the next day. Vietnamese guys on holiday don’t muck around. Not fencers at least.

The next day it was time to visit Tam Dao’s final ‘tourist attraction,’ a beautiful Catholic church built in the early 1900s. It was a Sunday, so a fitting time to visit. A large group of Vietnamese school-children were inside, resting their head on the pews in completely calm, and we admired their spiritual devotion. Though on closer inspection it was revealed they were just sleeping, having clearly been dragged there on a school trip they were not interested in. Nevertheless, it was a wonderful church with beautiful stained glassed windows, with many people gathering around the grounds to slurp ice creams, take selfies (oh, so many selfies) and plot the rest of their day. We were starting to fall in love with the mountain and its strange buildings and trippy liquor.

Tam Dao is certainly not for everyone though. It is one of those places that seems to have popped up because of tourists and tourists alone. The bizarre hotchpotch of buildings ranging from the neo-gothic right through to borderline Bauhaus will be fun to some and ungainly to others. More refined visitors may find it a little too kitsch, tacky even, though Chào would hearitly beg to differ. But, surely, it is the atmosphere that reigns supreme here–the absolutely stunning views, cool breezes and mystical qualities of the mountain really get you, and all just a two-hour bike ride from the capital. If you are looking for a cooling mountain escape just a stone’s through from the city, then Tam Dao is just the tonic. Just go easy on the local rice wine. That stuff is no joke.