[Review] Top of Hanoi: a 360 degree view of a magnificent cityscape

[Review] The Unicorn Pub: cocktails with a Vietnamese twist

[Review] Bao Wow: a bar with plenty of bite 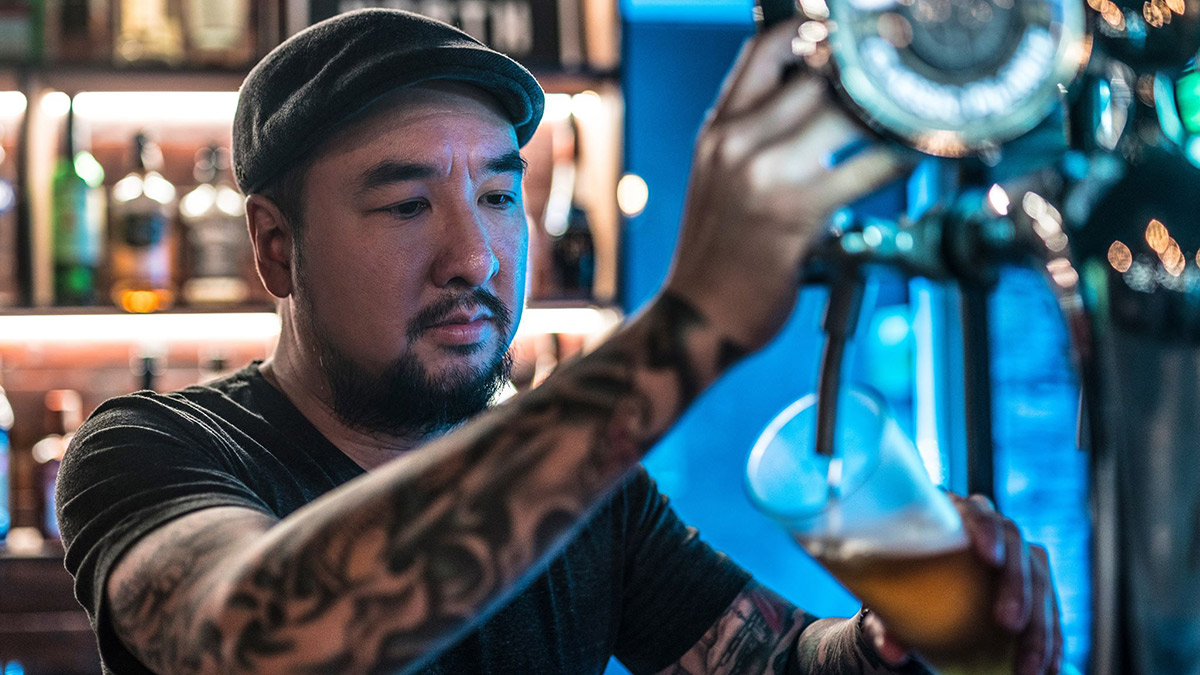 Situated in the hubbub of Hanoi’s Old Quarter, in many way the capital’s beating heart, lies Northern Soul Rooftop Bar. Eschewing the obvious commercial approach you would expect a bar in this busy tourist district to take, the bar is fresh, unique and born of heart and, yes, soul.

Wearing his trademark gray flat-cap and a thick gray hoody, Vietnamese-Canadian and owner of Northern Soul, Hai Vu speaks animatedly about his love of music and bar-life, over a few cold pints on a cool Hanoi night.

The city lights up, tourists drunkenly stagger from shop to shop as the hawkers and shoeshine boys hustle all they can.

“About 10 years ago I was in a punk band and we were playing our final show, the lead singer wanted to quit the band because he had some issues, and we didn’t want to continue the band without the lead singer,” he says. “People were asking, ‘What do you wanna do now?’ and I said ‘Well, I don’t know, maybe I’ll open a bar,’ and years later it has finally materialized.”

Northern Soul is named in part because Hai Vu has always lived in the north, whether in Hanoi or Canada, but mainly because it is one of the (many) music genres he likes. This soul music originated in northern England as the British mod scene began to embrace the soul music of black America, it is upbeat, uplifting music with a fast tempo that makes you want to dance. It is the soundtrack to the bar and is at least part of the reason why everyone in the bar is invariably in a merry mood, slamming craft beers and ordering cocktails as they tap feet and nod their heads to the frenetic soul beats. Hai Vu had a clear concept for his bar and is sticking to it.

“One of the main rules I had when I opened this bar was that I don’t want any surprises. For example 60% of the time when I go to Hanoi Rock City, they don’t play Rock music. I know it’s a great venue, but they opened it up for all kinds of music, but you know with the name Hanoi Rock City, you want rock!” he says “So with this bar Northern Soul I want people to come here and know exactly what they are getting, it’s gonna be that music. I don’t want the whole vibe to change.”

Funky music aside, one of the cool aspects of the bar is the incredible vantage view of the Old Quarter; you get a birds eye of view of what can usually be a claustrophobic, albeit fun area. The city lights up, tourists drunkenly stagger from shop to shop as the hawkers and shoeshine boys hustle all they can. Watching all this, detached from the fray with a cold pilsner in hand makes for quite the evening.

“Besides, my girlfriend Huong is a bartender. She’s from Vietnam, But she didn’t push me [to open] of course. I’m not white!”

Though in the Old Quarter, Northern Soul is a touch more sophisticated than the average back-packer fair commonly offered in the district, and you are more likely to find someone here wearing a silk scarf than a Chang beer tank top. It is also a touch difficult to find, which on arrival gives it a clubby, speakeasy vibe, like you have to be in the know to get in, an atmosphere which is set off by the music, original and little known.

For someone who has by his own admission never worked in a bar before, opening an elegant rooftop bar in the heart of the city’s bar scene seems like a bold move fraught with risk, but Ha Vu is relaxed about it, and seems to take everything in his stride.

“Nope, I have never worked in a bar, just drunk in a lot of them. I wanted to stay in Vietnam, I have a home in Canada, but I felt like I have been coming back and forth between here and Canada for the past 10 years, and for the past while I’ve found myself being more at home here than Canada,” he says. “Besides, my girlfriend Huong is a bartender. She’s from Vietnam, But she didn’t push me [to open] of course. I’m not white!”

The excellent craft beer collection is carefully chosen, including a superb pilsner that comes under the Northern Soul’s own brand, which can also be found at Hanoi’s Bottle Shop as well as the city’s iconic underground bar, Nameless.

“My idea was always about opening something in the Old Quarter, the rooftop ideas only came up when I found this location. I just wanted a small bar so that my friends would come often, no pressure on the rent.  I saw this place and the night after I made my decision, I took it, that’s the way I work. One good thing about a rooftop bar is that, if the weather is nice, people will come.”

Though open for only three months so far, Northern Soul is already seeming to find its niche as a hip urban space, the décor is refined and spare, everything beautifully lit, replete with vintage posters of legendary soul singers such as Otis Redding and James Brown. The excellent craft beer collection is carefully chosen, including a superb pilsner that comes under the Northern Soul’s own brand, which can also found at Hanoi’s Bottle Shop as well as the city’s iconic underground bar, Nameless.

A fun addition is that while Northern Soul is not doing its own food, Hai Vu orders in food from a few standout restaurants from this city so if you are feeling hungry you can order a slice from NYC Pizza or a dish from Chopsticks for all your Vietnamese classics.

For a fun night out that offers something a little more sophisticated than the discos and endless bia hoi joints that litter the area, then this this is surely the spot, a new addition as one of the best rooftop bars in Hanoi. As Hai Vu says: You know, who doesn’t like soul music, everyone loves it, to tap their feet to it and move to its beat. I love the name Northern Soul. And you know, Hanoi is in the soul of North Vietnam; it seems perfect.