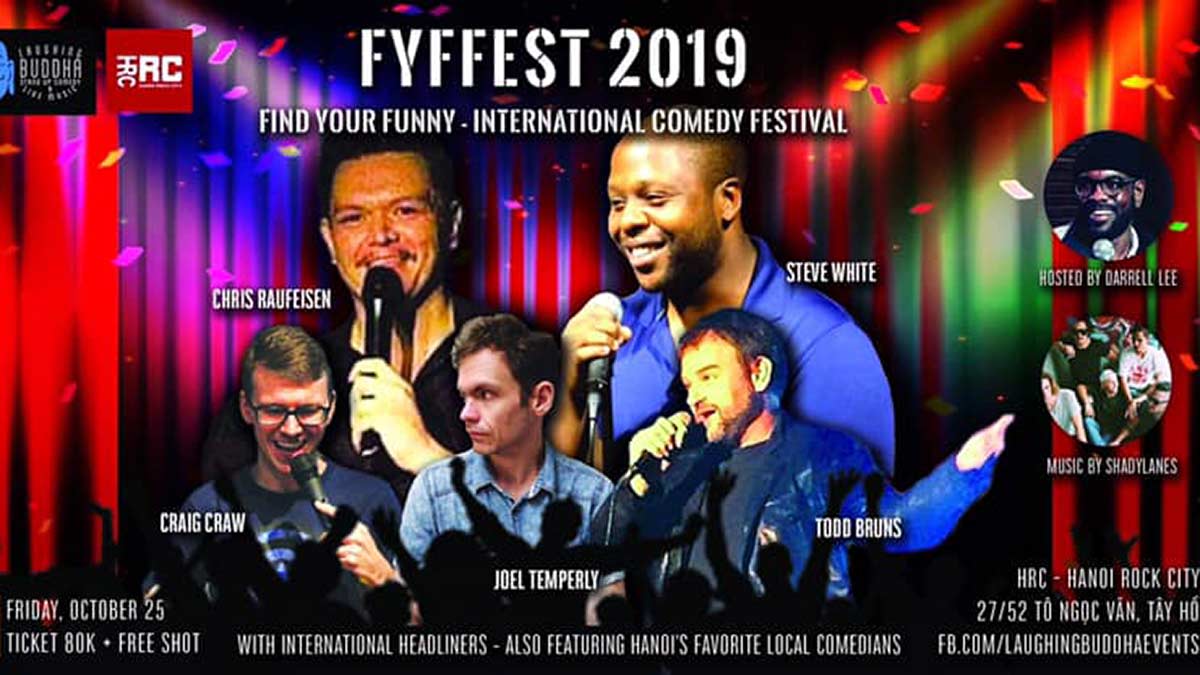 Laugh your butt off at what’s been said to be the biggest and funniest lineup of comedians to ever hit Hanoi, Vietnam. Our visiting comedians from around the globe are sure to make you FIND YOUR FUNNY and leave wanting more.

AND if that wasn’t enough, we have one of the best leading bands in the country -SHADYLANES opening up the show and taking you to a funky place. With their beachy sound that spans genres of rock, pop, reggae and funk, SHADYLANES will set the tone for an evening of laughter and fun. This promises to be truly a night you will always remember.

GATE FEE: 100K OTD – Gets you in and one free HOLLYWOOD VODKA shot at the door
Limited seating so get here early

SPECIAL: Guests Receive 30% off Tattoo Voucher and 25% off Travel within Vietnam voucher from our sponsors for attending the show

Joel Temperly (AU)
Joel Temperly cut his stand-up comedy teeth in Chengdu, China. While in the area, he made people laugh in Shanghai, Beijing, Xi’an and Chongqing. He’s also performed in his home town of Melbourne, and popped into Singapore recently. After two-and-a-half years living in China, Joel has a few things he’d like to get off his chest about the place (all good things, of course). He’s also got a Russian girlfriend and is an English teacher; the jokes basically write themselves with this guy!

Todd Bruns (KS)
Todd got his start 5 years ago with Stand Up Seoul. He has performed all over Asia and has shared the stage with top level touring comics including Andy Curtain, Aiden Killian, Ben Kronberg, Turner Sparks, Ollie Horn, and Pete Grella, along with being a regular fixture in multiple comedy scenes. Currently, Todd performs regularly all over Saigon and runs a show at The Tavern in District 7. Highlights include being the only civilian to host at a US Military comedy mic at Korea’s O’Lounge, getting laughs at The Comedy Store in Hollywood, and performing comedy at his favorite bar in his native Lawrence, Kansas. Todd is one of the world’s finest Connect 4 players.

Craig Craw (SCT)
Craig Craw has roughly 2 and a half years of comedy experience, having performed many times in Thailand, Vietnam and his native Scotland. He can often be found in his current base city of Bangkok, Thailand as a regular performer at the Khao San Comedy club, delivering his deadpan and self deprecating humor with cheeky and witty observations of the world and it’s sub-cultures.

The hilarious Chris Raufhausen & Steve White will be Headlining the show!

Chris Raufhausen (USA – CHICAGO)
Born in Bangkok, raised in Chicago, former U.S. Marine Infantryman, comedian Chris Raufeisen is often remarked as a king of the dudes. In his 3 years career he co-founded the cities longest running open mic RAW Comedy. With his dark and dirty joke writing he opened for the legendary Doug Stanhope in 2018, and he has been a top finalist in Magners International Comedy Competition 2017 and 2018. He founded Bangkok Roast Battle, and roasted at a professional MMA fight (Full Metal Dojo 2019) and commentating a bout or Fox Sports Asia. As of 2019 he has won every local competition for best new material, and was recently flown to Nepal for an International Comedy showcase. He is a resident comedian at Khaosan Comedy Club where he does shows daily. Find him on Instagram at Raufgod or on his facebook page Comedian Chris Raufhausen

Steve White (USA – CHICAGO)
Steven White is an American comic who has performed for audiences in Thailand, where he lives and performs regularly, as well as the United States, England, and Malaysia. Steven first came to Thailand in 2017 and since has become a local favorite after performing there regularly for the past two years. In his hometown of Chicago, Steve recently won 1st place in the Hot Shot Comedy Competition. Abroad, he has performed alongside several international headlining comedians; Ahmed Ahmed, Robby Slowik, and Liz Miele to name a few.
Don’t miss your chance to be a part of the show and see this phenomenal lineup. Get your tickets at the door.

Hailing from SA, AUS and NZ, Southern Hemisphere’s Shadylanes draw on influences from their home countries, creating a stylistically-eclectic, beachy sound that spans genres of rock, pop, reggae and funk.

Rowan, Nache, Dan, Justin and Gabe found each other in the midst of Hanoi’s concrete jungle, and the cheeky five-some is now bringing a unique energy to the city’s diverse music scene. Join them for a sensory experience that’ll get you on your feet and out the gate!