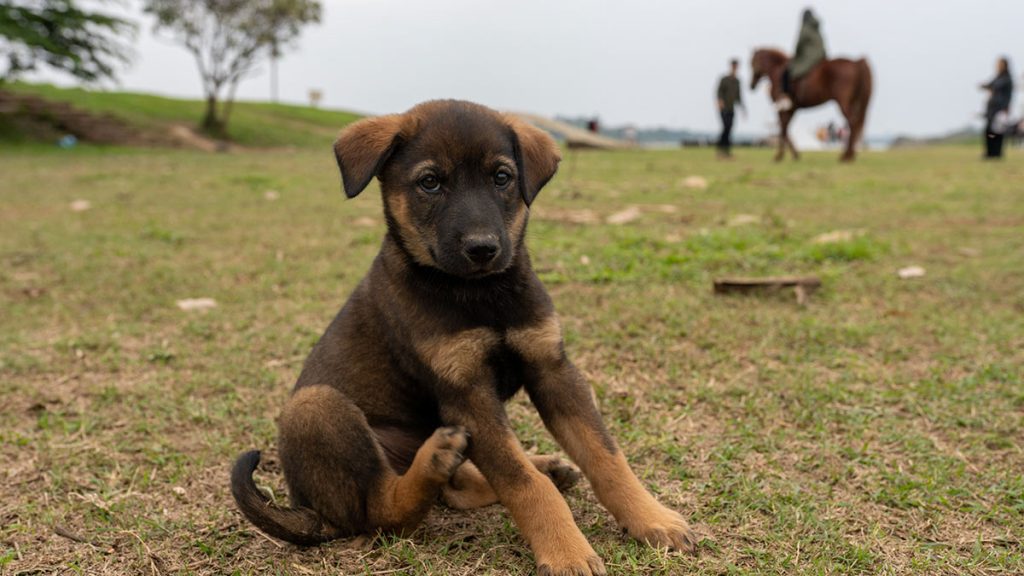 It hasn’t all been cuddling kittens and playing with puppies for the people who have made it their mission to save Hanoi’s abandoned pets, for many are willing to face harrowing circumstances for their four-legged friends.

“Outsiders look at us and think that we’re some sort of superheroes. But we’re not,” Nguyen Quynh Trang says. Trang used to be a foster parent but now, she’s responsible for pet adoption interviews at Hanoi Pet Adoption (HPA).

Doing her weekly volunteer assignment at HPA’s shelter she is holding a basket of snacks. Instantly Trang becomes a target for the dogs. They quickly swarm around her, barking and reaching for the food. The young volunteer holds the basket as high as she can while her clothes are printed with dusty paws. The scene is chaotic but this seems to be the norm for Trang.

Trang came to know of the shelter via a highschool friend named Linh, who is the co-founder of HPA. Linh, full name Nguyen Le Thuy Linh, founded the pet shelter with Pham Khanh Quynh. At first, it was just a small Facebook page for people to post information about stray dogs and cats.

Back then, the group didn’t have any sponsors or facilities, so they had to shelter the animals at their homes, and put in their own money to provide the necessities like food, heat and medical care. They also received funds from the community but it wasn’t enough.

“We’d rather that the animal be safe at the center than be placed in an unfit home,”

Medical costs were the biggest challenge. Dealing with strays, it wasn’t just vaccines and neutering. A lot of times, the animals were severely injured or had been born with disabilities. These animals needed to be hospitalized for a long time. For these cases, HPA had to pay for the hospitalization fees on top of treatment and medication for the wounded creatures.

Gradually, the group gained supporters at the vet clinics where they frequently visited and the medical bills became less of a nuisance. Aside from that, they established credibility among animal lovers, drawing in big sponsors like: Me-O and SmartHeart Vietnam. HPA also started selling merchandise to fund themselves.

Though the organization has created a decent shelter, finding a home for the pets is still their main goal. However, the center will turn down adoption offers if the person is not eligible. Nguyen Thanh Hien – volunteer and media counselor for HPA, said that the center would not give their pets to somebody who is financially unstable, no matter how much they love the animal. Another big no-no for the center is when the interviewee refuses to have their pet neutered. “We’d rather that the animal be safe at the center than be placed in an unfit home,” Hien says. She says that the center will take back pets if the adopter doesn’t feel they are compatible anymore.

Up till now, HPA has achieved many successful rescues but the shelter still has a long way to go. Dog and cat markets are abundant in Vietnam. It’s common knowledge that a big number of these animals are stolen. As much as they want to, HPA refrains from buying these animals concerned that pet thieves (cẩu tặc) will take advantage of them. If pet thieves know that young passionate volunteers will pay any price to save an animal’s life it opens up a whole new market. Volunteers still sometimes intercede in those situations of course, but only when absolutely necessary.

Since HPA is a self-made organization, they don’t have any proper training or government support and this can be a challenge

“It’s not easy to organize a professional team,” Trang says. She recalls a case of a stray dog being reported, but the person who found it refused to keep an eye on it. Once she reached the spot, it was too late and neither the dog nor the person was found.

Trang has many similar stories. People make a report and expect that is enough.  Trang laughs about the times when she has had to drive in the middle of the night to save a dog or deal with a feral animal with zero experience. In the beginning, she was just a young girl who happened to harbor an immense love of animals.

Trang is not the only one who feels this way. Most volunteers are also students or they work full-time and being a volunteer takes a toll. Trang admits that she has thought about quitting in the past but then she wonders “What would happen to an animal if I can’t save it?”

There’s no doubt that she loves the dogs at the shelters. She remembers all their names and when she looks into their eyes, seeing them so happy cheers her up. If only people would love these pups just as much as she loves them, then Hanoi’s stray dog and cat problem could be quickly solved.