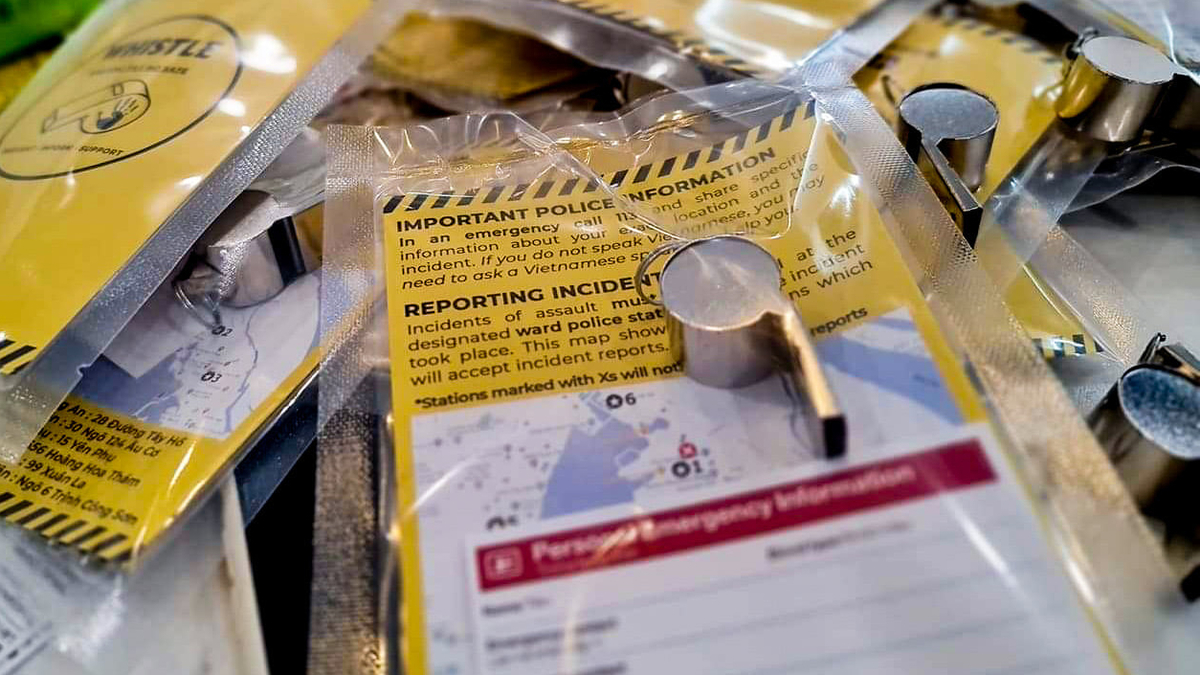 A group of Hanoi residents have started a community organization to help people feel safer on the city’s streets, after a string of sexual attacks were reported in Tay Ho District over the last six months.

Whistle Tay Ho aims to help protect people on the streets as well, as to educate them as what best to do if they are the victim or witness to an assault.

The group includes representatives from local businesses such as Turtle Lake Brewing, Star Kickboxing and Fitness, Anita’s Cantina, Bao Wow, as well as Batik International, an NGO that aims to empower disadvantaged people and communities, with a particular focus on gender.

Whistle Tay Ho are also communicating with Tay Ho District police to maximize the effectiveness of their campaign. There are also volunteers from the community bringing a range of expertise from editing and translating right through to counselling and medical advice.

The group’s objectives are to “prevent assaults, inform the community and support survivors.”

Whistle Tay Ho provides safety kits, which contain a whistle that people can use to bring attention should they be involved in any kind of street assault as well as an information pack containing maps and addresses of local police stations should they need to report an attack, emergency phone numbers, a card people can fill out with their identification, and details of what individuals can do if they are involved in an incident. Almost 2,000 packs, both in Vietnamese and English, have been given out so far.

While the whistles are useful, the group are quick to clarify that their campaign is as much about informing the community about being safe as it is about making literal noise.

“Sure, the whistle is a practical self-defense mechanism but actually is a more symbolic call to action,” said Nathalie Grun, one of the group’s founders. “People have been super concerned since the attacks started, and it got very emotive. We are trying to be information-led, so people know what they need to do if something happens.”

Gemma Dunne, owner of Star Kickboxing and Fitness, also one of the founders of the group, has seen an uptick in concern in the local community, particularly as she helps to run self-defense courses.

“People have been worried. Hopefully our classes go some way to helping people feel safer. When people are worried they often go about doing this the wrong way,” she said. “I have heard a few people saying that they should carry a weapon, but that is clearly not the way to go. Aside from it being illegal, there is tons of research that shows unless you have been specifically trained to use a weapon, carrying one is dangerous. It’s likely someone could end up using it on you.”

Dunne’s husband, martial artist Mai Ngoc Phu, has spent many years working in national security in Vietnam and has been helping Whistle Tay Ho liaise with local police to ensure they have approval and are going about everything the right way.

“I have spoken with senior police officers at Tay Ho District as we obviously want to work with them, and make sure all the advice we give is proper and actually helps. I often work with women who have been the victims of violence so I know the damage it can cause. So if Whistle Tay Ho can do anything to help then I will aid them as much as I can.”

Aside from the information packs and the community meetings the group are also establishing a regular meeting for survivors of sexual assault (both men and women) who have been traumatized or simply need to talk.

Additionally, the group is also working on a “safer business” training program with Batik International to implement standard operating procedures across the business community to support the whistle campaign objectives, which includes plans to initiate a “security watch” system with security guards and parking attendants in the area.

If anybody would like to support or become involved in Whistle Tay Ho in any way, they can be contacted on their Facebook page.