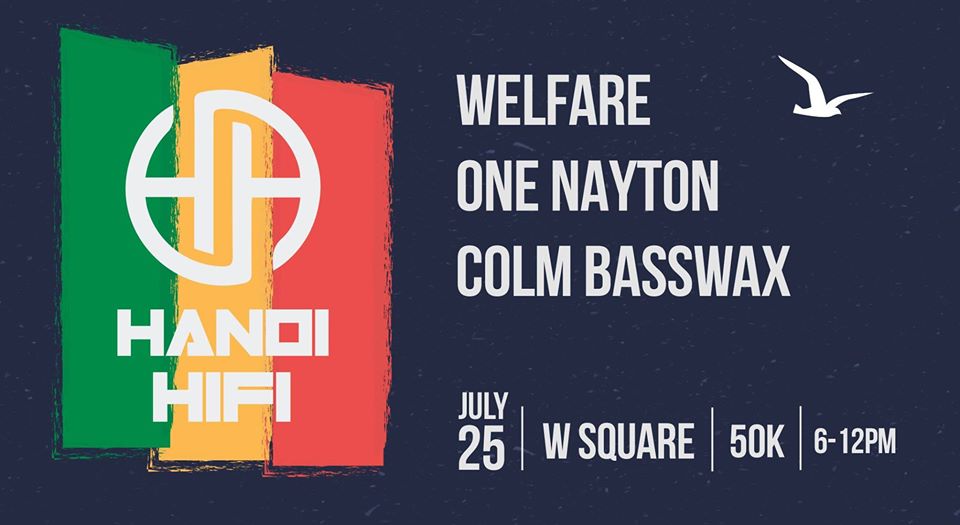 Calling all Hanoi reggae heads! Hanoi Hifi will be taking over W Square for an all day session of Roots, Hip-Hop Dub, DanceHall, Dubstep, Dub Techno and all

Calling all Hanoi reggae heads! Hanoi Hifi will be taking over W Square for an all day session of Roots, Hip-Hop Dub, DanceHall, Dubstep, Dub Techno and all things Reggae!

– Colm Basswax –
Basswax head honcho and long time choon churner CBX has been lighting up the dance for over a decade. Known for his love of Hip Hop, Reggae and all things Electronically Bass, expect a double delight combo of flavoursome beats served with lashing of low end rumble. The Basswax club night has had ravey parties in Toronto, Busan, Shanghai, Hanoi, Cork and Galway!
https://soundcloud.com/waspcatcher
https://www.mixcloud.com/waspcatcher/

– Welfare –
Welfare is an Irish electronic music DJ/Producer/Promoter/Label owner/Sound System Operator.
Active since about 2007, he’s played more than 450 gigs & festivals all over Ireland, the UK, the U.S, India, Canada and Asia as well as on continental Europe.
He has releases on ZamZam Records (vinyl EP with Sam Binga) and !Kaboogie Records and has remixed such accomplished acts as Sully, Lakker, Prince Kong, Commix & Etch.
Welfare also recently dropped the album “5year*no:plan”,a selection of varied electronic productions from 2010-2015.
https://welfarebeatz.bandcamp.com/album/5year-no-plan

He was a long term member in the late 00s of “DubCulture’ , Ireland’s first Dubstep/Bass music crew and record label, is the man behind the Jungle Boogie! collective a nationwide old school Jungle crew as well as the promoter at the Get Boogie! clubnight in Galway.