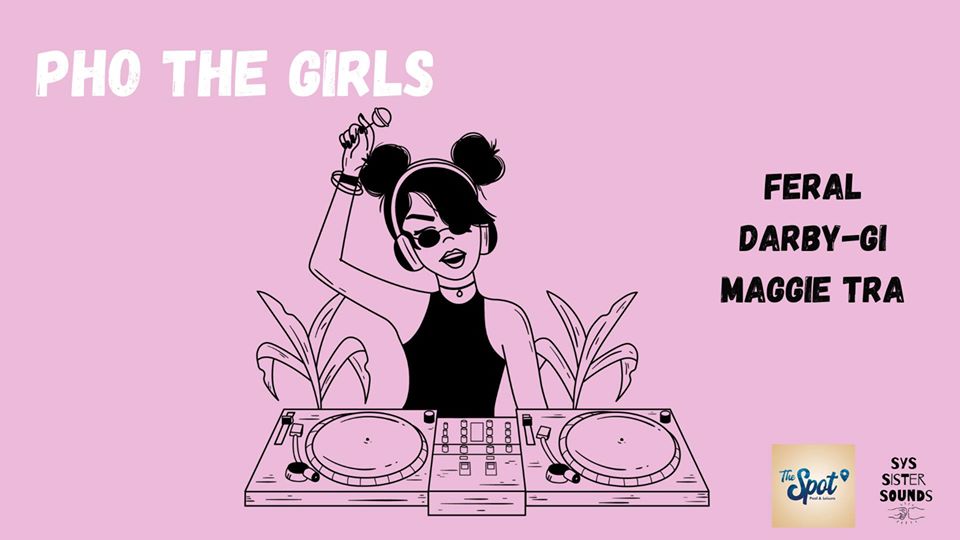 Pho The Girls is taking over The Spot with a pool party. Catch DJs feral, Darby-Gi & Maggie Tra providing delicious tunes whilst you swim to your hearts

Pho The Girls is taking over The Spot with a pool party. Catch DJs feral, Darby-Gi & Maggie Tra providing delicious tunes whilst you swim to your hearts content.

feral
feral is an aspiring DJ native to San Francisco, California. Growing up in the eclectic Bay Area music scene, her influences range from early 2000’s Hip Hop and R&B, to Techno, House, and Nu Disco. As a full-time hairstylist and beauty industry professional, she brings a lifelong creative perspective making her music selections a cut above the rest. feral has recently completed intro and advanced workshops with SYS Sister Sounds: Pho the Girls and a performance at Kobala in Tay Ho, Hanoi.

Darby-Gi
Compulsive UK digger, Darby Gi, graces the one’s and two’s with a kaleidoscope of rhythm. Melding ambience, soul, garage and everything in-between to get your hips moving.

Maggie Tra
A hint of sweet with a dash of spice, spell-bounding smooth selector Maggie Tra uses the world as her playground. The Australian born Khmer/Viet DJ sets bring finesse and flair to the dance-floor by embracing the culture of the land she’s in with wholeness and conviction. Whether she’s spinning Hip Hop, Soul, RnB & Disco tunes, Maggie mixes with genuine originality with a strong focus on spinning womxn in hip hop. She has the effortless ability to parcel every mood into a musical excellence. The emerging DJ’s love for travel has allowed her to grace the decks in Brussels, Berlin, London, Australia, India, Nepal and Vietnam.