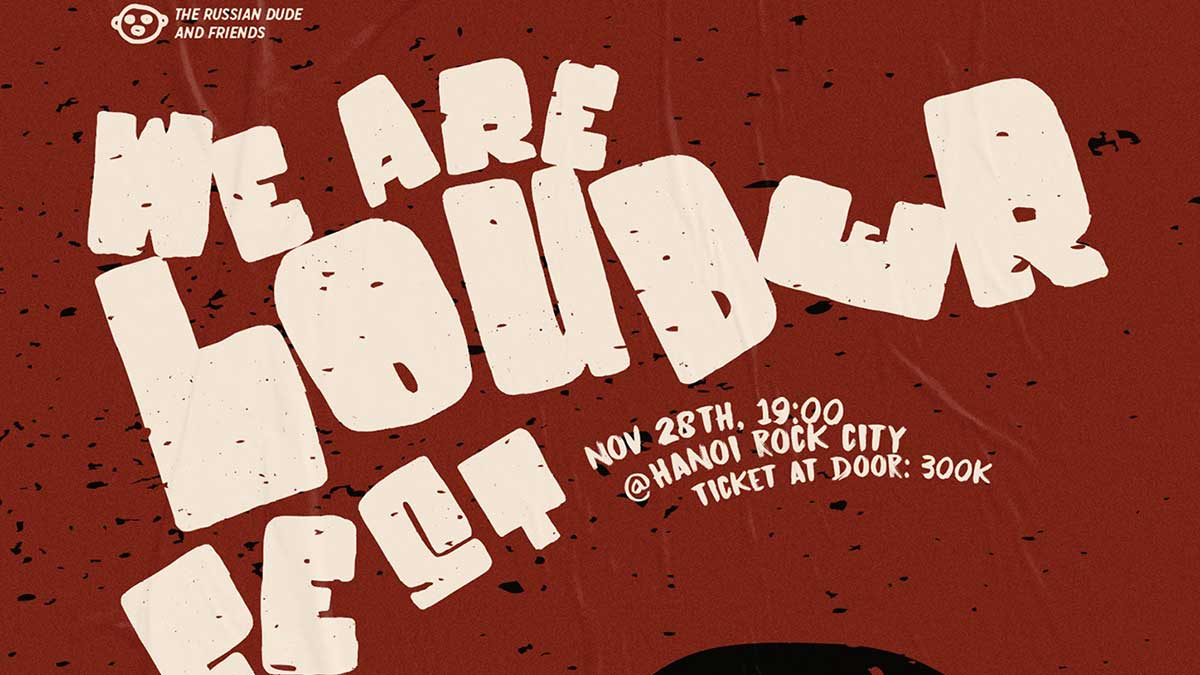 We are happy to announce that after Saigon’s WE ARE LOUD fest in the end of November, we organize another event which is gonna be even LOUDER! Hosting New Orleans

We are happy to announce that after Saigon’s WE ARE LOUD fest in the end of November, we organize another event which is gonna be even LOUDER! Hosting New Orleans sludge metal band EYEHATEGOD, a rockabilly band THE MONSTERS from Switzerland, New Zealand’s garage punks THE CAVEMEN, Saigon’s d-beat noise duo TIMEKILLER and a few local bands together with them.

EYEHATEGOD is an American sludge metal band from New Orleans who formed in 1988 and is considered as one of founding acts of the whole genre of sludge metal. The genre was originated through combining elements of doom metal and hardcore punk. It is considered as heavily influenced by bands like Melvins, Carnivore, The Obsessed, Black Sabbath, Celtic Frost etc. Through the years the band developed their sound from more hardcore oriented towards the elements which you can find in nowdays post metal, doom metal and stoner rock. The band featured Phil Anselmo of Pantera and Randy Blythe of Lamb of God on a number of their live performances and toured with bands like Discharge, Pantera, Toxic Holocaust, Chaos UK, Corrosion of Conformity etc. We are REALLY excited to host them on this show!!

THE MONSTERS were formed in 1986 in small-town Bern, Switzerland. Their sound is a fuzzedout mix between 60-s garage punk, wild teenage trash rockabilly and primitive rock‘n‘roll. Its 187% no MTV and top 100 shit! The actual lineup is guitar, bass and the so-called clonedrum: means 2 drummers with only 1 1/2 drums, hitting thhe same bass drum from each side. Besides the countless shows in Switzerland The Monsters played extensive tours through Europe and both South and North America. In 2005 they toured in Japan and this time is their first time in South East Asia! GO SEE THEM LIVE ON STAGE! THEY BLEW YOUR BRAIN AWAY WITH LOTS OF CHAINSAW MASSACRE GARAGE PUNK AND PRIMITIVE ROCK’N’ROLL TRASH!!

THE CAVEMEN – tired of waiting around for the world to end or to be abducted by aliens, four delinquent cretins were brought together by dumb luck and a shared love of Rock’n’Roll. They learnt three chords and started busting out face melting music. Soon they will be playing at your wedding, Pak’n’Save opening or naked pot party. Influenced by Stooges, Cramps, The Sonics and all that 60-s garage punk trash vibe!

TIMEKILLER – formed in Arizona, US the band went through a numerous of lineup and location changes going through places like South Africa and Brazil and then finally ended up located in Saigon few years ago. They put up a new album while in Saigon and it’s probably the best one of the band for the day, recorded and mixed by Alec of Ếch Ếch Studio. It features an amazing mix of d-beat, crust, sludge and a lot of choas and noise on top of it. The band currently performs as a duo, with only guitar and drums.

CÚT LỘN is the one and only đại học core band of Vietnam playing crossover thrash tunes in the vibe of Municipal Waste, Toxic Holocaust and DRI sort of shit, mixing it with the lyrics about 7-to-17 years old kids life and becoming a meme around the Internets right after every single show – thanks to their stupid outfits.