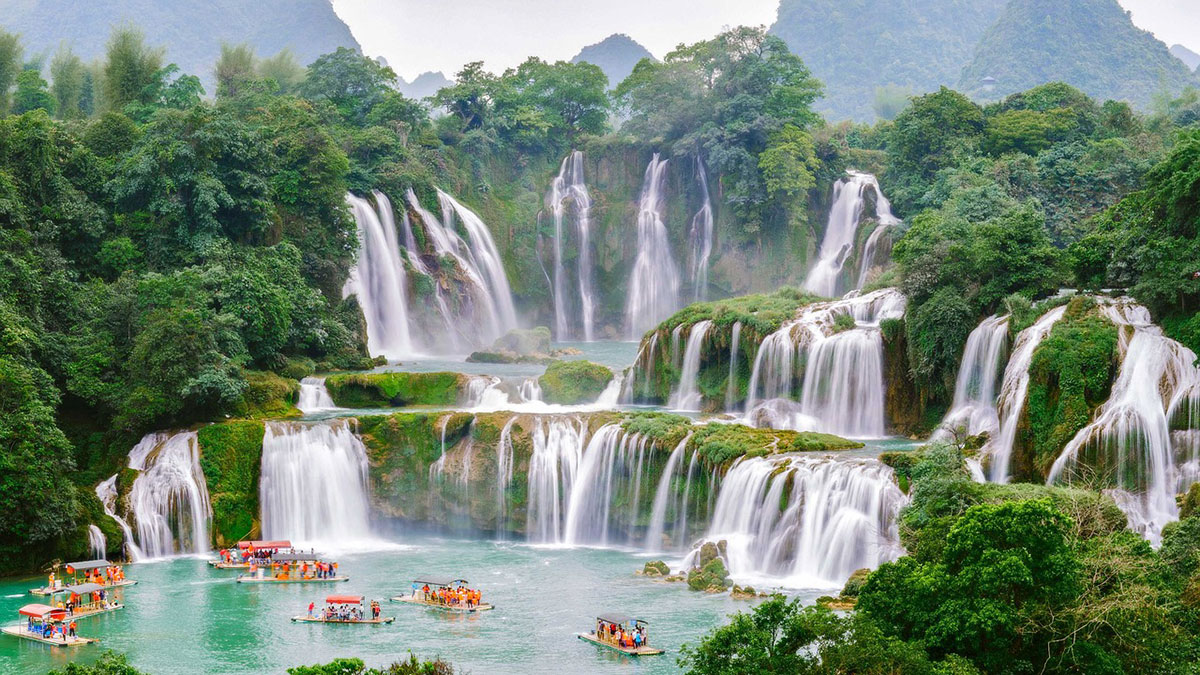 Motorists snake in between windswept karsts, speeding towards the Chinese border. Behind them is the small city of Cao Bang, capital of Vietnam’s Cao Bang Province and the backdrop for two fierce battles: one against the French, one on the Chinese. The bikers zoom toward an unofficial wonder of the world — the Ban Gioc Waterfall — enshrouded in mists and border controversy.

Cao Bang is the perfect destination for any Hanoian hoping to take a break from the capital’s 8 million population. With little more than 84,000 people, Cao Bang offers an amusing motorbike route in the thick of epic highland scenery. The city is only six hours north of Hanoi, with bus tickets available at the My Dinh Bus Station for 460,000 VND round-trip. Cao Bang’s location and accessibility make it a great choice for a weekend getaway.

The city is charming yet quiet. Being so late in the season, the nightlife is mostly reserved for tiny dance clubs or cramped bia hois. Pho Kim Dong, Cao Bang’s walking street, glitters with neon-rainbow lights and brightens the evening for happy families and travelers. Children and young lovers treat themselves to ice cream despite the quickly approaching winter chill. There are plenty of restaurants in the town’s center offering warm, hearty meals.

Chào stayed at the excellent Cao Bang Eco Homestay, sitting at the end of a quiet street. The homestay welcomes visitors with a cheery patio before you enter the large three-story home. The rooms and beds are surprisingly spacious for Southeast Asian accommodation, especially after a long day of bus travel. Breakfast, a family dinner and, most importantly, motorbike maintenance and rentals are all offered here. Semi-automatic motorbikes go for 150,000 VND per day, while automatics are 200,000.

The sandy shores are crowded with Asian families, smiling for selfies and gigantic group photographs. Vietnamese and Chinese tourists shuffle into tiny boats to feel the spray of the falls up close.

The journey to Ban Gioc is not challenging, allowing for even novice bikers to speed around the numerous mountains and rivers. Being in such a remote area, Cao Bang has very little traffic save for large 16-wheelers carrying timber and other products between China and Vietnam. The route is well marked and goes through several tiny villages — perfect places to stop for lunch or get directions. The entire route is a four-to-six hour round trip. For travelers arriving in Cao Bang in the cooler months, a heavy jacket is a must.

During Chào’s autumn visit, the water tampered off into two separate waterfalls, the thác chính (main waterfall) and the thác phụ (subordinate waterfall), but the summer sees one giant, combined waterfall, a result of Cao Bang’s heavy rainy season.

The sandy shores are crowded with Asian families, smiling for selfies and gigantic group photographs. Vietnamese and Chinese tourists shuffle into tiny boats to feel the spray of the falls up close. Delighted cries of “Oi Chua oi!” and “O, wo de shangdi!” echo across the cliffs. Ban Gioc Waterfall stood as a point of contention between the two countries for years. During the brief Sino-Vietnamese War of 1979, a misplaced border marker cast the ownership of the falls into question. While Vietnam claims the entirety of the Ban Gioc Waterfall, the current border agreement has the two countries splitting the falls, giving it two separate names (Ban Gioc by the Vietnamese, Detian by the Chinese).

Before heading back to our homestay, Chào stopped at the Phat Tich Truc Lam Ban Gioc Pagoda. As the perfect overlook, visitors to the pagoda can witness the true vastness of Ban Gioc. Standing at a width of 656 feet, the water falls over three massive drops before pouring into the Quay Son River. The cool, green river cuts through dense jungle, separating two ancient, often sparring countries.

On both shores of the river, tiny ant-like figures stand before endless, tumbling gallons of water. From such a high peak, the tourists appear as one collected tribe. Their nationalities undefinable, their languages muted by the roar of Ban Gioc. When surrounded by the natural beauty of a tremendous waterfall, concerns of border disputes briefly wash away.

A statue of Lady Avalokiteśvara, an embodiment of Buddhist compassion, bids Chào a silent farewell. Her pale eyes watch over us as we zig-zag towards the horizon. Sunlight finally breaks through the wintry overcast, granting the northern province a final hour of light. A cold sunset glints between the karst mountains before ultimately setting, covering Vietnam and China in a peaceful night.