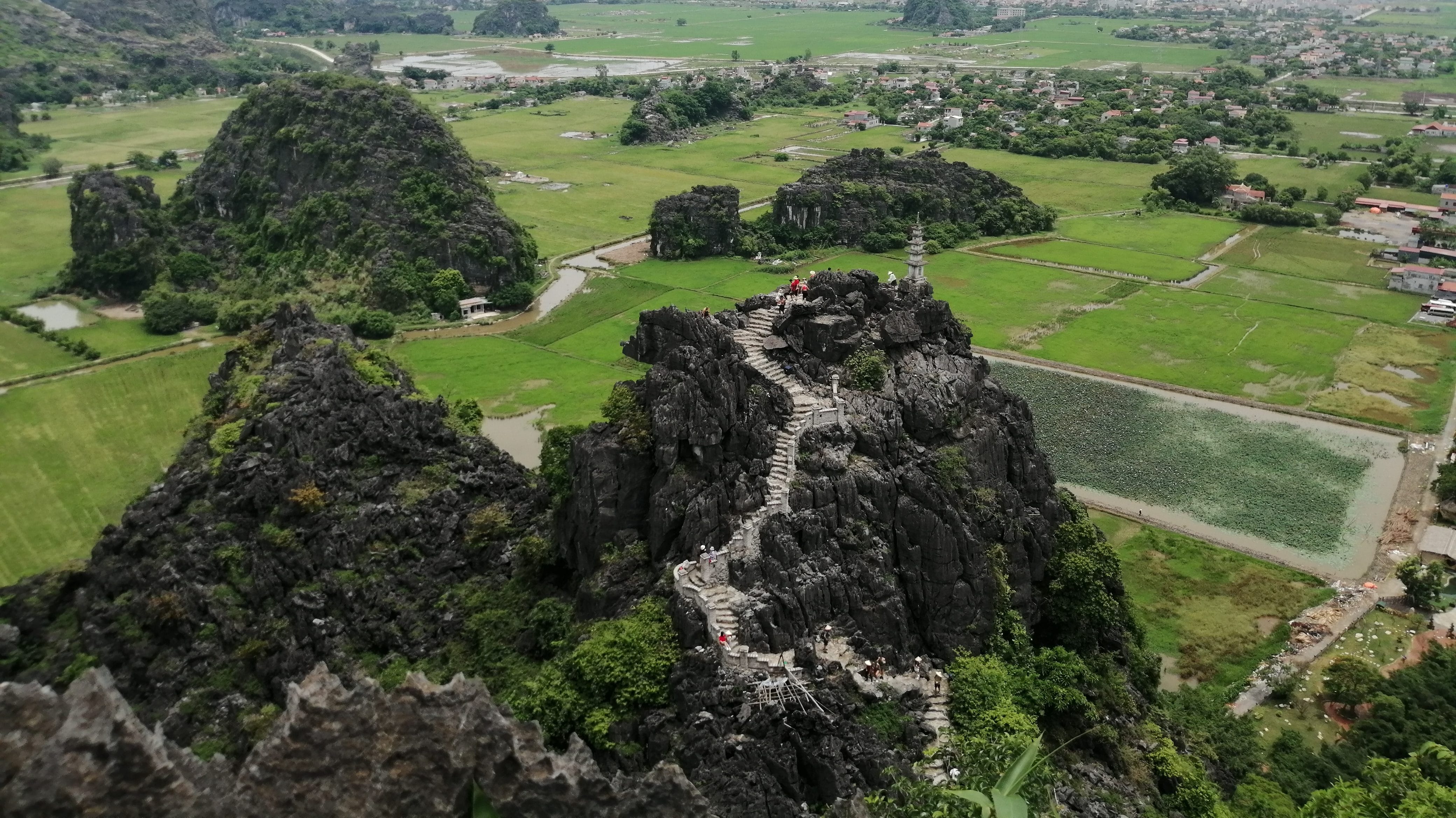 While Hanoi’s charms are seemingly endless, sometimes all you want to do is get away from it all and recharge under clear blue skies. For such a trip, the small sleepy town of Tam Coc in Ninh Binh Province provides the perfect country retreat.  Only 100 km south of Hanoi, the whole area is a blur of tropical green, ancient architecture, stunning national parks, prehistoric caves and fairytale pagodas.

Small enough that you can see most of what is on offer in just a few days, the old cliché about time seeming to stand still is truer of the areas surrounding Tam Coc than almost anywhere in Vietnam- with goats curiously roaming country roads and gigantic bright butterflies flitting across endless emerald rice fields. There’s a host of beautiful, rustic homestays to sleep, and it is all just over a two hour journey from the capital. Those short of time can easily come for a day trip.

The highlight of Chào’s trip was a boat tour among the Trang An Caves, a relaxing journey through crystal clear streams flowing under and around majestic limestone mountains. This Unesco World Heritage Site is also comprised of a series of temples progressively revealed, as small skillfully piloted boats emerge from natural caves carved below the mountains. This mystical touch adds to the natural beauty and mystic atmosphere. The United Nations are not the only ones to recognize the unique character of Trang An; it also provided the surreal backdrop for 2017 King Kong movie “Skull Island.” Now that’s two solid seals of approval.

“The pagoda is set against a deep cave where you can hide out in the cool if things get too hot. Look up at the cave ceiling to see a colony of bats literally hanging out. “

Depending on time spent at the temples, the tour should last up to three hours. Be sure to bring appropriate clothing for the weather, some water, and a hat or umbrella, which you will be thankful for come rain or shine.

Bich Dong Pagoda is one of the sites closest to Tam Coc , a 15 minute walk from the center of the town, so ideal for those who fancy a quiet morning without travelling too far afield. The pagoda is set against a deep cave where you can hide out in the cool if things get too hot. Look up at the cave ceiling to see a colony of bats literally hanging out. The pagoda itself is an early 18th century marvel set over three tiers, requiring you to amble across the river on a stone footbridge to enter.

A 20 minute motorbike ride from Tam Coc lies the ancient citadel of Hoa Lu, the northern Vietnamese capital of the 10th and 11th centuries. It is no longer a city but its remaining vestiges are superbly preserved, with an hour or two enough to navigate the elegant oriental charm of its temples, tranquil fish ponds and gently crumbling city walls.

For those with a little more time on their hands, the 2 hour trip out to Coc Phuong National Park is well worth the effort. The really keen can stay overnight in a shepherd’s hut and explore the park over 2 days. This lush national park (entrance 100,000 VND) features a sanctuary for rescued endangered monkeys. There are over a dozen species of ever-curious primates here, including langurs and gibbons, many the only of their kind having ever been born in captivity. Arrive in the morning for the best chance to hear their ritual singing, which sounds more like a gaggle of fire engines than playful chatter.

Those who prefer their wildlife semi-aquatic can check out the park’s wonderful turtle center, with many of the world’s most endangered turtle species residing here. But the park’s best moments are not necessarily any of the listed ‘attractions’ but just gently strolling between the ancient trees and trying to quietly catch glimpses of animals in the wild, or looking at strange giant leaves, which suddenly turn to butterflies and flutter off deep into the rainforest.

For those who do not have the time to travel too far afield from Hanoi, dreamy Tam Coc is just near enough to the capital to not get too travel weary, and can be done in anywhere between one and four days depending how much of the beautiful surroundings you wish to see. Chào found two days just fine.

Getting there:
Tam Coc is a 6 km taxi ride (expect to pay around 60,000 VND) from Ninh Binh train station, and getting there from Hanoi is simple. There is a train departing Hanoi station several times each day (for day trippers, we recommend starting early and catching the 6 a.m. train.) Alternatively, there is a regular bus. Both journeys take about 2 and a half hours and cost 150,000 VND.

[Video] Hanoi from dusk till dawn