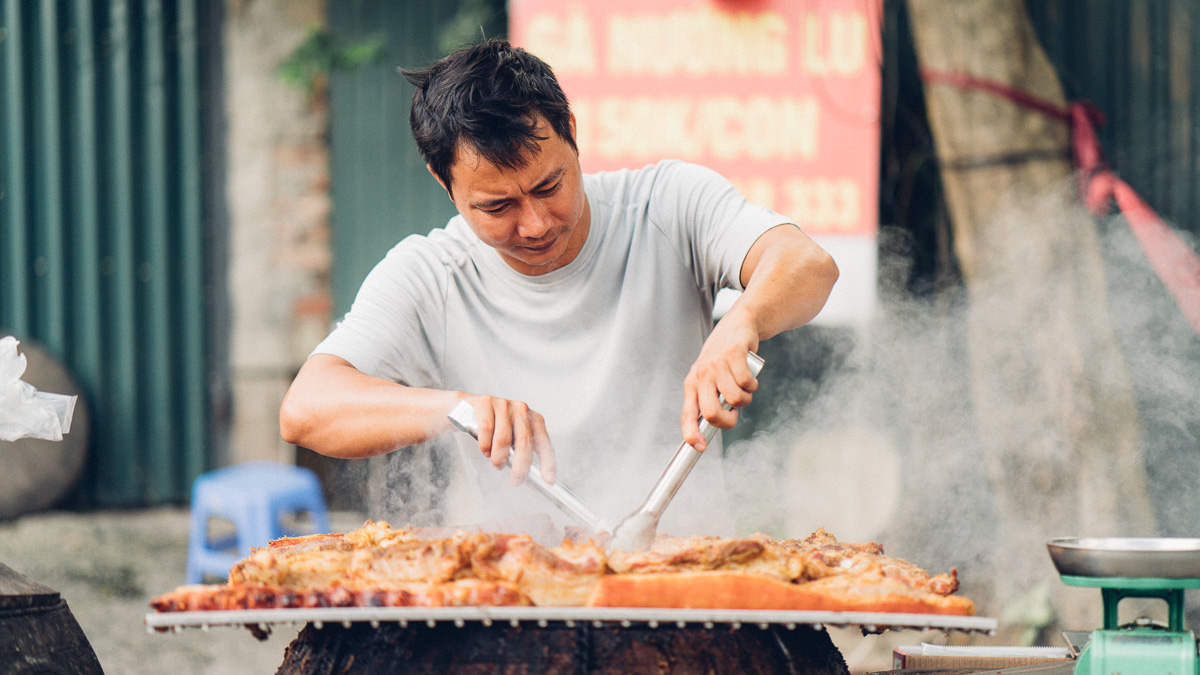 You can smell the crispy pork from what seems like a mile off. He’s like a local sending smoke signals to distant diners telling them dinner is ready. And without wrangling Chao’s team heads over to the start of To Ngoc Van street to pick up some barbecued pork belly from local vendor Dinh Van Bay. It is not difficult to notice him from far across the street: youthful, handsome, wearing his usual grey t-shirt, smoke from his grill billows around him, like some shaman in the midst of a ceremony. He recognizes us immediately and gives a cheeky grin.

Despite turning up to his local pitch with vast slabs of pork that look enough to feed a Mongol army, Bay often sells out in well-under an hour. It is with this in mind that we come early and taken first spot in the queue.  We eagerly await our meal. The way he cooks his food is labor intensive, and we watch his swift hands switching the pork, flipping over the different hunks of meat, his gaze clearly focused. Despite drops of sweat forming on his brow, there is not a single moment where his smile leaves his face.

It is clear to all who have met Bay that this is a man who genuinely loves cooking and is proud of his craft. There’s still 20 minutes to go before the pork is ready, but two more people have arrived to join queue, including what we initially assumed was a grumpy middle aged man. It turns out he was just eager to feed his belly. “I have always said that there are only two places you can find the truest Hanoi barbequed pork, one is in Hang Buom and the other is this place,” he tells us.

“Hey Bay, I can smell your smoke from my house across the lake!” shouts an old friend and customer, laughing.

It is not a surprise to see people coming back again and again. Most of Bay’s customer’s seem to be regulars. Despite the distinctly Vietnamese flavor, his barbecue is loved by people of all backgrounds, as witnessed by the swathes of locals and expats who can be seen queuing up at the barbeque stand on any given day. Upon first tasting, the meat is succulent, juicy and sweet, with a marbling in the meat and the fat oozing out in rich flavors. The skin, on the opposite end, makes a scrumptious crunch that’s a treat to the ear on every bite. It has an addictive quality, with Bay’s marinade keeping the flavor profile grounded, with it all given a tang with his homemade spicy garlic soy sauce—a divine combination.

Bay’s “stove” is a curious one: placed side-by-side on a portable cart are two giant ceramic pots the size and shape of old-school wine casks. “They’re just Vietnamese barrels that were used to ferment wine in the old days,” Bay tells us. “This cooking method makes my roasted pork stand out from others.”. Indeed, aside from the charcoal bringing out a darker, smokier flavor to the meat, the open fire is quite the sight. It is clear Bay knows what he is doing as the pork sizzles a way, the smoke-show is part of whole attention-grabbing drawing scene to draw customers in, and it works.

“Hey Bay, I can smell your smoke from my house across the lake!” shouts an old friend and customer, laughing.
“Well, it’s one way to advertise, isn’t it?” Bay chimes back.

Aside from his exquisite pork (it really does have to be tried), it’s clear people come back to Bay because they find him amiable and charming, and he chats away to people like old friends with whom he holds no secrets. So, we take advantage and ask him about his recipe. “It is actually the seasonings that make the meat stand out. I usually opt for traditional ingredients like galangal, lemongrass and satay sauce from the south.”

Bay is no strange face to the area. He has been here for two years and quickly befriended the other chefs in surrounding eateries. His ease at small-talk is second to none, and can probably be put down to being born in a large family of seven siblings. He is the youngest of them all, and thus named Bay, number seven in Vietnamese.

“Luckily for me, it does not take much time to marinate the meat so I usually wake up early to do the prep before going to work.”

Though he just sells pork now, until recently his brother would work with him and they would sling a variety of barbecued pork, chicken and duck. But when his nephew became sick, they had to slim down operations. “Pork has always been my strength, but selling it only allows me to take care of the bare essentials. I plan on getting back to the other stuff soon.”

Like any food stall, his business has its ups and downs, often resting entirely in the hands of the weather gods. “Hot days are tough, they wear you down quickly,” he says. “Rainy days aren’t too bad; it is when the strong wind comes along that we have a problem. At that point, it’s just a matter of grabbing-and-running before the storm gets you!” The coronavirus and rising pork prices were also a challenge for his business. “I had to take a break, and even raised my price temporarily. But I soon stopped because I didn’t want to lose my loyal customers.”

Aside from being the barbecue pork guy, Bay also teaches taekwondo and swimming on the side. “It is the summer season so I have been focused on teaching children to swim and martial arts in the mornings. Luckily for me, it does not take much time to marinate the meat so I usually wake up early to do the prep before going to work.”

Despite the exhausting work, Bay also takes on the title of head chef in his own household. “I always take on the cooking when I am at home, as my wife does not like cooking,” he says, with mischief in his eyes. “Well she cooks too but I cannot eat it, so I just tell her I will do it instead!”

By now it is getting late and the Hanoi sky is turning a lovely shade off pink, the sun no longer holding same glaring heat of the late afternoon when we arrived. We take our gigantic portions of pork and head home to eat them, as recommended, with some rice noodles, lettuce, and an array of fresh herbs. Bay tells us, he does delivery, but truth be told it is best to come here, have a taste test and pick the piece of pork you think looks best, not to mention have a conversation with the man himself.