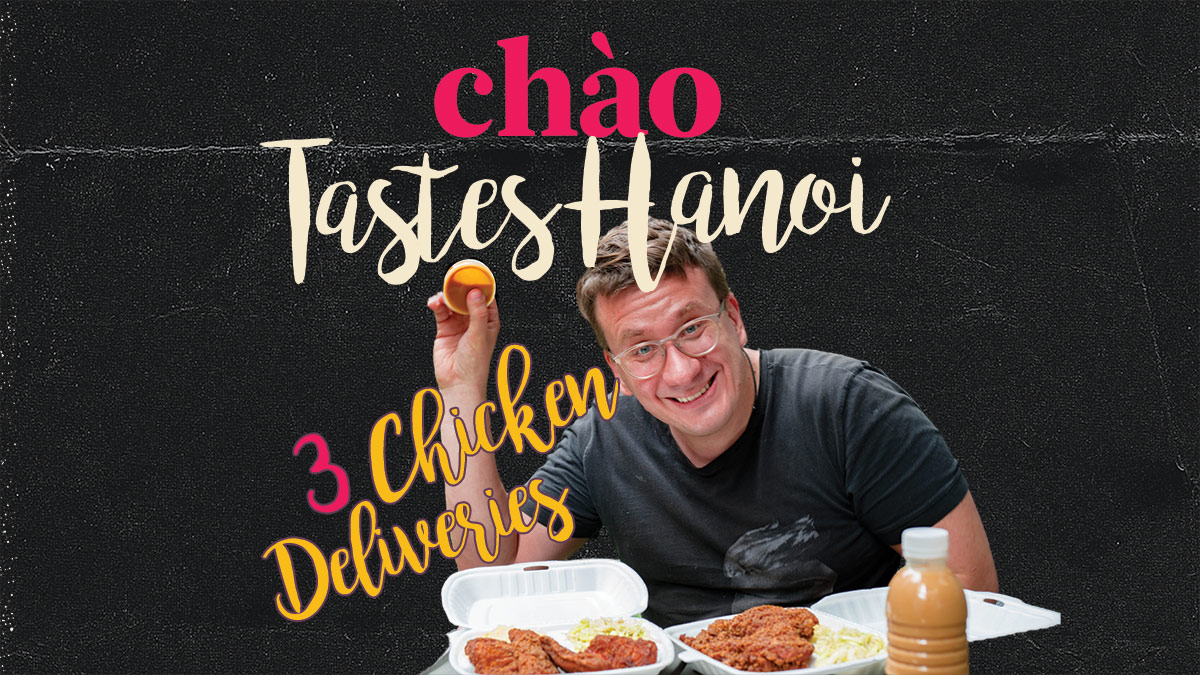 There are few comfort foods quite like perfectly cooked chicken: its thighs, its breasts, gnawing succulent meat straight off the bone, licking perfectly crisp skin out from between the teeth. Jerked, curried, roasted, fried, barbequed, smoked, stewed in red wine, or fresh from a piping hot bowl of pho, the humble chicken rarely fails to hit home.

There are numerous places to get it in all its myriad forms throughout Hanoi, perhaps most famously from the city’s very own BBQ Chicken Street, but for now at least going out to restaurants is off the menu, so where can you still get your delectable chicken fix?

Fortunately, there are several places in the capital that are diligently specializing in delivering this wondrous bird, served in supremely flavorful ways. The city’s finest chicken delivery options that go above and beyond what you are likely to get from KFC.

Chào recently tried three of the city’s very best options so you don’t have to, but we rather expect you will.

Of all the birds we ordered, Shay’s was the one that most resembled what you might call traditional fried chicken, albeit a very aristocratic version. By his own admission, proprietor Shay Lubin simply takes off the back quarter of a chicken, rips out the bones, marinades the flesh in yoghurt for 24 hours and then double fries the meat. We were not disappointed. The chicken is juicy and comes with a thick crust that cracks slightly on the bite, and is perfect when generously slathered in Shay’s own onion ketchup, and carrot gravy.

The chicken is served up with mash potatoes, which have not been mashed to a watery cream, but instead have a firm texture, and you can feel yourself biting into small nuggets of potato as you bite through. There is even a juicy coleslaw, which is divine.

Lubin says he was inspired to start the chicken hut as that while you could find any number of options for, say, burgers or tacos in Hanoi, when it came to fried chicken there were not many options other than KFC or Korean style. And he certainly puts love into his chicken. “I want my chicken to taste good without being precious!” he says.

Pairs with: Try it with Shay’s homemade Dulce de leche liquor, milk caramelized and blended with vodka and a touch of sea salt, served with ice.  It even makes a substitute for regular milk in your morning coffee. 200,000 VND / 350ml

Hanoi Cider Co. are, of course, most famous for their craft ciders. But if they are not careful they will soon be usurping it with their chicken such as its quality, which taste-wise strikes us as upmarket Nandos. For Chào, the stand out aspect of this set was its smoky chargrilled favor. This moist offering, marinated in mango cider, tasted like the chicken had brought the barbeque with it. Guy Dickson takes the sourcing of the chicken seriously: “The quality of chicken was our biggest concern. We tried chicken from local suppliers, markets, supermarkets but found the quality not good enough. Therefore, we found a farm near my wife Hao’s hometown that supplied corn-fed chickens. These chickens were much better, better taste, and better texture.”

Unlike Nando’s, the sauces here are more adventurous, offering a range of different sauces. Our favorite is the harissa with its peppery kick but there are also options of lemon and herb, piri-piri, jalapeno and coriander.

The fries were hot and crispy, as they should be, but other options include an excellent sourdough flatbread, grilled corn, vegetable kebab or red rice or crunchy garden salad.

Pairs with: Try it with their new, and seasonal, Mulberry Cider.

Tay Ho Jerk Chicken is undeniably the closest to what grandma used to make, if your Grandma is a killer cook from Jamaica. Of our three vendors, this one is the newest chef on the block as they have only been slinging chicken since April 1, but are already winning rave customer reviews.

Jerk chicken is a Jamaican dish usually using a mixture of Scotch bonnet peppers, allspice, cloves, cinnamon scallions, brown sugar and ginger, though one-man band Brian McDonald says he has to improvise slightly in Hanoi, including using Vietnamese chillis, but his years living in the Caribbean on the island of St. Thomas make this one authentically flavored, and it is served alongside some excellent grilled vegetables, and a classic rice and beans accompaniment. He says that: “Our special mix of spices and sauce creates an awesome marinade. “

McDonald told Chào, “We marinate our Jerk chicken from 12-48 hours minimum before we grill it up.  The chicken is super juicy, slightly spicy and full of amazing flavor,” and we can’t disagree.

Pairs with: Check out McDonald’s superb rum-based painkiller cocktail made with homemade coco lopez and sprinkled with nutmeg, a recipe from the Virgin Islands. 100,000 VND

The options here are markedly different, so this will very much depend on your mood; those fancying something sticky and spicy would be minded to hit up Tay Ho Jerk Chicken for their home-style Caribbean meal. Those fed up of KFC but wanting themselves some turbo-charged fried chicken slathered in gravy should give Shay’s a bash. If you want a tastier version of Nandos with corn-fed chickens, washed down with ice-cold cider, then Hanoi Cider House are your people. Why not go nuts, have a chicken party and order all three! Whatever your order, Chào is all but certain these are three of the best chicken delivery options on offer in Hanoi right now. Recommended.

From comfort food classics to the more obscure, “What to order” taste tests some of the best food delivery options in Hanoi.

[What to order] Hanoi’s best burgers