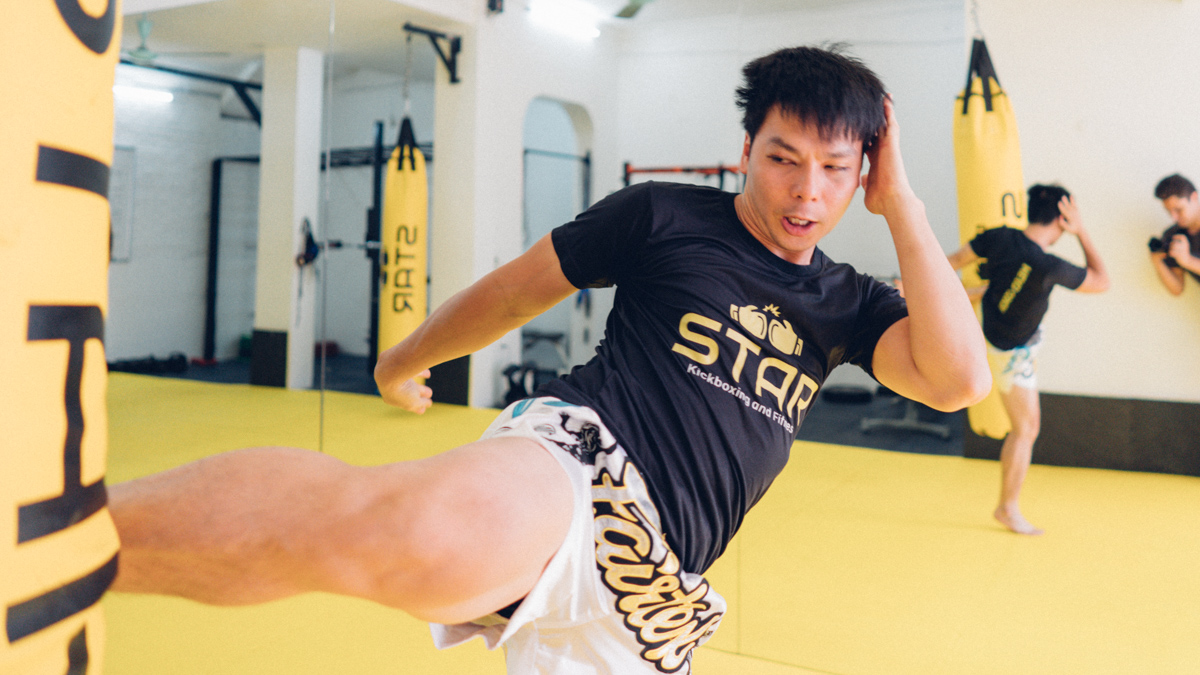 Conjuring up images of muscled men screaming orders and faceless receptionists gouging you in an endless upsell, fitness centers, gyms and person training facilities can be a scary place for the uninitiated. So, it was with a welcome sigh-of-relief that Chào was able to sit down with Star Kickboxing and Fitness, a bright newly-opened facility in Tay Ho with an easy going, but focused approach to health and happiness that quickly put all our fears to rest.

Arriving at Star Kickboxing with its poppy graffiti, large Bart Simpson Muay Thai mural, and bright yellow flooring and punch bags, it’s clear we are not visiting a corporate chain. Star is the brainchild of partners Gemma Dunne and Head Coach Mai Ngoc Phu. The couple met and fell for each other in Vietnam, over a mixture of kickboxing lessons, language practice and bun cha lunches–three years later, they find themselves the owners of their very own training facility.

It is probably the fact that the founders are a couple first, and business partners second, which gives Star its laidback, friendly vibes. The center feels more like a labor of love than something dreamed up by money men in gray suits.

“I guess it is because we are small,” says Gemma, a 30-year-old former project manager from southern England. “It means we know everyone personally and there is a family feel here. We can talk about exactly what people want and need. We know everybody who comes here’s story, we know why they are in Vietnam, and what they want.”

Though Phu, from Nam Dinh Province, is now an accomplished Muay Thai trainer, his first foray into combat arts was as a teenager at university where he practiced Nhat Nam, an ancient martial art sometimes referred to as Vietnamese Kung Fu. It was his skills here that led him to serving as part of the security team to a series of top Vietnamese leaders as well as visiting senior dignitaries. He has helped guard the Vietnamese president and was even part of the security detail outside the bun cha restaurant when then President Obama sat down to eat with the late food-writer Anthony Bourdain in Hanoi in 2016.

Telling the story, Phu mainly focuses on how polite Obama was, almost seeming shocked at the president’s humility. “He had his own security inside the restaurant, we had to keep the outside secure,” he says. “He was very friendly. He would make time to say hi to everyone and treat them well whoever it was, security or whoever. Very polite. He respected everyone.”

Despite having trained in some in form of hand-to-hand combat his entire adult life, at first glance Phu does not look or sound like a badass kickboxing machine. He is humble, softly spoken and not particularly tall. While his body is well defined, it is not ripped with bulging muscle. It almost as a surprize when you see another trainer at Star taking him through his paces. A flurry of fierce shin kicks, speedy jabs and elbow punches sends Phu’s sparring partner back. Chào hopes our introductory lesson does not see us on the end of a similar hiding. Fortunately, it does not.

Over an hour Phu goes easy on Chào‘s middle-aged and deeply unfit editor, as he takes a first ever boxing lesson, taking time to correct his stance and posture whenever it gets bent out of shape, which is often. Some trainers fall to the temptation of taking their charges through things too quickly, giving them a false sense of achievement. This can seem fun in the short term, but it leads to bad habits and poor technique.

“It takes time for people to pick up your strengths and weaknesses. With Phu it was different, he did what I needed from the start.”

Phu is incredibly methodical, and rather that shout instructions, he prefers to physically come in and subtly adjust your body position so it is exactly right, and he will keep coming back in to fix it rather than rushing forward through the session. He is a gentle teacher, but focused and precise. It always feels like he is paying attention to actually teaching, and not just going through the motions.

John Nesbitt, 56, looks like a pirate and having worked in physical fitness his whole life, is as fit as a man half his age. He has been training with Phu since November, before Star even opened (late Feb 2020). Nesbitt has tried several fitness centers since he has been in Vietnam but was never quite satisfied until he started training with Phu.

“When I have been at other gyms in the past, they are giving me different trainers all the time. There’s no consistency. It doesn’t make for good training. It takes time for people to pick up your strengths and weaknesses. With Phu it was different, he did what I needed from the start,” Nesbitt says.

“I am reasonably fit for my age, so I told Phu that I didn’t want to waste the first 20 minutes of my session doing press-ups and running up and down. I can do that on my own for free. I pay him to give me expertize and skill technique-wise. He listened and so far I have been enjoying myself.”

“Training one-on-one with Phu is totally different. I come three or four times a week. Phu could tell you better than I can, but I feel I have come on leaps and bounds. Before I couldn’t punch or anything. This is the third gym I tried. The first one was ok, but it just didn’t meet my expectations. But when it is just me and Phu, I know every single second in a session counts.”

Working for other gyms in the past, Phu always knew it was his dream to work for himself and to train on his own terms, but when asked if he would have started the center on his own, he pauses for a slight second, before laughing and looking across to Gemma. “Maybe I needed someone to push me,” he says with a smile.

“We can see the difference in people. They develop a bit of a glow, and you can see them come in a bit happier, a bit changed.”

Gemma is first to say that she gave him a nudge in the right direction. “Yeah, that’s definitely where I came in I encouraged him. I saw, as his customer and partner, just how hard he was working,” she says. “I used to say to him, ‘you should do this for yourself. Your customers, they don’t train with you because of where you are but because of who you are.’”

“Phu basically just wants to train. It can be hard to get him sit down and do all the business stuff. He would be happy to teach and train 50 hours a week, that is his dream. Whereas for me the business stuff is fine, I can handle a lot and that gives him confidence to do his thing.”

Though a new venture, Star do as much as they can in terms of community outreach. They are currently designing a program to be taught in some of the local schools, and twice a month, women from the social enterprise HopeBox come in for self-defense classes.

HopeBox focus on giving employment and helping women who have suffered from gender-based violence, with many of the women suffering long-term psychological trauma. Phu’s classes go some way to helping them rebuild their confidence.

“We want to help these women who have been in a very bad situation, and they can be quite scared, so we help them feel more confident and learn self-defense,” Phu says. “I don’t know, in the past a lot of these women were very poor, and I was too, so I feel I can understand them in some way. They get a lot from the classes. I hope so, anyway.”

A key highlight of Star is that they are so in tune with the fact that people come in to train for very different reasons.  For some it is about losing weight, for others it is a mental health boost or added self-confidence, and, specializing in Muay Thai and kickboxing, they get a lots of people that come in because they just want to become great fighters!

“People always think about the physical side, but there is so much more. A lot of people got quite depressed with the virus and maybe not having work, and so started coming here every day and for them it was more of a mental health thing,” Gemma says. “To have somewhere and a reason to come somewhere, to have a reason to get out and do things means so much. And we can see the difference in people, they develop a bit of a glow and you can see them come in a bit happier and a bit changed. It completely changes the way people see themselves, and they look better.”

For those perhaps not quite sure if Muay Thai or kickboxing is for them, Star are more than happy to sit down and have a friendly chat, not to mention to give a free trial with no obligation to sign up.  Such a visit might just be the beginning of a healthier body and mind.

Chào Hanoi readers can currently sign up for a 3-month package at Star at a 25% discounted rate of 4 million VND, including 10 personal training sessions and unlimited private gym access.