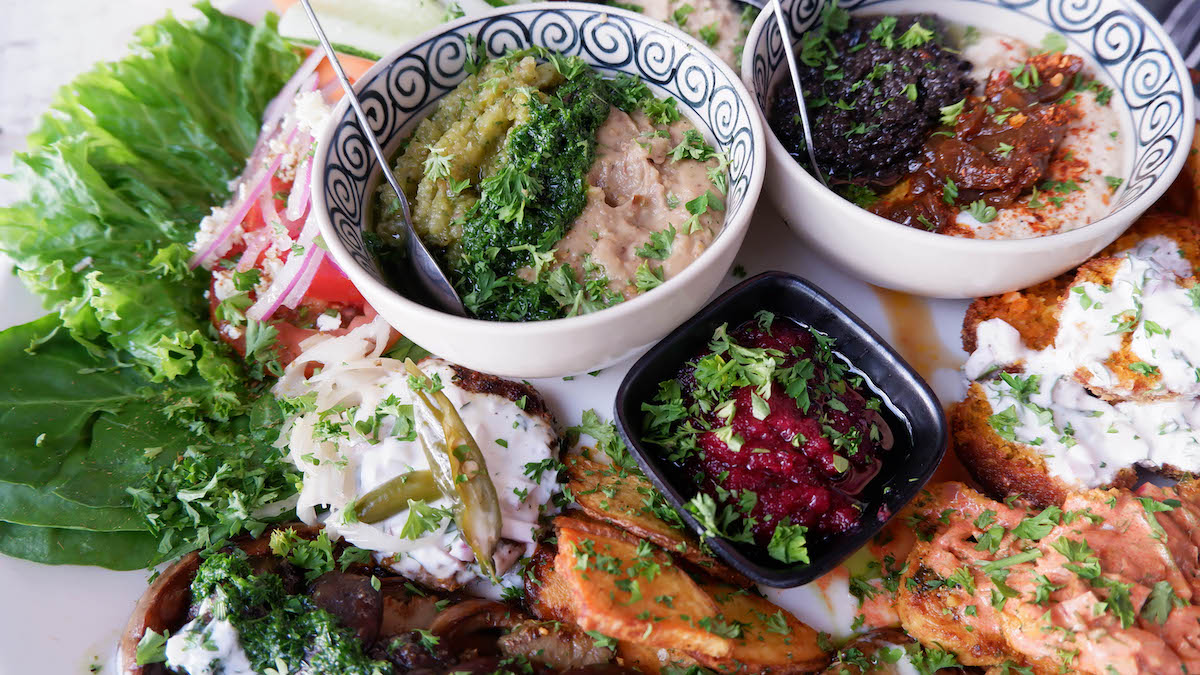 Ascending the stairs of this new restaurant with a beautiful lakeside view, Chào is met with a distinctive herby scent infused in the air. It is alluring from the get go and full of mouthwatering promise. “Smells good, eh? That’s the thing with Mediterranean food,” says Head Chef Thomas Etievant, who co-founded the restaurant with Italian Marco Yanes who hails from Milan. He’s not wrong.

Those who’ve been to Greece have probably heard Kalimera uttered between people in lieu of a hello. Derived from Kali, meaning good, enjoy, beautiful. It is these simple and core values that this new restaurant wishes to deliver, wrapped in the beautiful culinary fusion of countries and regions touching the Mediterranean Sea: the Middle East, Greece and the South of France.

Kali rejects the much-perpetuated idea that healthy goes hand in hand with bland and boring. With a visual explosion of colors and herby abundance flavors, the platter here puts the fun back in food. Finding good food is Hanoi is all too easy, with an abundance of options presented in every nook and cranny of the city, but when was the last time you found yourselves surprised at the flavors of a bowl of bun bo hue, or your go-to cheeseburgers in town? As satisfying as these comfort foods are, we all pine for something a little different.

The flavors and vibes at Kali are perhaps best described as bold without being pretentious. This is not so much a place to stop by for a quick afternoon snack on the go, but designed for long conversations with trusted friends, built upon hearty ingredients and funky spices. Chào orders the best-seller “The Traditional Dish,” which is a delightful combination of pretty much everything on the menu. In signature mezze fashion, the spread takes the spotlight, with six (yes, six!) distinct options assembled center-stage: Black olives tapenade; grilled and skinned green bell pepper dipping sauce, which may come off as slightly bitter to some; roasted beetroot puree; a classic sesame with olive oil; hummus with caramelized onion, drizzled in honey; and baba ganoush, (eggplants blended with garlic and lemons). The last two are undeniably our favorites. These are all eaten with a choice of either vegetable sticks, French fries or pita bread served alongside.

The dish also includes some tasty falafel with white sauce, grilled eggplants and mushrooms, and for protein, chicken shawarma with paprika yoghurt (a Lebanon-native food), and some sublime juicy Kefta beef. At just 300,000 VND, it’s big enough for three (or two very hungry) friends to share. “Even if your food is good, if it’s a little bit too expensive, people won’t come,” Etievant says of the pricing.

Against the backdrop of the largest body of water in Hanoi, the West Lake, this is probably as close to an authentic Mediterranean experience as you are going get in the nation’s capital.

Seeing such a wide variety of food and flavors at first sight might leave some in fear of ending up amid a hotchpotch of disaster. However, everything manages to somehow melt perfectly together. It never feels too fattening; although Mediterranean fare is known for its generous use of olive oil, it’s also focused on wholesome ingredients like beans, nuts and almost zero processed food. By the end of the meal, you’re left feeling full but not sick with grease.

Against the backdrop of the largest body of water in Hanoi, the West Lake, this is probably as close to an authentic Mediterranean experience as you are going get in the nation’s capital. It also has an open-terrace up top, overseeing a scenic horizon with fantastic views, and on Thursday evenings the restaurant hosts a series of after work events, usually live music in the open area, heightening the refreshing atmosphere.

Kali is well on its way to building a loyal customer base, despite opening just July this year, in the midst of lingering coronavirus fear. “Actually, the timing was perfect. With the last lockdown, entertainment and events were completely dead. When it was lifted, people had been stuck at home for months; they were eager to go out and boom, we opened this outdoor restaurant,” explains Etievant. “People still need to eat.”

Born and raised in France, he makes the food that he grew up on. After five years in Hanoi, he says he noticed a lack of cultural diversity in the restaurant scene. “In Paris, you don’t need to travel far, there’s a district for every cuisine: Indian, Italian, Vietnamese. Here, we don’t really see that. Moreover, as Hanoi’s hot and humid, I chose this style of food because it’s light, fresh, and easy to eat.”

The drinks are also sprinkled with Mediterranean influence. We order a Spritz, a light cocktail with Italian wine and apéritif, mixed with soda and fresh orange juice. For something with a stronger punch, try out their eponymous cocktail, the Kali.

Kali is undoubtedly best enjoyed during a long lazy late-afternoon as the sunset goes down over the glistening lake during this most beautiful season: a beautiful touch of the Mediterranean in the heart of Hanoi.

Time to Taco ‘Bout It