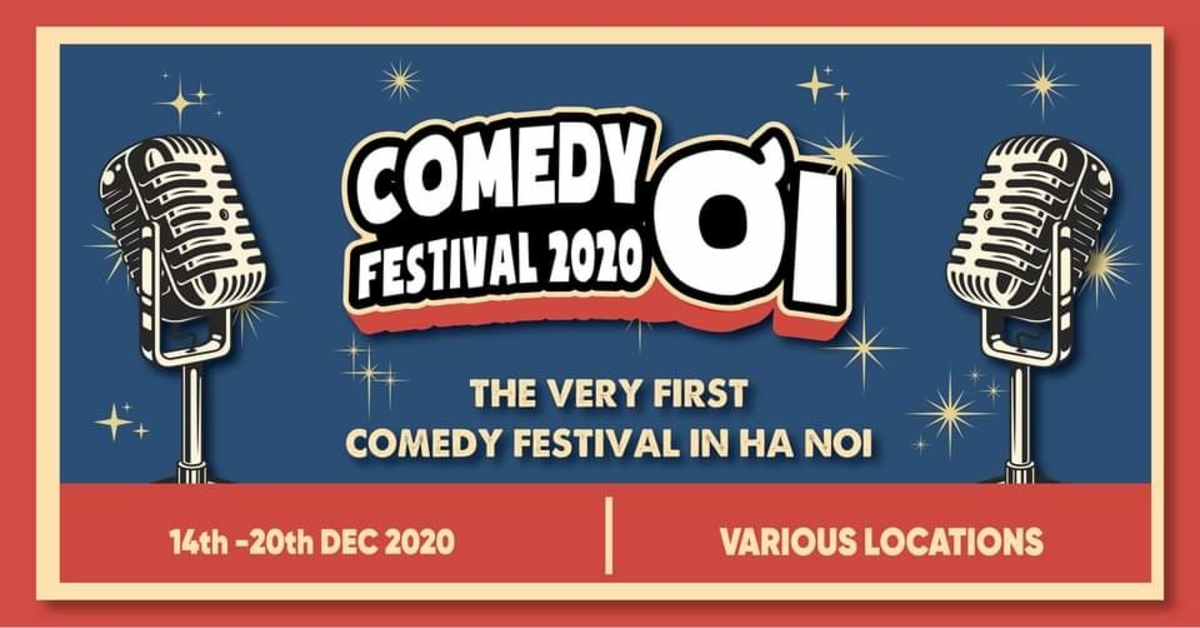 The Hanoi comedy scene has grown fast over the last few years but it has always been somewhat disparate: an improv group here, a stand-up show there, the occasional podcast. But now all that looks set to change with Comedy Oi!, a week-long comedy festival bringing the many different strands of the city’s, indeed the country’s, comedians together under one umbrella in several amazing locations.

The festival will see comedy events taking in everything from short films, stand-up, an interactive Monty Python film night, improv, a quiz, Vietnamese language shows and more, with comedians flying in from major cities throughout the country.

With 10 events and several workshops over just seven days, it will be the largest series of comedy events the capital has yet seen. Over hot toddies and cocktails at Ma Xo Café in the capital’s Truc Bach area, Chào hunkered down with event organizers and three leading lights of the city’s quirky comedy scene, who are putting the vast, ambitious project together: Kim Thanh Le, Bex Queren and Erick Garcia.

Before the booze even arrives, things take a strange turn– the cozy seating arrangements led to a debate on all of the group’s respective ass sizes, each comedian consecutively claiming to have a smaller ass than the other. “This is like the opposite of a Nicki Minaj song,” as Garcia put it. Things didn’t get much more highbrow after that. Well, maybe a tiny bit.

The festival is the brainchild of Thanh, a Hanoi gal who does improv with Haha Hanoi Comedy improv group (formerly Rotten Grapes) when she isn’t working on education projects for the Japanese government in her day job. “We have always had comedy improv shows every year, but they are usually for a day or two. They are small, and with the coronavirus and everything it has been tricky, so we wanted to do some fun stuff. Finish the year in style!” she says. “We were actually supposed to go to an improv festival in Singapore earlier this year, but that got cancelled so it is going to be great to do something here.”

“It is very hard because usually the first thought you have in comedy is often the right thought. But unfortunately when it comes out that can sound quite wrong,”

Comedy can be controversial at the best (or is that worst?) of times, particularly when you are performing to multi-cultural audiences. “It is very hard because usually the first thought you have in comedy is often the right thought. But unfortunately when it comes out that can sound quite wrong,” Queren says. “We had a scene at improv practice recently and I was playing a 16-year-old schoolgirl in a sex scene—saying I wasn’t sure what to do. Stuff like that. It was awkward. Some people thought it was too much. I should have probably upped my age a bit. For me, there’s a line. Obviously I am pro-consent. If things are said in jest, you can get away with a lot. If it is true, it is funny, but I couldn’t joke about Auschwitz, being half German in particular.”

Garcia is also thoughtful about what he does and doesn’t put into his sets, which often touch on identity, racism. There are certain routines he will not do in front of a Vietnamese audience as he does not always feel the cultural context is there for it to work. “When I first started comedy I was always like ‘as long as you can make if funny you can do it,’ but I think as I have grown older I have seen two comedians do the same raunchy joke, but I will laugh at one and not laugh the other,” he says. “And I think it is because one guy is very obviously a parody. The other guy really believes the shit he is saying. He did that. He truly believes it.”

“Sure it is very different performing in Vietnamese than English, but I still do toilet humor. I still do dick jokes—they work every time,”

Many in the Hanoi expat comedy circuit will admit they have sometimes not been as inclusive of the local community as they could have been—partly through not knowing the language, partly through not wishing to cause offence, and sometimes just from worrying about the humor being that little bit too political for the local authorities to see the funny side. But Comedy Oi! is making big leaps to address such issues through including shows exclusively in Vietnamese performed by Vietnamese.

Comedy Oi!’s lead designer Cuong Manh has been playing a key role to bring such comedy to the masses and will host a night of Vietnamese comedy–Hai doc thoai oi!– during the festival (Dec. 15th) at Qua Dat Tron coffeehouse, and is eagerly, perhaps a little anxiously, anticipating the occasion. “For me it all started when I went to a comedy club night on the Khaosan Road in Thailand many moons back. Then I just knew I wanted to do it,” he says. “Sure it is very different performing in Vietnamese than English, but I still do toilet humor. I still do dick jokes—they work every time. It’s gonna be 8-10 Vietnamese stand-ups doing 8-10 minute sets. I’m excited and nervous. It is my first time hosting a show. When people in Vietnam think of comedy they tend to think of movies or the internet, not about improv or stand-up, but it has all been growing the last five years.”

The organizers are all hyped up about the sheer range of venues helping out to put on the shows. From the legendary to the newer, they reel off like a setlist of the very best bars and cafes in the capital, including Standing Bar, Hanoi Rock City, The Hanoi Social Club, The Underground 88, Turtle Lake Brewing and Quat Dat Tron, all which in one way or the other have long been doing their bit to promote, not just comedy, but the arts in general throughout the city.

The comedy boogaloo opens with Muahahaha Movie Monday (Dec. 14)– an interactive showing of Monty Python and the Holy Grail, with the festival’s flagship Special Comedy Night being held on the penultimate night of the festival at  L’Espace Auditorium on Dec. 19, bringing together Vietnam’s best comedy improvisers and stand-up comics from Hanoi, Danang and Saigon.

Whether you are feeling bold and want to do a workshop and actually learn how to be a be a comedian, or you simply want to sit back and enjoy the laughs, Comedy Oi! has something planned for everyone and looks set to be the biggest, jolliest comedy mash-up the capital has ever seen, with seats aplenty for the biggest to very smallest of asses.

Chào Hanoi will be giving updates on specific events throughout the festival.

[Days gone by] Opium: How the ‘Brown Fairy’ swept across colonial Vietnam