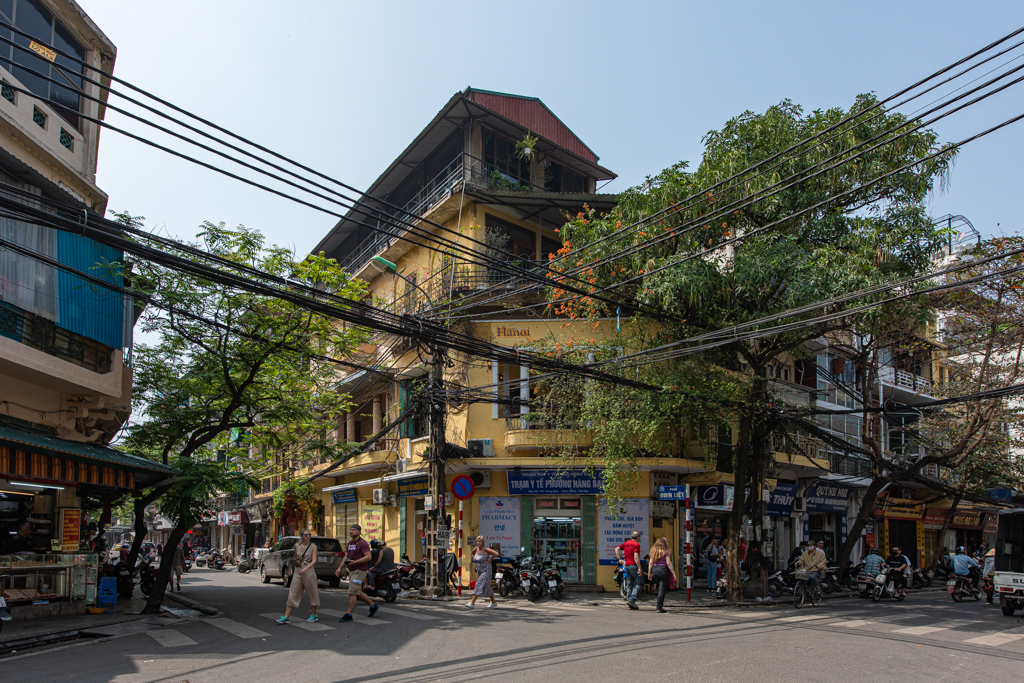 It’s Sunday afternoon and a blast of thunder detonates over the Hanoi Old Quarter, declaring the imminent arrival of an autumn shower. Specks of water fall like pin pricks as I squeeze through Trung Yen Alley, a narrow ribbon of road linking Hang Be Market with Dinh Liet Street.

Striding past bustling one-room restaurants emitting the enticing aromas of bun ca (rice noodles with fish) and mien ngan (glass noodles with goose), the sprinkles of rain quickly morph into a more persistent shower. Attempting to stay dry under a string of shop awnings, I race down the alley looking for more permanent shelter. Fortunately, it arrives at the end of the road.

The refuge is Bancong, a coffee shop and restaurant housed in a handsome Art Deco corner building. Through the ground-floor window, I spot cozy lighting and busy baristas promising sanctuary. I jump inside just as an intensified downpour plunges the Old Quarter into chaos.

Bancong (ban công in Vietnamese) comes from the French balcon, meaning “balcony,” three of which jut proudly from this establishment. In-keeping with Art Deco design fundamentals, each of these outdoor spaces embody clean-cut curves and crisp corners, while flowers and hanging pot plants bring some soul to the orderly aesthetic.

“We named the café after its best feature,” says co-owner Bien Nguyen, part of the team that restored the building, once a private home, and opened Bancong in June 2019. It had previously sat derelict for decades and without records of the house’s residential history or photographs of the way it originally appeared, the restoration project – including considerable repairs to the prized balconies – was a challenge.

“We consulted architectural experts, researched old documents, studied old photos of the Old Quarter and even reached out to elderly neighbors that remember what the house used to look like,” Nguyen says, dressed in crisp chinos and a fitted shirt that complement the dapper architecture.

Nguyen represents a young generation of Hanoians that value the city’s historic architecture and are at pains to see it threatened by Hanoi’s unprecedented urban development. To repurpose these disused buildings and save them from potential destruction, entrepreneurs like Nguyen are converting these heritage structures into businesses, such as cafés, restaurants and galleries.

Postmodern architecture receives little recognition in Vietnam, not only because it evokes memories of economic hardship, but also for its monolithic aesthetic.

Bancong’s balconies leave the greatest impression, but the interiors also offer quiet corners to sit back and tuck into Hanoi’s signature dishes, such as bun cha (rice noodles with grilled pork) and pho (beef or chicken noodle soup). Nguyen’s team didn’t remove any of the interior walls so each of the five small rooms across the three-floor establishment can only fit in a handful of tables. Despite having capacity for over a hundred, Bancong still feels intimate.

“This house was probably built in the early 1940s, when art deco styles inspired by shifts in European and American architecture were catching on in Hanoi,” says Truong Ngoc Lan, a history of architecture lecturer at Hanoi’s National University of Civil Engineering. Casually dressed and exuding the air of a scruffy academic, Truong speaks to me with gentle passion in one of Bancong’s first-floor rooms, probably what was once the master bedroom.

Bancong’s walls are a characteristic faded yellow, a color that won favor with the French during colonial times, and the team have kept as many period features as possible, such as the large porthole windows. “Though the style is clearly European, French people didn’t live in the Old Quarter during colonial times,” Truong says. “This house was likely built by a wealthy Vietnamese or Sino-Vietnamese official that was influenced by French culture.”

According to Truong, the house is unique because colonial mansions like this are usually only found in neighborhoods that were inhabited by the French. During colonial times, the Old Quarter was dominated by long and narrow shophouses built in the Sino-Vietnamese style, where local families used the front for commercial purposes and lived in the back. The Vietnamese traditionally built terraced shophouses packed in tight rows, whereas the French constructed large detached mansions for themselves. Bancong actually offers a little of both.

“Because of the building’s history, it’s kind of half house, half temple. We still welcome worshippers on the 1st and 15th days of the lunar month.”

Some traditional shophouse architecture still remains in the Old Quarter and, like Bancong, also lends itself to commercial purposes. On a parallel street I find Hanoia House selling expertly crafted lacquer products, such as kitchenware and jewelery. Hanoia House is their flagship shop.

“The house was built in the 17th Century,” says Dang Tran Quan, PR manager for Hanoia. He speaks English with a thick French accent, reflecting his studies in Europe, and he’s dressed in black in contrast to the bold primary colors employed in Hanoia’s products.

“The house was restored in 1852 before falling into disrepair and was completely rebuilt in 1941,” Dang says, adding that the purpose of the house shifted from a dinh (a traditional community house for worship and meetings) to shophouse. The house was then appropriated by the government after the war. The structure has remained more or less the same since, though it was restored in 2000 with funds gifted by the French city of Toulouse in recognition of its architectural significance. Hanoia rented the house from the city authorities soon after the restoration.

The long and narrow house is a series of three two-floor rooms divided by outdoor courtyards, and Hanoia have incorporated this remarkable floorplan into the presentation of their products. The three rooms are themed according to color or product depending on Hanoia’s shifting seasonal displays. On the day of my visit, the front room brandishes fiery reds and oranges, while the room behind it displays serene blues and greens.

“What makes this house really special is the shrine,” Dang says. “When the house was converted from a public dinh to a private shophouse, the place of worship remained but was moved to the raised floor of the front room. “Because of the building’s history, it’s kind of half house, half temple. We still welcome worshippers on the 1st and 15th days of the lunar month,” Dang, says referencing what are traditional days of worship in Vietnam.

While Bancong and Hanoia House have remained whole, other heritage buildings survive but have been divided up. Walking south I discover Loading T, a one-room café famous for its egg coffee, a Hanoi specialty. The large townhouse is an extraordinary example of classic French Indochinese architecture, with a grand imperial staircase and large, olive-green shutters. Loading T only occupies a small segment of the building.

The townhouse’s unusual circumstances reflect the city’s checkered history. It was constructed in 1931 by a wealthy Vietnamese lawyer during Hanoi’s architectural heyday, as evidenced by ostentatious features such as the staircase. After World War II, Vietnam’s self-declared independence and a seismic societal shift to a planned economy, the government appropriated the house and divided it up between 16 families. Nguyen Hong Trang’s parents were the recipients of one of these segments, and in 2015 she opened Loading T with her husband, Hoang Tuan Son, a keen architectural preservationist.

“I’m still trying to buy the whole house,” Hoang says. “The problem is money – it’s not easy doing business with 15 different owners. Some are happy to sell for a reasonable price, but others are asking for too much.” For Hoang, it’s all or nothing. He needs sole ownership to justify spending the capital to protect and restore the house’s unique features, such as the turquoise roof tiles. This is one of the last remaining houses in Hanoi to exhibit these rare and costly tiles, which the original owner imported from France. Virtually every other tiled colonial house in Vietnam sports red tiles, which were produced inside the country.

“If I can get my hands on the whole house, I’ll maintain the different segments and rent them to small creative businesses,” Hoang says, as his young daughter plays on his lap. “I’d love for the house to serve as a living museum, not just for the incredible architecture but also as a place that supports local artists and artisans.”

Hoang is not alone. The city’s art and culture proponents are keen to preserve the city’s architectural heritage. At the northern tip of the Old Quarter, I visit Manzi Exhibition Space, an art hub that opened in August 2019 on the ground floor of a postmodern terraced house. A French colonial house once occupied the plot, but the land was appropriated by the government in the 1950s and the building demolished in the 1980s. A state-owned chemical company built a four-floor office building in its stead.

During those years, Vietnamese architecture was heavily influenced by the Soviet Union, but after the fall of communism in 1989, Soviet postmodernism fell out of fashion. Meanwhile, the state-owned chemical company vacated the building and it lay forgotten for three decades.

“I was born during the Soviet period and it impacted my upbringing,” says Hanoi-born Tram Vu, founder of Manzi Exhibition Space. “These four-floor buildings were common during that time. My parents don’t want to remember this period of history, but for us kids it was different. I have fond memories of my childhood, and these are reflected in the building,” Vu recalls structures such as these going up in her neighborhood and wondering what the views were like from the upper floors.

Postmodern architecture receives little recognition in Vietnam, not only because it evokes memories of economic hardship, but also for its monolithic aesthetic. The façade at 2 Ngo Hang Bun is made of grey aggregate concrete, a coarse and austere finish, with large panels exhibiting unembellished geometric patterns.

“There are so many tasteless elements to it, such as the fake marble stairs,” laughs Vu, sporting bleached hair and large, round glasses. “But for me it’s still visually appealing. The rooftop is particularly special – perfect for film screenings.” The project is still relatively new, but Vu has ambitious plans for the building. She hopes to hold at least one monthly exhibition and film screening, as well as several music concerts, talks and seminars on the ground floor and on the rooftop.

“Opening businesses in heritage buildings is the right idea because it helps to keep them alive and builds appreciation in the general public,” Truong says, lamenting that Hanoi’s architectural history enjoys little legislative protection beyond the major sites such as the Hanoi Opera House and Temple of Literature. The buildings occupied by Bancong, Hanoia House, Loading T andor Manzi Exhibition Space could all be legally destroyed at any time.

Truong hopes that there will be stricter heritage preservation laws in the future, but while regulations remain insufficient, Hanoi’s discerning small business owners – and the patrons that frequent them – are offering the best chance of survival for these heritage buildings.

All photos by Khanh Vu Bao (except the two interior shots of Manzi, which were provided by the gallery).