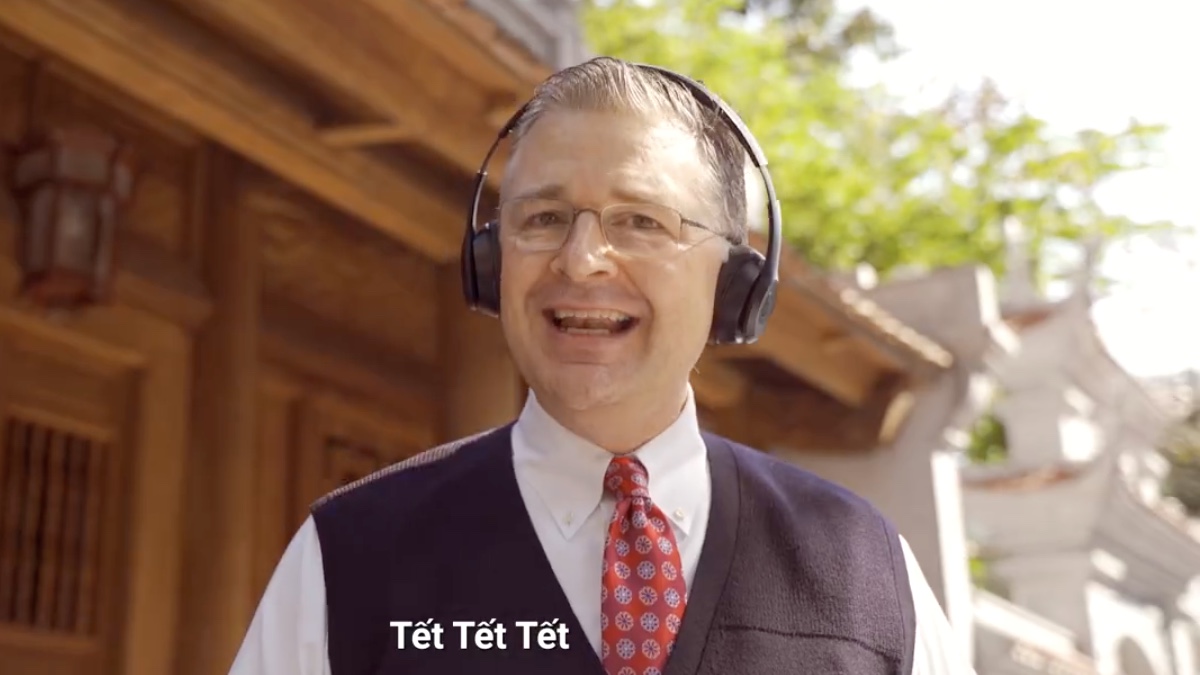 “I’m from Nebraska – I’m not a big city boy, then three years ago I moved to Hanoi”

It was just three weeks ago when outgoing U.S. ambassador Daniel Kritenbrink dropped a rap video in a, shall we say, unusual attempt to build U.S.-Vietnamese relations. It left many delighted and many aghast, but perhaps the biggest surprise was just how much this rap debut got the world talking. From domestic outlets such as the Hanoi Times and Da Nang Today, right through to major international news institutions such CNN, the Washington Post and the Guardian, the diplomatic move grabbed attention everywhere.

Looking more high-school math teacher than gangsta rapper, the video saw Kritenbrink play an applicant in the second season of popular rap talent show Rap Viet. Sporting an array of shirt and tie combos, he strolls through Hanoi and Ho Chi Minh City with a small entourage of men and women, including Wowy, a 32-year-old rapper and one of Vietnam’s modern rap pioneers. The performance left people divided: the domestic audience seeing it as impossibly cute, more cynical types seeing it as a moment of unforgivable high-cringe and worse.

Regardless of responses the rap was clearly well-intentioned and dropping just ahead of Tet was well-timed too. Practically no one in the country hasn’t heard about Rap Viet: its popularity has inspired numerous advertising campaigns for everyday products, and even a controversial Rap Kids show. The embassy’s approach seems to have paid off, as evidenced by the 1.5 million views the video garnered on its official Facebook page alone.

But just what was all the fuss about? Surely, the video was just a bit of harmless fun, something to be praised.

“For me as Vietnamese, it was a very joyful message for the New Year. When I read thousands of comments in the embassy‘s Facebook site, I saw most of comments written by Vietnamese share the same feelings like me. We Vietnamese just love singing, dancing, laughing. Happy New Year!” one tweet read.

Indeed, the general reaction from the Vietnamese community was overwhelmingly positive. From a local perspective, Kritenbrink’s formula was a sure-fire win: taking advantage of the recent rise of rap in the country, he created relatable and flattering rhymes, albeit rather pedestrian and clichéd ones.

“I drink ca phe sua da, not cappucino / From my shores to your shores, our friendship endures”

Kritenbrink’s role is to play-up and improve U.S.-Vietnam relations despite a rocky relationship between the two countries – from strains of the war half a century ago, to President Clinton’s formal normalization of diplomacy in 1995, and most recently the Trump administration accusing Vietnam of currency manipulation. Kritenbrink brought a breath of fresh air to normally austere politics, in a manner notably unlike anything local officials have done before

There were many naysayers to be sure, with it being criticized for butchering one of America’s greatest creative genres through to it patronizing Vietnamese culture.

“What a stupid marketing idea. This is an insult to Vietnamese culture, language and their people. Behave as a real adult, I would say,” another tweet read.

As a genre with strong routes in the marginalization of the black experience, some could not handle what they saw as misappropriation by a rich old white dude.

“Great to see the great white patriarchy appropriate black culture to assimilate with the Vietnamese.”

Many Americans and international critics claimed they turned away halfway through in secondhand embarrassment, mentioning the lack of statesmanship, which would be expected of Kritenbrink and his team. Criticisms also weighed in on the ambassador’s poor Vietnamese, when his bio boasts about the ability to speak two other Asian languages (Chinese and Japanese), alongside downgrading the years of experience in which he has built such impressive expertise in Asian relations.

It also begs the question: what homage can a white diplomat with minimal rapping skills pay to decades of hip hop history, as an American during, ironically, Black History Month? With rap as an art form that, in the beginning at least, was predicated so much on speaking truth to power, when elites get involved it is no wonder it leaves some with their eyes-rolling. Those in power that know little about rap often appropriate it to send a mismatched message. It is rarely a good look. Check out this Communist Party of China sponsored rap from 2019, a piece of comedy gold, and some of the finest you will see in terms of ‘just not getting it.’

And that’s the tea, folks. Regardless of how you feel about the stunt, Kritenbrink’s rap was loved by the Vietnamese, and it is unlikely that it realistically needed to do much more than that. It was always going to anger some people. Everything does in the end. Sure he did look a bit like your uncle ‘giving karaoke a go,’ but with Tet already behind us and Kritenbrink’s tenure ending soon, it will be a while until we see a similar production from him or the U.S. embassy again. For now, maybe it won’t hurt to watch the video one more time, just to bid farewell to our “boy from Hanoi.”

Related Topics:DiplomacyFeaturedRapUS Embassy
Up Next