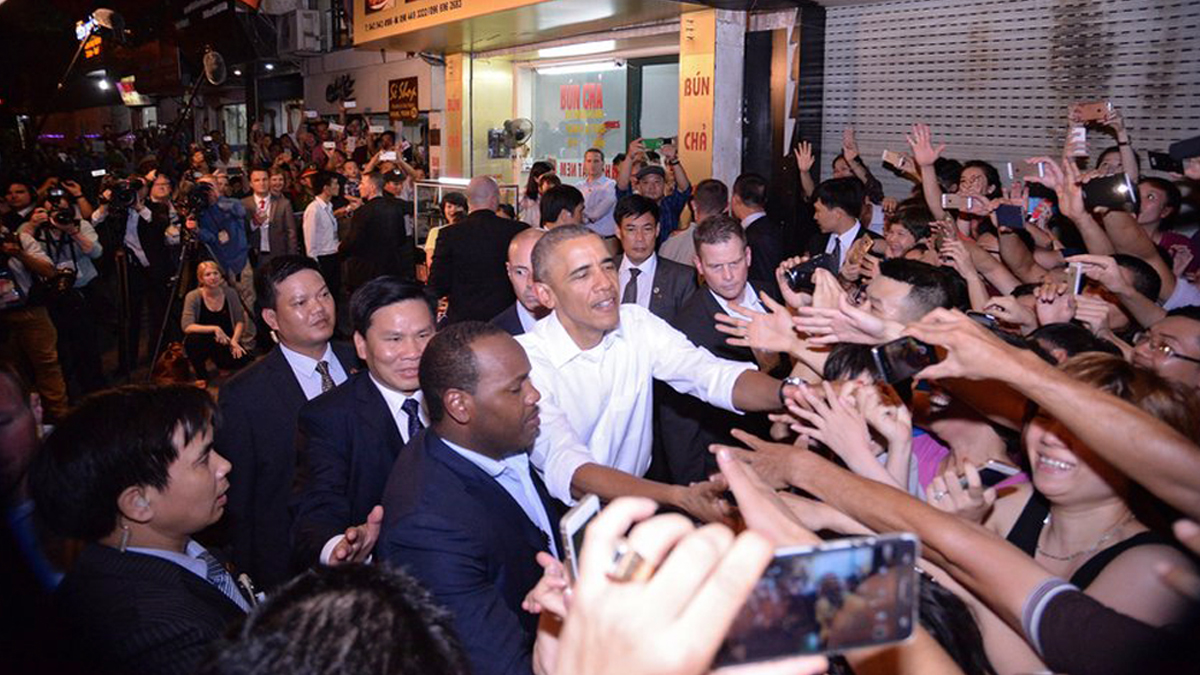 As the United States election season finally draws to a close, the world’s attention seems transfixed on the “The Land of Liberty.” However, Hanoi has shined in the presidential spotlight on several occasions. Since the American War, Hanoi has been visited by several U.S. presidents for substantially different reasons: to reaffirm both nations’ postwar diplomatic ties and reflect on the brutality of war; ending long-lasting embargoes; and to conduct historic peace talks.

President Bill Clinton is the first U.S. president on our list to visit Hanoi. In November 2000, Clinton’s arrival was not highly publicized by the Vietnamese government, so for many the appearance of the 42nd president of the United States was a total shock.

The New York Times reported that Clinton was briefly mobbed by an overeager Vietnamese crowd, who tried to touch his clothing. The event alarmed the Secret Service agents, unaware of how personal space can be a somewhat foreign concept in Vietnam. Nevertheless, the altercation did not seem too traumatic for Clinton, who continued his drive through Old Quarter, stopping at market stalls to buy Christmas gifts for his family.

Hillary Clinton also joined her husband in Hanoi, and explored Hanoi’s distinct arts scene. The indomitable First Lady visited the Old Quarter’s cramped Hang Gai street, marveling at Vietnamese silk, traditional crafts and French-inspired art galleries. Tran Hien Lan, daughter of an acclaimed Vietnamese painter, had the pleasure of meeting the First Lady. “She is one of the most well-known women in the world,” Lan told ABC News.

President Clinton addressed Vietnam in a televised half-hour speech. With only eight weeks left in his second-term, Clinton spoke openly about the tragic histories of Vietnam and the United States. In his younger years, Clinton protested America’s involvement in the Vietnam and avoided the infamous draft. As the first president in a reunified Vietnam, Clinton focused on the bridging the war-torn gap between the two former rival nations. He quoted Vietnam’s first president Ho Chi Minh, who himself quoted Thomas Jefferson, the third American president, when writing the Proclamation of Independence of the Democratic Republic of Vietnam. Perhaps some Americans would be surprised to know that Vietnam echoes the American beliefs of life, liberty, and the pursuit of happiness.

President Barack Obama’s visit is arguably the most influential. During his visit in May 2016, Obama furthered efforts to normalize relations between Vietnam and the United States by lifting a decades-old embargo, allowing the United States to sell military equipment to Vietnam. This move came at the time when China was beginning to illegally stake a claim in Vietnamese waters.

In addition to strategic statesmanship, Obama also demonstrated his respect for Vietnamese culture. During his remarks to the Vietnamese people at the National Convention Center, Obama addressed the crowds with a hearty “Xin Chao, ” admitted to enjoying a refreshing bia hoi and mentioned his bewilderment with Hanoian traffic.

“I have to say, the busy streets of this city, I’ve never seen so many motorbikes in my life,” Obama said, drawing laughter from the audience. “So I haven’t tried to cross the street so far, but maybe when I come back and visit you can tell me how.”

Like Clinton, Obama aimed to reflect on the similar ideals between Vietnam and the United States rather than their more divisive differences. However, Obama did not sugarcoat the incredible loss felt by both sides.

“In another time, the profession of these shared ideals and our common story of throwing off colonialism might have brought us closer together sooner,” Obama said. “But instead, Cold War rivalries and fears of communism pulled us into conflict.  Like other conflicts throughout human history, we learned once more a bitter truth — that war, no matter what our intentions may be, brings suffering and tragedy.”

To cap off his trip in Hanoi, Obama met with fellow American and traveling chef, Anthony Bourdain. Meeting each other at the Bun Cha Huong Lien restaurant in the Old Quarter, the two treated themselves to a bowl of bún chả. Sitting on a tiny plastic stool, the leader of the free world garnished the dish with peppers and garlic. “It’s not too elegant,” Obama said, as he plopped a large portion of white rice noodles into his bowl. “But I’m managing.” After his first few bites, Obama enthusiastically declared his love for the traditional Hanoian meal. “This is killer, this is outstanding!” he said in between slurps of noodles.

Obama’s presidential visit is forever immortalized at Bun Cha Huong Lien. The table where the president dined is encased in glass. His chopsticks and bowls still remain untouched, as if they are holy relics. The restaurant is still running, although it is more of a tourist-trap, where guests can eat like the president by ordering an “Obama Combo”- an 85k dong deal comprising of bun cha, a fried seafood roll, and a glass of Hanoi beer.

Unlike his predecessors, President Donald Trump did not speak directly to the Vietnamese people. Rather, his mission in Vietnam did not focus on the Vietnamese at all but another longtime rival to the United States.- North Korea. Following an initial meeting in Singapore, Hanoi was the second meeting spot for the unprecedented peace talks between the Trump and Kim-Jung Un regimes. In the chilly February of 2019, days before what would become known as the Hanoi Summit, the fiery-red flags of the U.S. and North Korea fluttered in the capital city’s many corners. Images of peaceful handshakes and soaring doves were pinned on every street lamp, greeting the two infamous world leaders.

The event allowed for Hanoi’s residents to unleash their creativity. In order to capitalize on a bizarre meeting between two even more bizarre men, Hanoian businesses, entrepreneurs, and artists began including Trump alongside their work. The Durty Bird, a much loved acclaimed burger joint in Hoan Kiem District offered a burger dubbed “The Durty Donald” made from double beef, double cheese, double bacon, and plenty of Russian dressing.

The crafting workshop Hatolo, based in the Ha Dinh, delicately produced visages of Trump and Un, cut from dry leaves. Tran Phi Long, the co-founder of Hatolo, had high hopes for the summit.  “It will prevent a big nuclear war, and bring peace for people around the world for 100 years,” he told CNN. Long said he believed such crafts, and similar artworks inspired by the Hanoi Summit, have a clear importance. “I think art can promote peace. We always strive to give each artwork a social concept from the beginning.”

Truong Thanh Duc, a business-savvy vendor, handmade printed T-shirts depicting the faces of Trump and Un, above the word “Peace” in big, blocky letters. While cheap to make, the shirts were hugely popular around the event. Duc took home around 20 million VND each day during the Hanoi Summit. The iconic shirts can still be seen in Hanoi today, worn by Vietnamese and expats alike.

“Hanoi was very much promoting itself as ‘the city of peace’ during this time,” Wade says. “It really felt like the Vietnamese government saw this as their moment to shine on the world’s stage. From my layman’s perspective, they stepped into that role nicely.”

Despite Vietnam’s enthusiasm, nothing of substance came from the Hanoi Summit. Trump abruptly abandoned the peace talks when Un demanded all sanctions be lifted from North Korea, which Trump identified as nonstarter. The two leaders never met at the lavish Metropole Hotel as planned.

Perhaps this is a wise decision on Trump’s part as North Korea’s nuclear program has been progressing at an alarming rate. Any concessions given to North Korea without keeping its nuclear capabilities in check could be an apocalyptic mistake.  However, the unresolved negotiations are a major letdown, especially by Trump who considers himself the master of the “art of the deal.”

Wade, who witnessed both Obama and Trump’s presidential visits to Hanoi, sullenly compares the two events.

“I feel a bit blue by the different vibes between the two presidents,” Wade says. “You have Obama drinking beer with Bourdain versus Trump petulantly walking out of a peace summit.  There seemed to be a circus atmosphere to Trump’s visit. I think it’s emblematic of the degradation of the political scene back home.”

With all of its power and wealth, the 244 year-old United States has only been around for a fraction of ancient Hanoi’s 1,000-year reign. No matter the results of the U.S. elections, Hanoi will still be here to honor the past, maintain diplomacy, and lead a prospering Vietnam into the future.