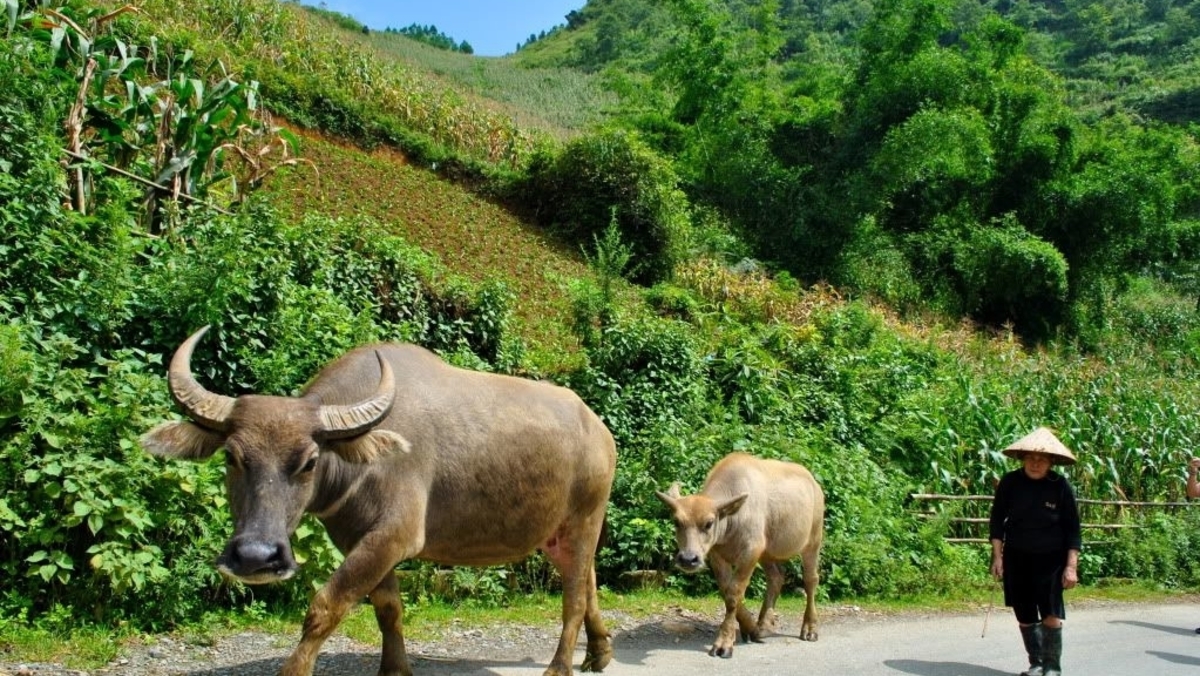 You have seen them lumbering on the side of the road, bellowing from a dirty watering hole, or apathetically grazing in green pastures. With their large horns, heavy hooves, and gentle eyes, the mighty water buffalo is a staple of Vietnamese fauna. No trip to Vietnam is complete without taking a photo of these friendly beasts of burden.

To celebrate the Year of the Buffalo, Chào has compiled some brief facts about our favorite bovine buddies.

Since ancient times, buffalo have been an important tool for Vietnam’s agriculture. Farmers use the buffalo mainly to plough rice fields. Arguably, without the buffalo, farming in some areas of Vietnam would be virtually impossible due to the hilly landscapes and terraced rice fields. Modern-day automation is unable to effectively plough this type of terrain. Fortunately, buffalos are able to navigate the steep altitudes while carrying heavy farm equipment.

Many farmers treat the buffalo as a member of their family because of their importance to the household. When not hauling materials, buffalos also look after the children. There is a Vietnamese saying, praising the buffalo as both laborer and caregiver: “The husband ploughs, the wife sows and the buffalo draws the rake and is friends with the children.”

As a beloved animal in Vietnam, the Vietnamese imbue the buffalo with many favorable qualities. With its massive size and charming disposition, the buffalo symbolizes both bravery and happiness. Also, because of its importance to the household, the buffalo is also known as a symbol of prosperity.

Those born in the Year of the Buffalo are said to have similar traits with the animal, such as diligence, trustworthiness and strength. Some famous people born in previous years of the buffalo include Walt Disney, Cristiano Ronaldo, Barack Obama, Margaret Thatcher, and Vincent Van Gogh.

Some have dubbed buffalos as “living tractors of the East” due to their contributions to farming. However, if they weren’t so docile, their impressive dimensions would surely make them terrifying apex predators. A wild buffalo can grow over two meters tall and weigh over 1,000 kilograms. Despite their hugeness, buffalos are also surprisingly quick. They have a speed of up to 48 kilometers per hour! Thankfully, a buffalo’s diet consists of plants such as reeds, grass, herbs and other vegetation.

Despite being revered in Vietnamese culture, a disturbing local tradition involves making buffalos fight, often to the death. The Do Son Buffalo Fighting Festival is an annual event that takes place near Haiphong. According to beliefs, the tradition blesses the community with luck and prosperity… just not for the abused buffalos. These poor creatures are led to an arena where they fight each other as the crowd cheers on the chaos. To add insult to injury, the “winning” buffalo is slaughtered as a sacrifice to the Water Goddess.

Recently, the festival saw its first human fatality. One owner was gored by his own buffalo and later succumbed to his injuries. A massive controversy followed, with many Vietnamese wishing the tradition to be banned altogether. Despite the avoidable bloodshed, the festival continues.

Because of their importance to Vietnamese agriculture and identity, depictions of buffalos can be found in several artistic mediums throughout the nation. For example, many Dong Ho paintings feature a buffalo with a boy playing the flute on its immense back. This image reflects the pastoral friendliness seen throughout the Vietnamese countryside. More modern paintings of buffalo appear in a recent art exhibition, in celebration with the Tet season.

A buffalo also appears in a traditional children’s story. While the tale offers a charming lesson on wisdom, it also provides a humorous reason for why buffalo has no front teeth. Long story short, the animal lost them when hysterically laughing at a burning tiger (as you do).

Interestingly, a herd of buffalo briefly became movie stars in 2004 film “Buffalo Boy.” Director Minh Nguyen-Vo “cast” 300 buffalos for his picture, detailing the harsh life of farmers in Vietnam’s Mekong Delta. While some may criticize it for being slow, the beautiful film steadily moves along to the pace of a unbothered buffalo.

Some of Hanoi’s best date options