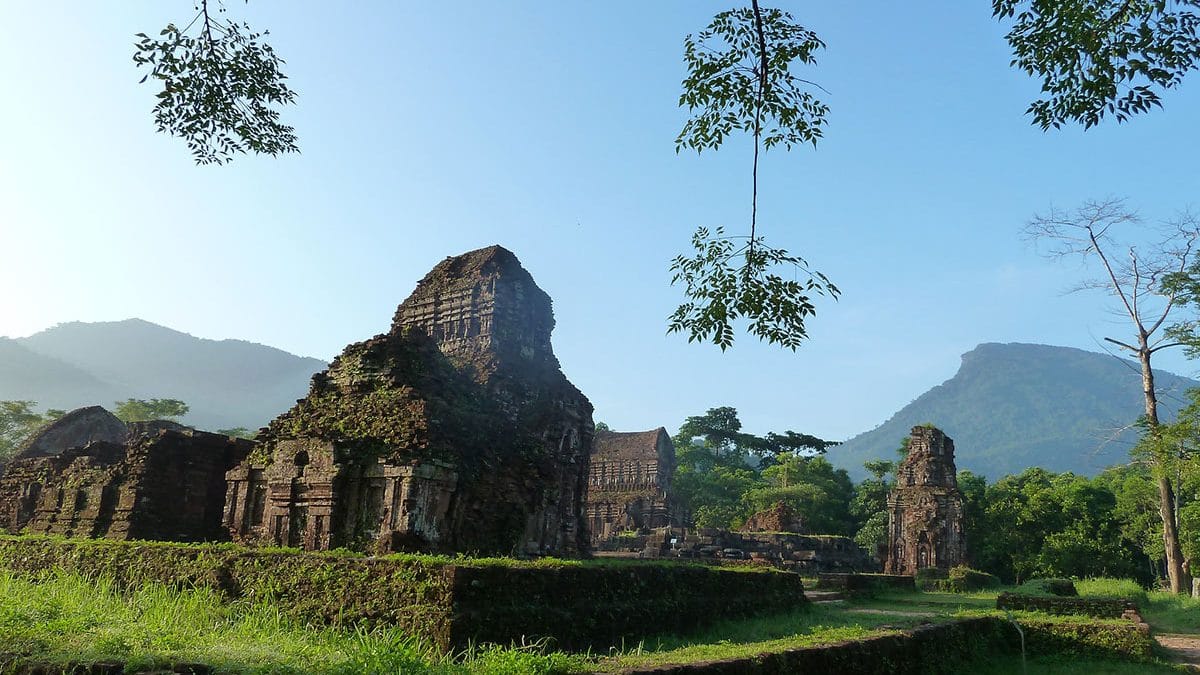 A kingdom spanning centuries lost and rediscovered. An ingenious people leaving researchers with questions unanswered. An ancient treasure used as a modern-day battleground. Vietnam’s ancient city of my Mỹ Sơn is a window into a rich distant past alongside a more traumatic one from not so long ago.

The somewhat lazy term “mini Angkor Wat” will leave any visitor a little torn. After all, why not just visit the real thing? But what draws you in to these ruins hidden deep in densely forested Central Vietnam is the site’s colored past. Anyone wishing to channel their inner Indiana Jones will fast feel gratified exploring Mỹ Sơn.

The area was once home to the illustrious Champa Kingdom, originating in the fourth century. The people were strong warriors often at war, so it should come as no surprise that this site is strategically placed in a valley surrounded by towering mountains. The kingdom collapsed in 1694, and the site became long forgotten until these Hindu-inspired relics were “rediscovered” by explorers in 1889.

” To this day nobody fully knows exactly how the Champa sealed the bricks used to construct the many towers. “

Mỹ Sơn is a bumpy one-hour bus ride from the bustling tourist town of Hoi An, the drop-off point is nothing more than a secluded parking lot. For many the best time to arrive is at sunrise to watch the rising red skies seep between the brown-red ruins. More power to them, but our party was a little more leisurely, finding the area just after 10 a.m. with the sun already blazing overhead. Sweat poured off us in buckets as we slowly ambled through the entrance walkway, which is interlaced overhead by brick arches. Unlike the actual Angkor Wat, you are less likely to hear about this so-called mini-version in the guidebooks; there are few tourists, so it offers a gentler more intimate experience.

It was not quite completely unspoiled; a little cafe serving iced coffee, frozen drinks and cold water (stock up!) offered welcoming relief from the outset. After gulping down your drinks, you enter a small museum that introduces the area and the stone carvings ahead .

For some, staring in awe at these epic monuments is enough. For others, having a guide is essential as the ruins scattered across the grounds offer little in the way of explanation. Our seasoned guide made us laugh as he explained the Hindu origins of the site and its history spanning beyond even the Champa rule.

“A further mystery hidden in plain sight for thousands of years on the tower walls is the series of Sanskrit writing inscribed on stone pillars inside the complex.”

To this day nobody fully knows exactly how the Champa sealed the bricks used to construct the many towers. It has left researchers baffled. It is thought they may have used a plant-based resin, but it has yet to be duplicated. Newly-reconstructed parts of the towers are already crumbling and covered in moss, while much of the original brick work still remains perfectly sealed, smooth and bare. One wonders if the mystery of this ancient super-sealant will ever be solved.

A further puzzle hidden in plain sight for thousands of years on the tower walls is the series of Sanskrit writing inscribed on stone pillars inside the complex. They are still being translated today. The writing is breathtaking — intricate, beautiful and beguiling inscriptions, their full secrets still unlocked. For now everyone is going to have to wait to find out what tales these slabs tell — ancient Sanskrit still not an option on any mobile translation app.

Perhaps sadly, Mỹ Sơn is not just a site for a fix of mysterious 1,700 year old history. The area was heavily bombed during the American War and even used by the Viet Cong as a military base. The ancient fortress was no match for the U.S. bombs and much of the compound was laid to waste in 1969. The scars from the bombs can be seen today as deep craters freckle the landscape. Pieces of temple overgrown with plants peek out of craters where bombs once hit.

But despite the bombing much remains, as if Mỹ Sơn were as strong as the Champa warriors who created it. From prominent kingdom to forgotten ruin, to being rediscovered and bombed, Mỹ Sơn has seen more than most, and the area became a UNESCO World Heritage Site in 1999. Today visitors from around the world are able to step back in time and walk in the footsteps of the ancients.

Despite hardships, the intricate stone carvings, towers and temples of worship remain; a place to gently run your hands over the hot bricks that were once a place of worship and home to the cultural center of one of the longest-running kingdoms in Vietnam; and finally to close your eyes and imagine exactly what Mỹ Sơn might have looked like in its glory days of yore.

Pro Tip: Head to the nearby docks and take a boat back to Hoi An. The boats drop you off right at the tourist area where you can grab some delicious food and cold drinks, while experiencing the lively Hoi An night market.