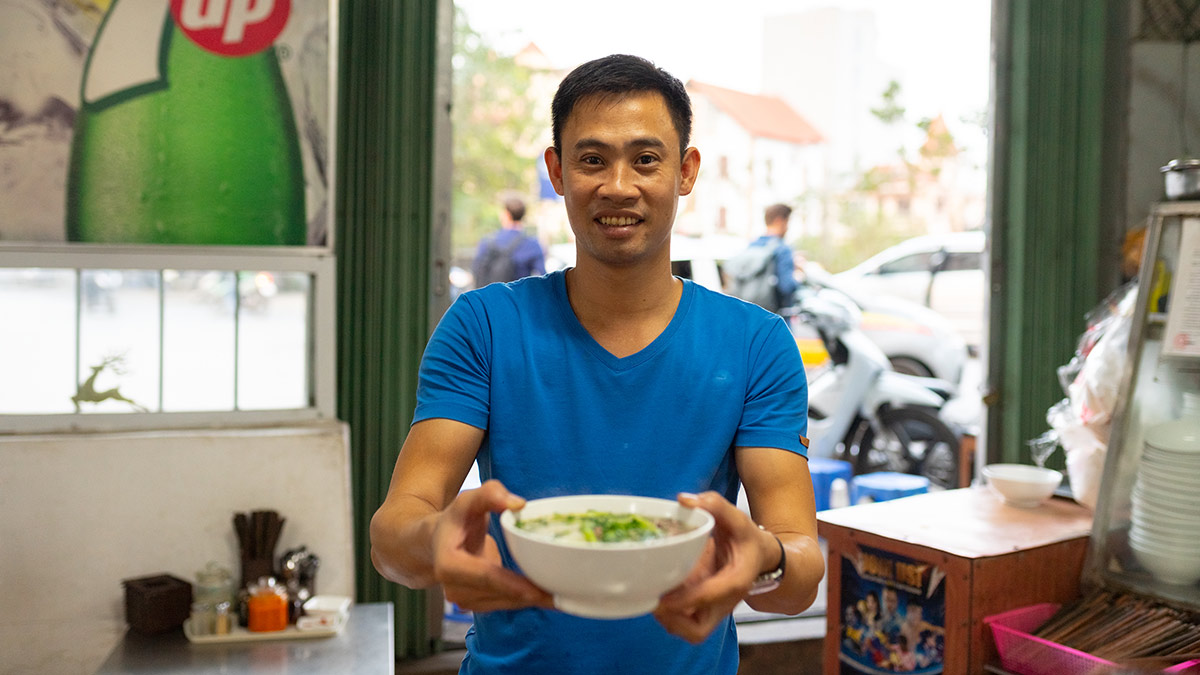 Spicy Pho Bay is something of a Hanoi expat institution. Though situated on the corner of Xuan Dieu and Dang Thai Mai, a stone’s throw from the many smart western restaurants that run near and along the West Lake, it has kept decidedly true to its roots, its atmosphere and prices remaining authentically Vietnamese. And the food is delicious too: bowls of steaming pho, that local staple, perfect for breakfast, lunch or dinner.

For a mere 30,000 VND, generous bowls of pho are served and for an extra 5,000 they will throw in a few sticks of banh quay to dip in to this most hearty of soups. Whereas many pho restaurants do pho and pho alone, Spicy Pho has many other dishes to choose from including rice and noodle dishes, fried, boiled or steamed.

One favorite is pho xao gion, a tasty dish of fried pho noodles topped with morning glory, beef and onions costing 50,000 VND. You can opt for a vegetarian version of many of the dishes here, though pho is an exception as the broth is made with meat.

The pho itself does not come particularly spicy. Instead Spicy Pho got its name because of its exquisite homemade chili sauce. If you like a little spice, try adding this to your meal, along with the usual lime, garlic and pepper offered on the table. The staff does not speak much English, but they are extremely friendly and the service is quick. They offer cups of fresh hot water to rinse your utensils off before using them. The atmosphere is no-frills and traditionally Vietnamese, with long tables to share and simple plastic stools.

There are an assortment of drinks available including water, soda and beer for sale at local prices. The restaurant is small and can get packed at peak hours because of its famed pho and other dishes. An open air kitchen means you can watch how your food is prepared if you so desire. For those on two wheels, there is even parking out front. For a tasty, cheap eat, Spicy Pho Bay is hard to beat.