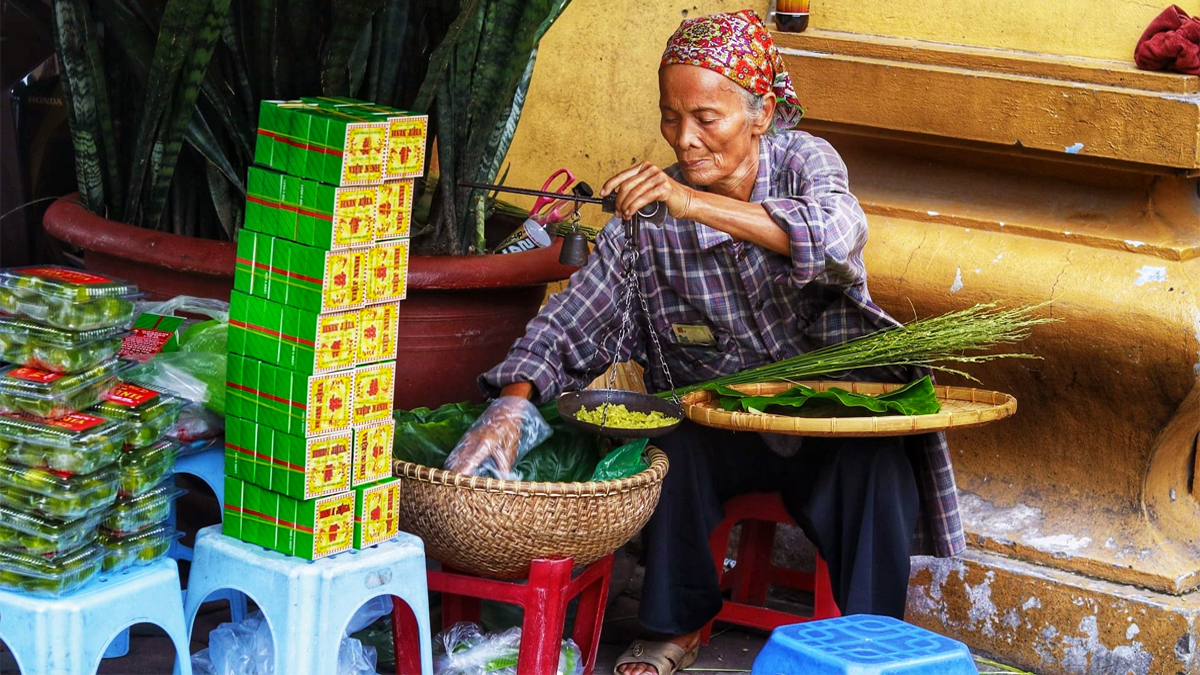 Whizzing through downtown Hanoi on my trusty Honda Lead–truly a bike for all seasons–the sweet invasive scent of hoa sua (milk flower) now swirls the streets of Phan Dinh Phung and Hoang Hoa Tham, as well as around the West lake. Juicy, ripe persimmons can be spotted at stalls on the corner of every local market. Gaggles of kids circle a vendor selling dracontomelon, no longer as a summer drink, but as a snack that has been peeled, heavily sugared, and salted to perfection. Fall is finally here.

The smells and colors make me feel nostalgic, and I suddenly veer towards Vong Village in Cau Giay District, eager to get my hands on one of the season’s most quintessential delicacies: com (green rice). The natural green hue of these young rice kernels is unique, and its flavors subtle, with a slight aromatic scent and subdued sweetness.

The cradle of com

Vong Village is Hanoi’s center when it comes to making com and, curious to know why this particular dish is dubbed as autumn’s favorite child, Chào spends the morning chatting with the artisans who make it, eager to learn about its painstaking production. We are told, as with so many of Vietnam’s iconic dishes, com came about through accident, not design.

Legend has it that a thousand years ago, unusually heavy storms crashed through the rice fields of Vietnam, destroying nearly all the crops. Farmers suffering from famine tried to salvage what little they had left of the immature rice by roasting the grains to remove the husks. Soon this lowbrow food born of desperation became known for its own charms, and a certain amount of rice has been harvested early ever since. Cut to today, and this humble green grain has managed to give rise to a myriad of creations, enough to make a com-themed three-course meal even. Perhaps, stir-fried com for the entree, sticky rice with com meatballs for the main course and, for the grand finale, com sweet dessert soup or ice cream.

One would imagine that those who make the local snack are sick and tired of the stuff, but that does not seem the case with Quynh, 38, who has long been a com producer alongside her husband. “I actually still enjoy it from time to time. But I prefer having it in a simple way, just as is, with a banana,” she says.

Quynh ‘s family is one of the few that still stick to traditional artisanal methods when it comes to com-making: “My mother-in-law passed it down to us; we’ve been around for seven to eight generations. Family heirloom, you know how it is.”

Though invaluable, this inheritance is no sitting pot-of-gold, and it’s tiring work. Quynh tells me her husband has been up since 4 a.m. collecting and plucking the young grains, and won’t be back until noon. From the paddy field to the dinner table, there’s a tricky five-step process that the couple single-handedly take on themselves.

“Once he’s back, we’ll clean up the grains and throw them in this pot here for roasting,” she says. Wearing a silk scarf to hold back her hair, Quynh repeatedly checks on the fire to make sure the heat is set at the perfect low temperature, as the pot mechanically stirs its content in circular motion for the next hour and a half.

“Like those ladies over there. Their stuff has sugar added in. Anyways, that’s just tricking the buyers. Some even buy old rice, so they just spray it with water to soften it up and sell it to the masses.”

Once that’s all set, the outer husk is removed, revealing the soft, edible insides. They are then thrown into an impressive, if very loud, automated mortar-and-pestle of sorts–to eliminate any remaining husks and further soften the grains. As the wooden block beats down heavily, Quynh manually mixes it further to make sure nothing is left behind. Seeing our slight concern that her hand is about to get lopped off, she reassures us: “It can’t possibly hit me, just listen to the rhythm of the pounding.”

Last of all, the green rice is sifted through a flat bamboo tray. Pound then sift, pound then sift, the process is (ideally) repeated seven times to get the perfect com.

The villagers are proud of their expertise and wax lyrical about how to make their green rice just right. Harvest timing is particularly important. “If it’s good, the grain should even be a little milky inside. Don’t use old rice, I know I’d never!” says Hai, a local who also manufactures com in the village.

“When you eat it, the grain should look flat, not puffy and round, and the sweetness is natural, so it shouldn’t taste overbearing,” says Hai as he lowers his voice and gestures toward nearby vendors. “Like those ladies over there. Their stuff has sugar added in. Anyways, that’s just tricking the buyers. Some even buy old rice, so they just spray it with water to soften it up and sell it to the masses. I bet you if you put it in the sun, it’ll go bad immediately!”

Whether these claims are true or not, Hai, with his confident demeanor and familiar friendly banter makes for a convincing salesman, and I finally give in, buying com from several different vendors to see how the taste compares. Each artisan carefully wraps the orders in lotus leaves to retain the scent and moisture. It’s important to note that com barely has the same lifespan as your average mayfly. After one to two days, it may turn into a pile of lumpen, tasteless starch. It needs to be eaten quickly, so its best ordering relatively small amounts at a time. It costs about 200,000 VND a kilogram.

“She would keep up with that routine for years, up until I was in secondary school at least. Now I still eat it, but because I buy it myself it’s just not the same.”

Keen to devour my bounty, I call over a few friends for a testing-tasting feast, hoping they can help me tell apart the good from the not-so-good stuff. Ten seconds go by, maybe 20, as we go through the slow, deliberate tasting. We stare at each other blankly before everybody admits they cannot taste a darn bit of difference. Perhaps the palettes of us 20-somethings lack the right degree of sensitivity, but I suspect Hanoians are not so fond of com not for its mind-blowing flavor, but the rich remembrances it brings to the fore. If Proust were Vietnamese, he would probably have written about com not madeleines.

“It’s more about bringing back happy memories with our families at this time of year. Back when I was just a little kid, I can still remember the afternoons patiently waiting for mom to come home from work because she would always bring snacks. Often, you guess it, com,” says Duyen, a 21-year-old student. “She would keep up with that routine for years, up until I was in secondary school at least. Now I still eat it, but because I buy it myself it’s just not the same.”

Indeed, with its dragons and lanterns, and bundles of com, Fall might just be the most nostalgic season of the year in Vietnam: a time to play Trinh Cong Son‘s “Mùa Thu Hà Nội” (Autumn in Hanoi) and to munch on this subtly, sweet, iconic green grain. Now get to it and try some soon, for winter is sure to arrive before you even know it.

All photos taken by Minh-Anh.

Time to Taco ‘Bout It