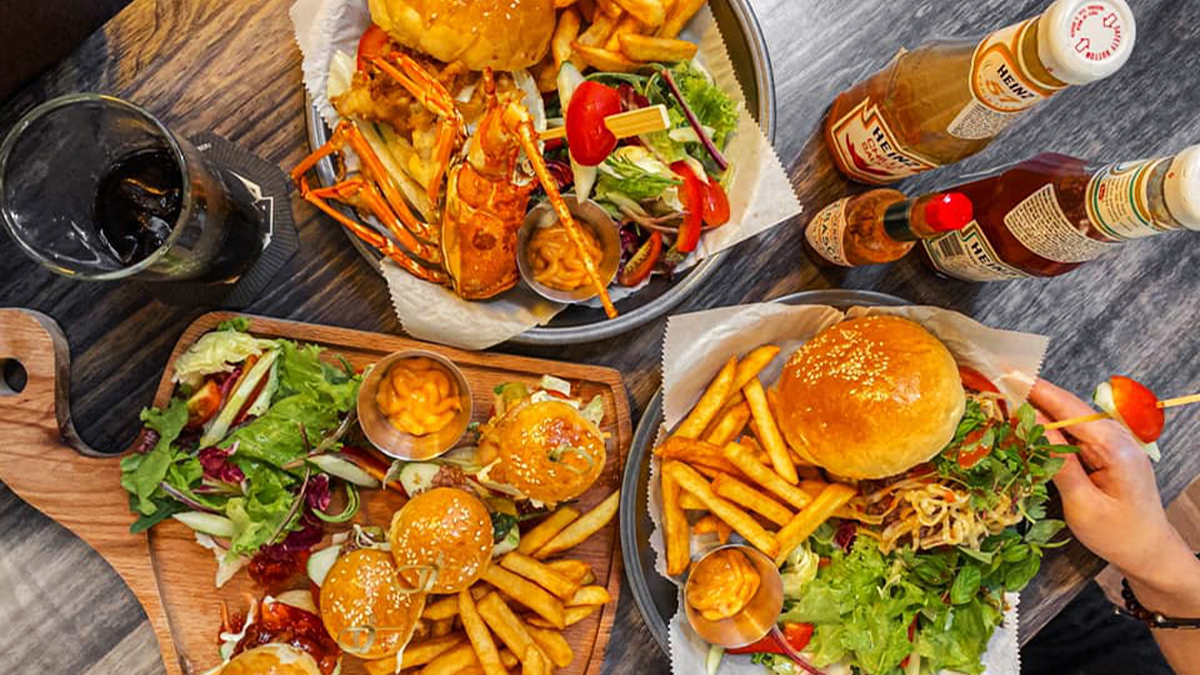 In contrast to its age-old surroundings, Boogie Burger casts a contemporary urban vibe over Hanoi’s traditional Old Quarter. This cool burger joint was opened in August 2020 by Duc Le and Huy Vo – two friends that share a love of good simple food. Situated in one of the most upbeat sections of town, the diner is a strong addition to Hanoi’s burgeoning food & beverage scene.

Walking through the stylish wooden entrance, we were instantly welcomed with the sound of sizzling meat patties, the indelible smell of fried onions, and smiles from friendly staff. Adopting the open-kitchen concept, Boogie gives off a casual, pub-style atmosphere, with the indoor space giving a nod to trendy industrial design. The dark oak theme creates a cozy yet classy feel, while the sleek black details from the windows, chairs, and lamps create an aesthetically pleasing color scheme– an impeccable background for your burger photos.

Boogie is neither Le nor Vo’s first foray into F&B. Vo’s first was a Chinese restaurant, inspired by the years he spent in Beijing as a student, whereas Le runs two beer gardens in the capital. We ask Le why he felt the city needed yet another burger place but before we could finish our sentence, he is pulling up his sleeve to show us a tattoo of a burger. Ok, this is a guy serious about his burgers.

After spending much time perfecting their menu, the current version has a wider variety of burgers, appetizers, and brunch options. Glancing through the menu, the intriguing Hanoi Phở burger captures our attention.

“Putting The Lobby on the menu was a risky move for us,” Le laughs. “How often do you find someone willing to pay 500,000 VND for a burger?

“When we were coming up with the menu, we wanted a combination of classic burgers as well as fusion ones. And so I brainstormed with the chef to present this signature recipe. Hanoi Pho captures both the quintessence of the traditional dish as well as Western flavors,” Vo told Chào.

Intrigued, we opted for the Combo Bite-Size (180,000 VND), for which you pick a combination of any four small burgers. We selected The Boogie Man, Duomo, Hanoi Pho, and Teki. Orders come with a side of fries, a salad, and a soft drink of choice. Served on a minimalistic wooden platter, each burger is meticulously assembled so that every layer of ingredients is visible. The sesame-topped, golden glazed buns perfectly hug the filling, which is all held together by a fancily knotted bamboo pick.

The result was on point, and Boogie might just be one of our newest favorite burger joints in the city. Each recipe is carefully crafted so that meat, salad, and signature sauce complement one another perfectly. Every burger has a unique touch– either a pop-of-flavor, intriguing texture, or an unimagined combination of ingredients. Both founders agreed on The Lobby–a lobster burger—as their standout dish.

“Putting The Lobby on the menu was a risky move for us,” Le laughs. “How often do you find someone willing to pay 500,000 VND for a burger? Though I can guarantee, everything made here is fresh. We have ingredients coming in every day, all the buns are baked and consumed within the day.” Boogie also offers a wide range of craft beer options from renowned breweries such as 7 Bridges and Belgo.

Currently looking into opening a location in Tay Ho District, the duo has big plans. For now, this is a welcome addition to the ever-growing Hanoi burger options. Why not boogie on down to the Old Quarter and give their tasty buns a whirl?