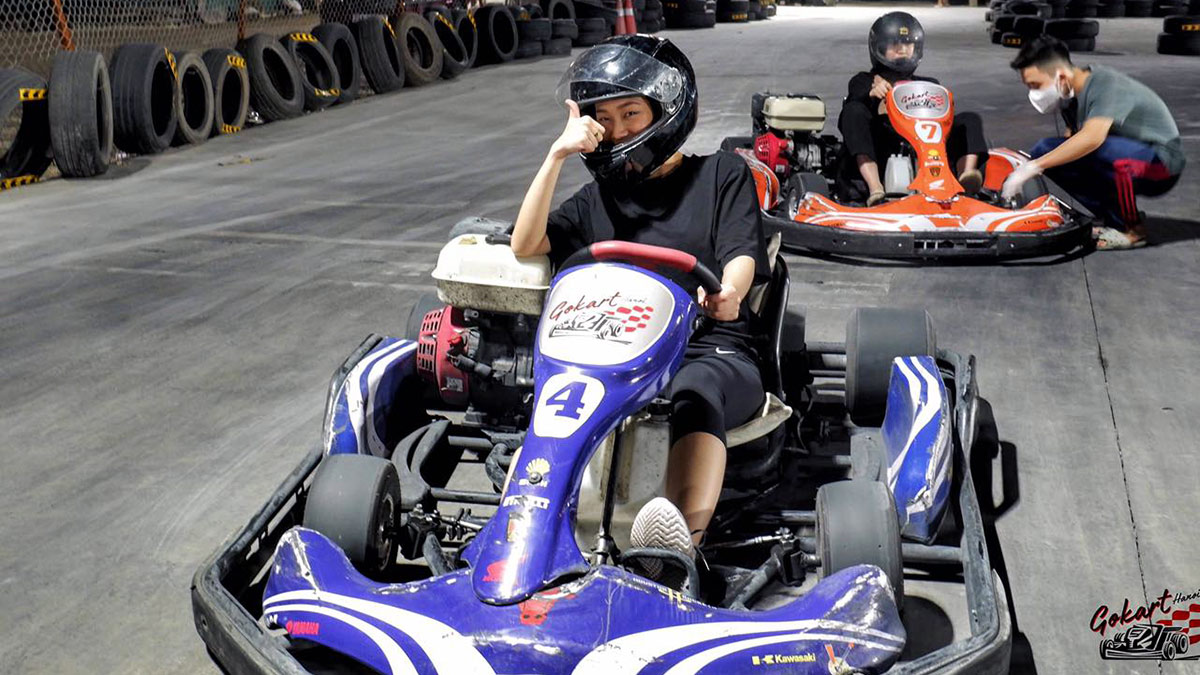 Who among us did not play Mario Kart growing up? Aside from providing ample opportunities to master your Super Nintendo game controller, it was perfect for showing your little sister (or brother) who was boss. Now being all grown up, you can best your friends at it in real life at the newly opened Hanoi Go Kart.

At 300,000 VND per person, you will want to take advantage of the half an hour this gets you. However, don’t be shy about bargaining if you have a group. Our gang of six was able to haggle the price down to 250,000 VND a head, which made the exhilarating spins around the track more than worth it.

Getting there can be tricky as it is nested in the southern end of the city and the entrance is a bit nondescript (there’s no sign), and almost intentionally seem to want to keep a bit of a low profile. It is also adjacent a trucking lot but do not let that put you off. The track is indeed set up for you to play around, as its four windy loops and candy colored karts suggest. So take your pick of cherry red, orange crush, lime green or grape purple, gear up and put the pedal to the metal.

Once you are all geared up, a friendly attendant will line you up at the starting line and once he waves that checkered flag all bets are off. Although there is nothing you can “power up” with and you cannot throw turtle shells at each other, the adrenalin rush alone is enough to keep you pumped.

The competition is also fairly stiff as there is just enough room to squeeze by or bump one another on the straights and corners, so it is best to take it very seriously and get to the front as soon as possible. The only way to win is to careen daringly around the impossible turns and keep a mental score of how many times you are or are not passed. Try not to crash into the barriers though, they definitely move upon impact.

When attendees were asked on how to achieve victory, opinions varied on how to reach top velocity. One man claimed that it was “faster if you don’t drift around the corners.” While another disagreed and insisted that “it’s better to drift a bit before accelerating as much as possible.” Either way there is nothing like rising from the fray as champion, ready to spray champagne (ok, probably beer) over your loser mates. So keep circling until a staff member waves you to the side, at which point there is nothing left to do except (hopefully) receive your accolades.

As mentioned, the track site is fairly stripped down so bring your own water or other tasty beverages if you get thirsty. All the excitement can leave you pretty parched and you can gulp them on top of the observation deck that looks down on the track.

With F1 nearing, a day out on the Hanoi Go-Karting track is a not a bad way to find your inner Lewis Hamilton.