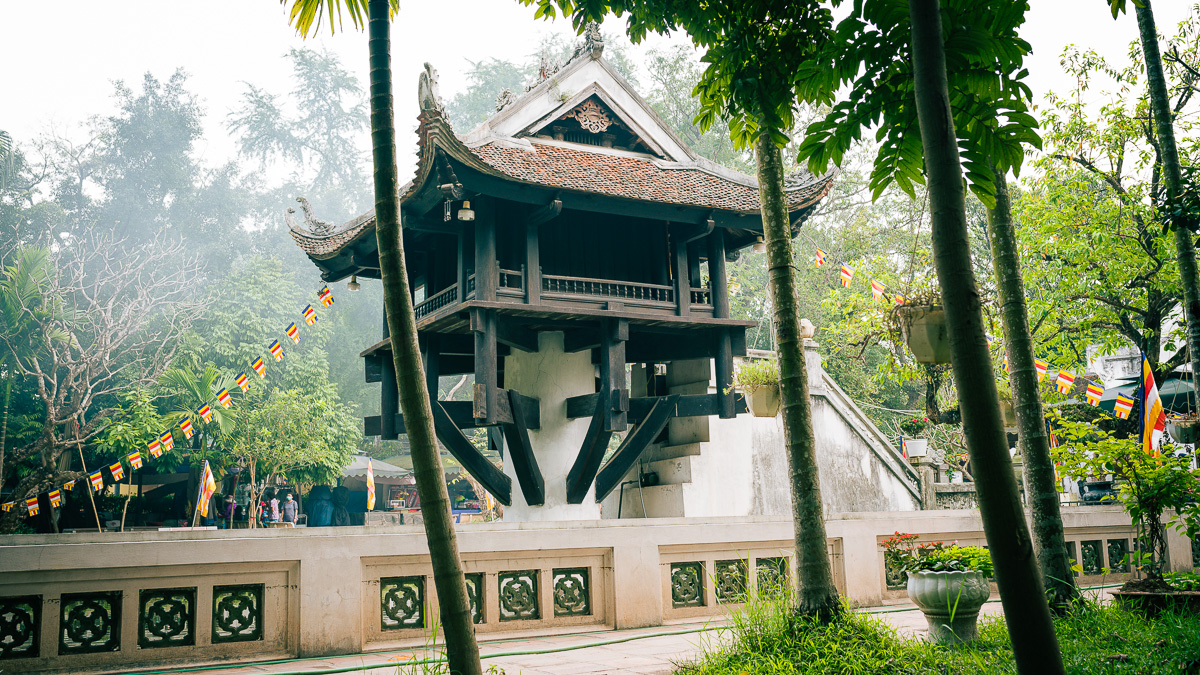 Sometimes all you need is a bit of peace and tranquility, and in such times a visit to a temple can be just the tonic. Hanoi’s humble One Pillar Pagoda may be small and sweet but nonetheless it is regarded as one of Vietnam’s most iconic temples and a quiet morning here invariably proves to be a calming experience — and, as ever in Vietnam, the structure and its grounds come with an intriguing story.

The structure was originally built by the Emperor Ly Thai Tong in the mid-11th century; alas the original 900-year-old temple was blown to bits in 1954 by the departing French colonialists in what was widely regarded as an act of petty vengeance. However, the Vietnamese government subsequently rebuilt what can be seen here today.

Ly Thai Tong was an heirless Emperor who one night had a dream. And within that vision, he met a compassionate goddess, the Vietnamese Buddhist deity Quan The Am Bo Tat – The Goddess of Mercy. In the dream, she was sat upon a lotus leaf and handed him a son. Soon afterwards the emperor met a peasant girl and took her for his wife — and lo and behold – she bore him a son.

In an act of gratitude and following guidance from a monk he was advised to build a temple in the middle of the lotus pond, the exact one he had seen in the dream, and so he did just that. A richly gilded effigy of Quan Am is found inside the temple in a small three-metre square shrine. The temple as a whole is said to represent the lotus flower, the Buddhist symbol of purity, as it is regarded as a flower which blossoms in a muddy pond.

After the temple was first built, loyal followers flocked daily to give thanks and support to their Emperor, they would also pray to Quan Am and ask for a long and successful sovereignty. The pagoda became a centre for the annual royal ceremony to celebrate the Buddha’s birthday.

The monarch would hold a Buddha-bathing ceremony which attracted monks and laymen to attend; at the end of the ritual, the emperor would release a bird which was followed by the people.

Behind the pagoda is The Sacred Fig Tree, which scientists refer to as Ficus religiosa and Buddhists call the Bodhi Fig Tree (“tree of awakening”).

It is perhaps apochryphal, but this particular specimen is believed to be an offshoot of the very same tree under which the Buddha became enlightened. The tree was given as a gift from the Indian Prime Minister Razendia Prasat as offering to President Ho Chi Minh in 1959.