The chessmen of Hanoi 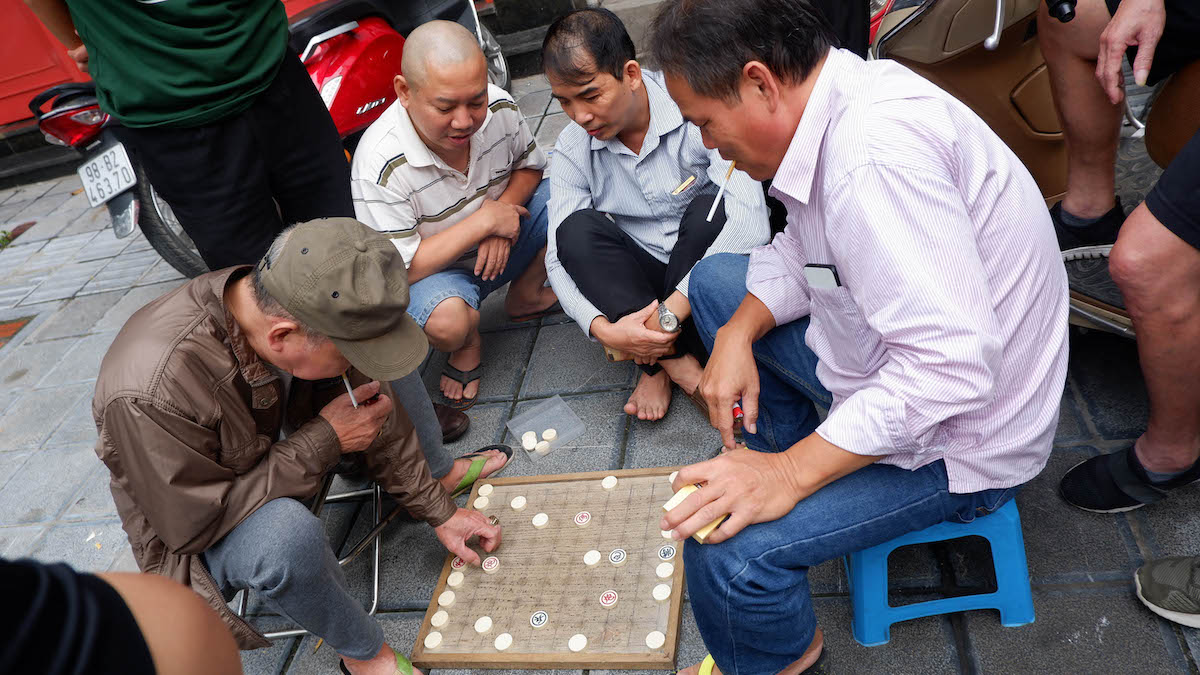 The sun gradually leans toward the skyline on a hot Saturday afternoon, and one by one they show up at the cramped entrance leading to Vua Pagoda in downtown Hanoi: a truck driver from across the street, the heir to a nearby petrol pump, an international student just back in from Europe. One pulls up a chair. Another grabs a cup of tra da. An old man grabs a few peanut candies. There is a silence that is somehow calm and tense. Two serious looking middle aged men are hunched over a board full of round pieces on a dusty aluminium table, in poses Rodin would be proud of. Thinking. This is serious. This is xiangqi, a form of chess that has been played endlessly, passionately across the streets and parks of Hanoi for centuries.

“Move your army. Stop beating around the bush! If you want to surrender say it now, coward,” an excitable bystander suddenly shouts over one of the boards.

“This is the way the fun begins,” says Duc Nguyen, the owner of a hardware stall eagerly waiting his turn. “Nobody who comes here can hold their temper for long. Guess using your brain and your voice at the same time is a thrill, eh.”

Xiangqi (literally elephant chess) is a form of chess originally from China but played throughout Vietnam and East Asia. Originally the pieces were often made of ivory but now they are more likely wood. The precise roots of the game are debate, but in the Vietnam subconscious the game is forever Chinese, which seems self-evident from the Mandarin calligraphy carved into each of the pieces that represent two armies, with their attendant horses, cannons, elephants, chariots and soldiers.

“Spending my spare time here to avoid disturbing my wife, that’s how you kill two birds with one stone.”

Hanoi’s chessmen uphold the spirit of them game with a curious mix of swearing, cussing and riotous laughter. A couple of hours outside the pagoda and you can quickly learn every Vietnamese swear word under the sun. While the men play chess, and it is always men, regular life goes on around them, and occasionally a competitor jumps up from his chair to sell a box of cigarettes or an ice tea before quickly sitting back down and refocusing on the game.

Different from international chess, most of the games here have a pho, short for the archaic Vietnamese word pho ta, meaning assistant. The main duty of this role is an advisor to give an objective overview of the battle, supporting both players by giving tips. Anyone watching can become a pho and they sometimes seem to act as a double agent of sorts–one minute suggesting bold, outstanding moves for one player, then suddenly telling the opposition the correct defensive moves. Interestingly pho is also slang for whore, in what is perhaps a nod to the capricious untrustworthy nature these assistants seem to take.

“Each move of an unknown piece contains curiosity, twists, and stimulation for both the players and audience, even though they already know all the strategies,” Duc knowingly explains with a spark in his eyes.

The Vua Pagoda, on bustling Thinh Yen street, surrounded by a bustling electronics market for electronics, is where De Thich–the god of xiangqi–is worshiped. Accordingly a small adjacent alleyway has become one of the most popular places for the local chessmen, both professional and amateurs, to come and test their skills playing this ancient game.

Nobody here refers to anyone by name. It’s likely they cannot remember. Once the game begins it seems unnecessary. Your opponent is your opponent. They come for the battle of wits. Identities here are eradicated. No one care for anyone’s age, job or personality. Respect is gained purely through how you move the pieces.

One thing that does seem to be missing is women. As in most forms of chess, the game seems entirely dominated by men, as if a female challenger would somehow upset the uneasy equilibrium.

“You won’t see any ladies here? Xiangqi is a real rumble made for masculinity. I don’t say there is no place for women here. It’s just that they usually choose to play Western chess, which is so much elegant and graceful compared to this madness,” says a mysterious man called Driver dressed in a military suit.

In the middle of a street not too far from this noisy alleyway, there is another boisterous chess arena. This one is populated by retirees. “We only need a spacious and chill place for passersby to stop to watch and enjoy the xiangqi,” says Tu, a former employee of the Vietnam News Agency who lives two blocks away. Though it’s hard to decipher want he means by ‘chill.’ Old men are bickering over a game; there are noisy sounds of bikes and car engines whizzing by, not to mention the sound of bargaining echoing from an adjacent flea market.

“Without people, chess pieces are just dead objects. Without xiangqi, people will wither.”

Tu and his old pals pitched in a bit of cash from their pension to buy a cheap set and now they play almost constantly. “It was wife and children that urged me to go out and play xiangqi. They reckon that everyone after retirement gets lazy and lethargic,” he says. “I couldn’t agree with them more. Spending my spare time here to avoid disturbing my wife, that’s how you kill two birds with one stone.”

A group of the men are bowed over a chessboard fully laid on the ground, the hunched figures reminiscent of pilgrims paying homage to the xianqi god who reigns not too far away. Day by day, xiangqi has been adapted into their lifestyles, even in their postures, without them even noticing. These men seem to live for the game alone.

“Xiangqi and people are inseparably unified. Without people, chess pieces are just dead objects. Without xiangqi, people will wither. The game is where people release their true nature,” Tu says, suddenly enjoying his role as chess philosopher. “I know a guy who is always look so gentle, but when I play against him, every his single one of his moves contains rage and just wants to eat me alive as fast as he can.”

I am glad for Tu’s words, for his taking the time to speak with me: a young journalist, an interloper watching this most passionate of games. Most people I try to speak to seem too transfixed on the game to want to talk. “You’re lucky. If you go to the neighboring park where they play for money, you definitely won’t have a chance to get an interview there. Those guys are scary,” Tu says.

Every day from noon till dust, these Hanoi chessmen gleefully assemble along this narrow cul-de-sac to provoke, scream, shout, laugh, banter and, of course, play the game that means so much to them. I hope to return someday soon,, and to feel their rough, sincere welcome again–perhaps to even play a game myself.

NEST.: a new way to find a home in Hanoi