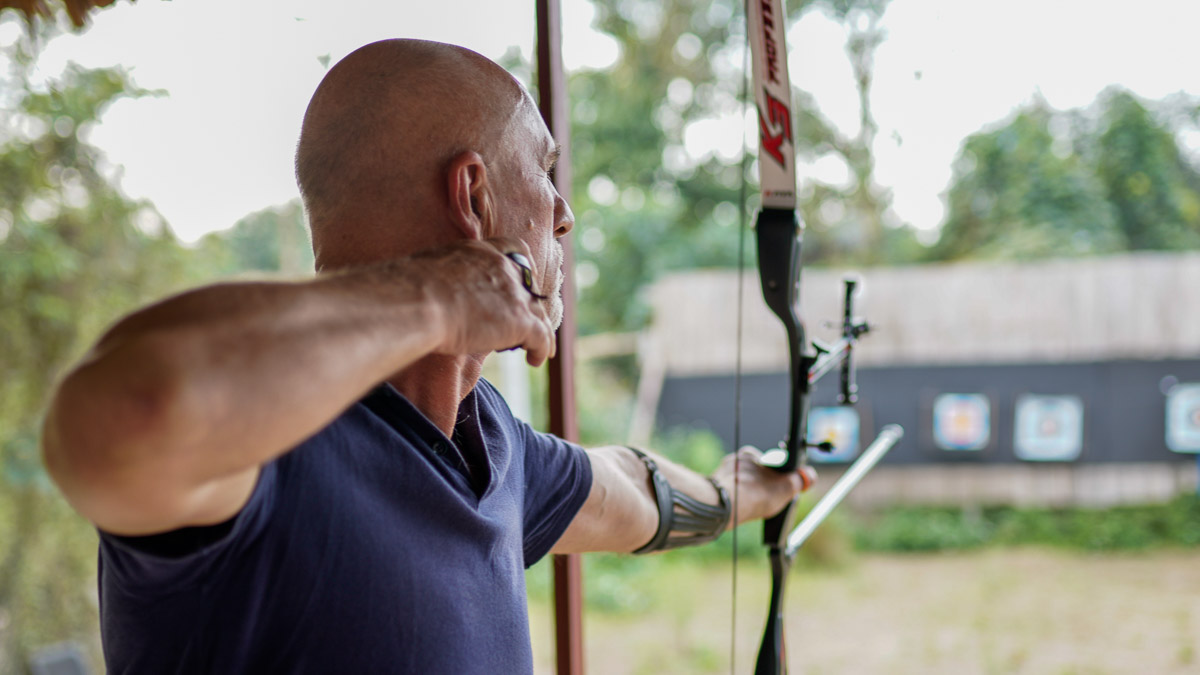 Tucked away down the winding back alleys of Long Bien, the whizzing sound of arrows can be heard as archers take aim, breathe and release the bow’s string. This is not a re-telling of medieval stories: this is Five Arrows Archery Club. This mystical hobby combines finesse, accuracy and, as one club member remarks, “a deep meditative state.” Archery, once used in ancient battle, has since become an elegant sport practiced among amateurs and Olympic athletes alike. Two such athletes, Do Thi Anh Nguyet and Nguyen Hoang Phi Vu, recently became the first Vietnamese archers to qualify for the Tokyo Olympics this summer.

Archery has its place in Asian military history; the famous Han general Ma Yuan wrote to emperor Guangwu: “In the conquest I brought over 10,000 Lac Viet troops, of which 2,000 were veterans, with strong bows and sharp arrows, within a few volleys, arrows loosed like a rain, anyone who was hit, met with certain death.” Warriors clad in bronze armor marching forth gripping their powerful bows, ready for battle – a very different image to that of athletes competing in Olympic archery today. Despite being stripped of its military status, walking into Five Arrows Archery club it looks like something out of Robin Hood – except, of course, much safer.

“Many people are afraid that the bow string will bounce back to your face when you shoot, but it does not” says Five Arrows Manager Le Hoang, the sound of arrows slicing through the air on the range behind him. “Five years ago there was only one case when a national archery player shot his hand, but that was because he was careless and the bow was old.”

Archery is a national sport in Korea, but in Vietnam it not as widespread. This is due to bows being considered weapons by the government. But don’t worry, the police have come and inspected the club and “declared it safe.” Hoang points at the high walls, which are heavily insulated. Hoang has been with Five Arrows club since its inception and has been practicing archery for five months, though he has known of the sport since he was a child.  “I’m an ‘accurate’ person, so I think this sport is just right for me” he says as he closes one eye in a gesture of aiming.

The club has 10 official members, eight locals and two foreigners. However, they often get some tourists and locals to come and try the sport for the day. They teach beginners and intermediate archers and allow for advanced archers to enjoy access to the range and practice on their own. Ralf, a German expat who’s been living in Vietnam for 16 years and practicing archery for 10, comes two or three times a week. “I live just over there” he says, pointing behind the tall gate towards the alley. “So it is very convenient for me to come here. I thought ‘I need a hobby,’ because I am always reading and researching. I like to work with my hands, so I thought archery would be great.”

The owner Vo Quoc Thang takes me to the range to show me how to properly shoot the bow. He says you must have good posture, bring the arrow back with a straight elbow and press your hand gently against your face. Aiming carefully, he says you must let the string go with a breath and presto, bulls-eye! Well, at least the arrow got somewhere on the target – it takes a great deal more training then one afternoon to be able to shoot with exact precision. Thang excitedly shows me the Olympic bow they have that can shoot up to 300 km per hour. I try pulling the string back, but it is much too heavy– beginners start at lower bow weights and work their way up, though most will not make it to an Olympic bow.

Thang and Hoang are thrilled to invite any archery enthusiasts, beginners or otherwise, to come and enjoy the range. It costs 80,000 VND for the first hour and 20,000 for every hour after that. Invoke your inner Katniss Evergreen or Robin Hood and come to the range to learn the ancient art of archery.

Related Topics:ArcheryFeaturedHobbiesLong Bien
Up Next