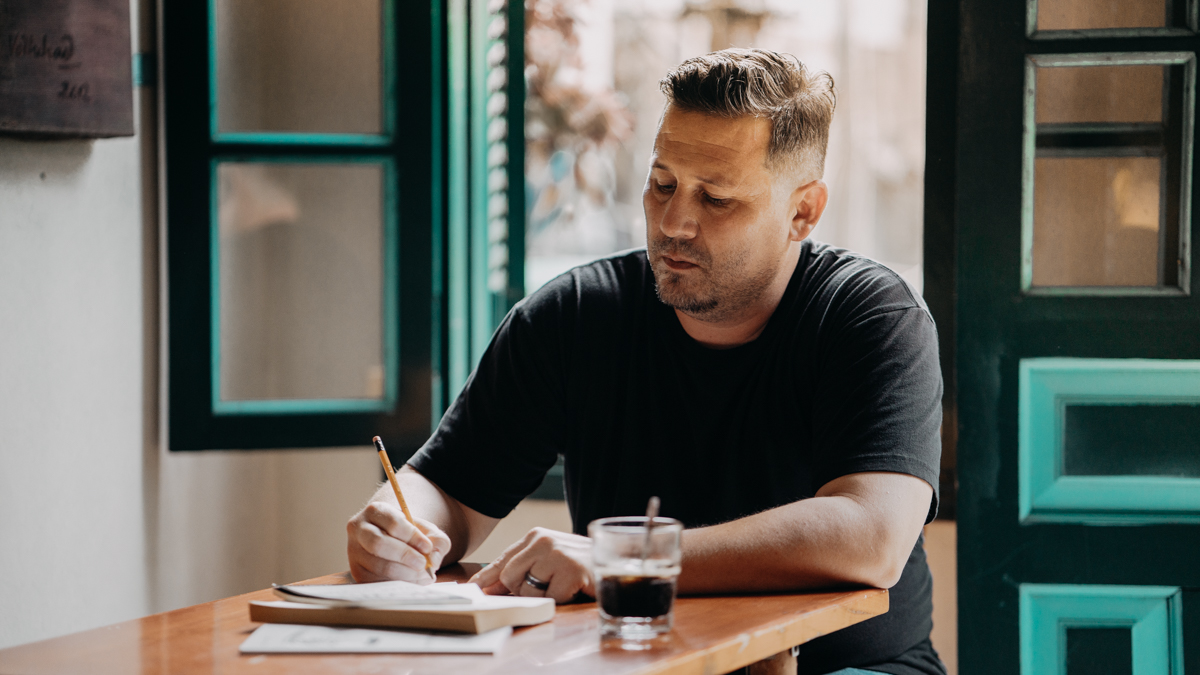 “I’ve been in Hanoi on an extended honeymoon for about eight years now,” Ed Wade says, obscuring his wry smile with a glass of whisky. The American poet shifts through a pile of papers, showing works from both Vietnamese and expat writers.  When not teaching at RMIT University or protecting his young daughter from the perilous traffic of Xuan Dieu, Wade can be found people-watching in tiny cafes, notebook in hand, waiting for Hanoi to imbue him with inspiration once again.

The author of “The Mise en Abyme Jokebook,” Wade captures the fevered beauty of the capital city with contrasting imagery, biting absurdity and his personal “smartass tendencies.”

The thought of Vietnam has enticed Wade for years, primarily from his father – an American veteran. “He told me Vietnam was a great place if you didn’t have to carry a rifle,” Wade says. “That stuck with me.” Trading the dry heat of Arizona for the mugginess of Hanoi, the poet is enjoying what has become a lengthy respite from the United States.

“With everything going on back home, I’m so happy to be away from it all,” Wade says, himself a child of a Mexican immigrant. “Being in Hanoi has given me a different perspective of the U.S. In some ways, I feel more free.”

Often overlooked in depictions of Vietnam, Wade makes the young gangsters the focal point in his poem “Hanoi (Ode to the Trẻ Trâu).”

Hanoi’s artistic freedoms and alternative perspective has sharpened Wade’s poetic wit, aiming to not only reveal the horrors of the world, but to pacify them with laughter. His poem “Despot Haircut” excellently demonstrates this when framed around Trump and Jong-Un’s historic peace talks held in Hanoi. Inspired by a local barber giving free haircuts in the style of the two infamous leaders, the poem points out disturbing similarities between both regimes:

Give me a haircut called the Deity/
But leave a little up top, just enough/
To accentuate my virility/
…
Keep the sides high & tight/
Enough to suggest nothing less/
Than the common touch
Taper it, so the poor feel rich/
And the rich feel the middle class/
Nipping from below

While many assume emotion is the poet’s chief concern, Wade is more focus in providing detailed images, prompting readers to become aware of their own feelings. Fortunately for Wade, Hanoi offers a lot of poetic imagery, ranging from the sweet to the grimy.

“One of my favorite memories in Hanoi is at Westlake,” Wade says. He retells of a young couple taking pictures by the waterfront. The girlfriend focused on posing as the boyfriend focused on her, snapping photos as her dress fluttered in the evening breeze. Meanwhile, they are unaware of an old man vomiting over the lakeside fence. For Wade, this moment perfectly captures the strange duality of Vietnam’s capital. Hanoi as a subject allows for Wade to write about beauty, ugliness, and how the two things sometimes overlap.

“At any given moment [in Hanoi], you can see, hear, or smell something that charms or offends you,” he says.

In “Broken Vietnamese,” Wade depicts a quiet breakfast of pho interrupted by a group of prostitutes on the side of the road; and a young man crashing his motorbike:

…a switchblade pimp/
tattooed from his fingerprints/
to his neck wrecks his bike/
and spills his three girls/
…
They land like dropped crayons/
with heels as long as chopsticks/
pointing in every direction/
…
I think of how I’d ask/
‘Discount for leaking girl?’/
in my broken Vietnamese

The snark generously peppered into his work is reminiscent of late silver-tongued chef, Anthony Bourdain. The acclaimed writer is another major source of inspiration for Wade. Bourdain’s passions for Southeast Asia heavily influenced Wade’s decision to move to Vietnam. After his death in 2018, Wade eulogized Bourdain in a poem entitled, “Instead.”

Instead of being
there, he missed/
dinner/
…
something unusual/
for him/
…
Instead, he walked/
the plaza, his head/
…
stamped with a date like a carton of yogurt/
announcing its expiration…

Wade’s style invokes Bourdain’s sweet-and-sour blend of cynical sobriety and gentle authenticity. Despite the cheekiness in his poem, Wade has great respect for Bourdain: “He’s one of those people who are so genuine in his craft,” he says. “He gives you a whole new perspective on worldliness.”  Forever a fan of Bourdain, the poet continues the traveling chef’s tradition of using bold, flavorful words, sharpened by a smartass’s wit and charm.

Wade’s smartassness is the driving momentum throughout his poetry. As a teacher, he understands that being a bit unruly translates to being unafraid to question the world around you.

“You can’t be a smartass and disengaged. If you are a smartass, you know how to react and get a reaction,” he says, signaling for another whisky. “A smartass is never disengaged.”

Perhaps this is why in his poem venerating Hanoi, he focuses on one peculiarly unruly group- trẻ trâu, the “young buffalo.” The cute name is given to the young, roguish teenagers familiar with Vietnam’s gang culture. Often overlooked in depictions of Vietnam, Wade makes the young gangsters the focal point in his poem “Hanoi (Ode to the Trẻ Trâu).”

Fiery as the dog on the spit. Fierce as the scorpions in/
the rice wine. Venomous as the cobras in/
the rượu/
Heads shaved/
Wrecking motorbikes atop wrecked motorbikes/
Tattooing antiquity on their foreheads/
Building, breaking, rebuilding…

As a father to a young girl, Wade has little in common with the wild freedoms of the young buffalo. However, his fascination with the smartass lifestyle grants him metaphorical affinity with the teenage rebels. By depicting Hanoi through the trẻ trâu, he paints a new picture of Hanoi, one only seen by himself and his fellow Hanoians. Instead of waxing on about the pain of Hanoi’s past, he instead crafts a much, more modern portrait of Vietnam’s capital, capturing the thrills, ghosts, and beautiful chaos of the ancient city.

Wade’s newest collection of poetry, “The Mise en Abyme Jokebook,” is now available from the publisher or at the Bookworm.