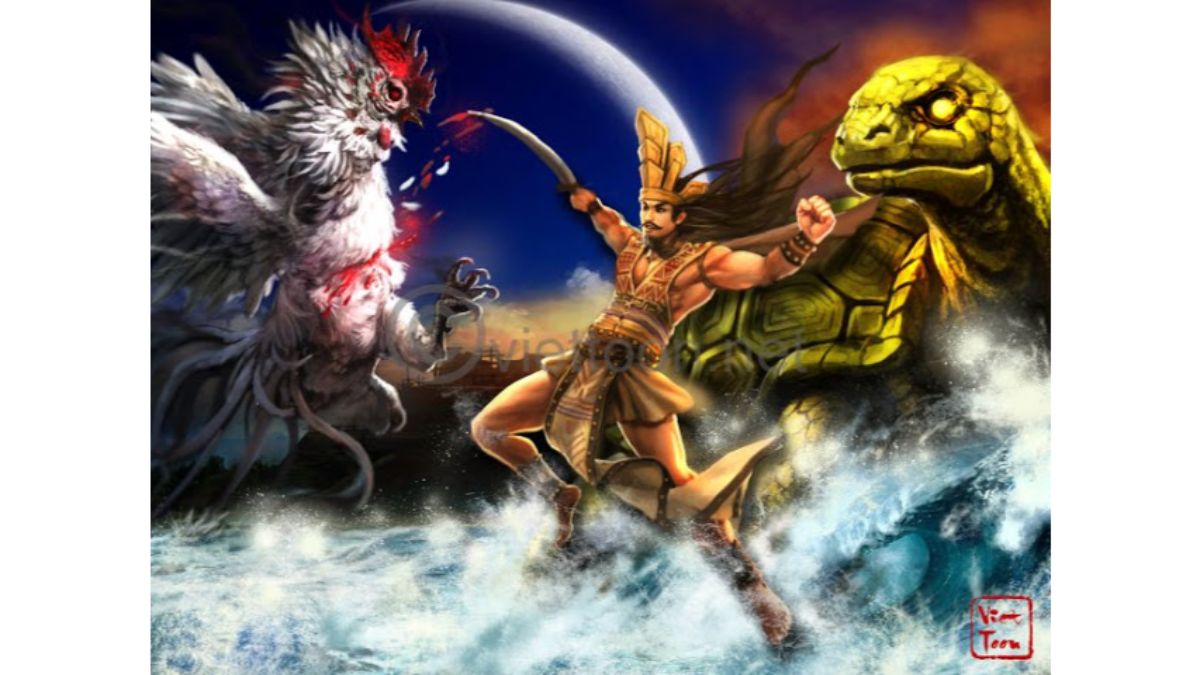 Heading west out of town, and indeed out of Tay Ho, one either turns north across the Nhat Tan bridge, or if you continue towards Thang Long bridge, the Au Co road turns into An Duong Vuong.

This rather unremarkable stretch of suburban dual carriageway that runs parallel to the Red River, is actually named after the very first King of Vietnam –  An Duong Vuong (257–179 BC).

His epic tale defines the early history of Vietnam. He was originally the leader of the Au Viet tribe, who defeated and seized the throne from the last Hung King and united with their people, the Lac Viet. This is the classical story of a King, his magic crossbow and a turtle’s claw.

After assembling his army and following the subsequent defeat of the Hung King in 207 BC, An Duong Vuong proclaimed himself as the new King of the united peoples. He established a fresh capital and built a fortress (Co Loa Citadel) on raised ground to the north of the Red River, in today’s Dong Anh district (about 16 km northeast of Hanoi’s centre).

This was the era that saw, far to the north, Qin Shi Huang constructing the Great Wall of China – at the same time as An Duong Vuong built a spiral fortress in Co Loa to defend his state against invasions. It is written that the new King viewed this region as one of strategic and geographical importance, being surrounded by impenetrable mountains and forests, with the mighty Red River close by. However, it is not known exactly why An Duong Vuong favoured the spiral, shell-like shape of this citadel – it was said the construction was extremely tough and difficult to construct. Legend has it that each time the end of the construction was near, hordes of evil spirits would undo the builder’s important work at night.

The Legend of the Magic Crossbow

Incense was burnt, prayers were said and offerings were made by An Duong Vuong to evoke the gods to assist him. In a dream, one night, a frail old man with long white hair came to An Duong Vuong to inform him that the only person who could help him build his citadel was a local golden turtle.

Not so many days after and lo-and-behold whilst sitting in his boat on the river, a giant golden turtle suddenly emerges. The turtle speaks to An Duong Vuong and tells the King that he will need one of the turtle’s claws to be able to finish his plan. Promptly pulling out a claw, the turtle throws it to the King and then suddenly disappears.

An Duong Vuong gave the claw to his weapons engineer who built a crossbow which incorporated the prized piece. The legendary device was said to fire a thousand arrows at once.

The claw also brought good fortune and at last, the King’s capital took shape and soon prospered, so much so that is was coveted by their neighbours.

A jealous local General named Trieu Da, one who had refused to surrender under the newly established dynasty, invaded and attacked on numerous occasions over the following decade. Nonetheless, he failed each time due to An Duong Vuong’s military skill, defensive tactics and of course- his magic crossbow.

Following numerous defeats, the General devised a new approach and negotiated peace with An Duong Vuong.  In his determination to discover the secrets and strategies of his long-term enemy, he offered his son (Trung Thuy) for marriage as part of his cunning plan. And indeed, there was a marriage to An Duong’s Vuong’s daughter (Princess Mỵ Chau).

Over time, via his new daughter-in-law, he discovered An Duong Vuong’s secret weapon – the magic crossbow. The next stage of his plan was to get his son to sneak into the King’s palace and replace the magic crossbow with a fake.

With the magic crossbow in his hands, General Trieu Da launched an immediate attack on his old foe and in-law.

The fortress of Co Loa fell and An Duong Vuong fled the scene of the battle with his only daughter, My Chau. He rode to the river where he once again encountered the golden turtle.

The turtle shouted “The enemy is right behind you!” And at that moment he knew it was My Chau who had shown him how to use the magic crossbow.

In a rage at his own daughter’s betrayal, he slew My Chau and jumped into the river with the giant turtle. In some accounts of this story, it is said that she was beheaded by her father.

The first to arrive at the scene was the General’s son, Trong Thuy, in search of his beloved wife. The Princess is said to have left a trail of goose feathers, for her adored husband to follow. He sees her dead body lying in a pool of blood; her father nowhere to be seen. Legend tells of how My Chau’s blood flowed into the river, washed out to sea and formed the pink pearls that can be found on the North Vietnamese coast.

To ensure being with his wife in eternity forevermore and observing conjugal fidelity and devotion, Trong Thuy promptly draws his sword – and kills himself.

So next time you are on your way to the airport, or perhaps pootling along under the Nhat Tan bridge out west, remember these mighty tales and tragic love stories. Perhaps consider the early legends of King An Duong Vuong, or the heart-breaking fable of Princess My Chau and Trong Thuy. On the other side of the bridge lies the dragon Lord Lac Long Quan and his fairy wife -Au Co; look around you and what today may be a dusty old track or a little tea stall, in Vietnamese history, was a completely different story.