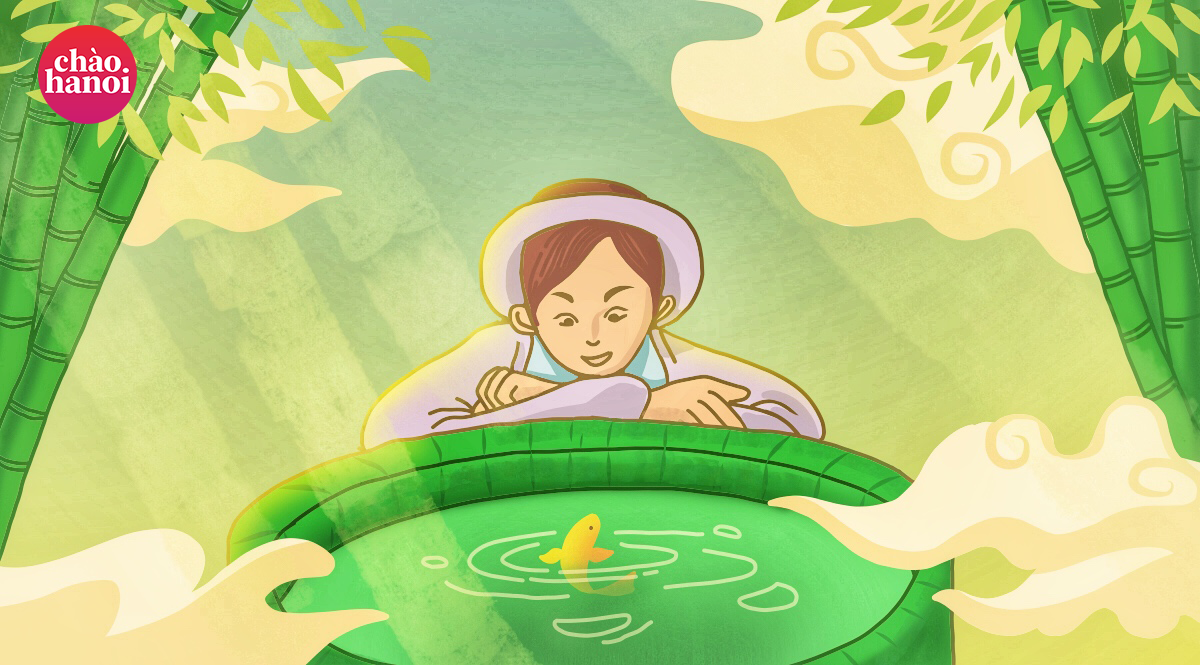 The western Cinderella story, in modern retellings at least, sees the young girl stay pure and innocent until the end. Here in Vietnam, ours is darker–more vengeful.

The tale of Tam and Cam touches on sadism, tyranny, reincarnation, magic and murder, even cannibalism. And while it is one of the most popular folktales in Vietnamese literature, familiar to most since childhood, it remains controversial for its gruesome details and ambiguous moral lessons. Let’s take a look at this gruesome, and twisted children’s story.

One day long ago, not too far away, a beautiful Vietnamese girl called Tam sees her mother die. When her father remarries, poor Tam is forced to live with her wicked stepmother and her daughter Cam, who are endlessly cruel to her. While Cam lazes around and enjoys herself, Tam has to stay home, treated like a slave.

One day, the stepmother tells the two sisters go and catch some shrimps for dinner, promising a gorgeous red bodice to whoever collects the most. Both the girls excitedly head to a nearby pond. A hardworking girl, Tam quickly fills her basket with shrimps, while Cam opting to rest instead, soon finds her basket almost empty. As the sun is setting Cam, fearful of being scolded by her mother, tricks Tam, stealing her shrimps and running home with them.

When Tam returns, she realizes her once full basket is empty. Confused and frustrated, she starts to cry when a strange pixie appears. Hearing her story, the kindly pixie gifts Tam a small yellow fish–a goby- so she no longer needs feel sad and alone, which only appears when she speaks out a special poem.

“O goby, o goby
Go up and eat my golden and silver rice
Don’t eat this spoiled rice and porridge of theirs.”

Delighted, Tam takes the little fish home and puts it a garden well. Every day, she saves a small portion of rice for the little fish and they become fine friends. Soon, the vicious stepmother notices Tam’s strange behavior and has Cam spy on the girl. On learning of the fish, mother and daughter set about devising a cruel plan to spite the young girl. They tell Tam she must graze the family buffalo far away, and to leave her coat behind.

Once Tam leaves, the two swiftly put on the coat, head to the well to recite the poem. When the fish hears the familiar words, it swims to the surface only to be caught, gutted and eaten by the devious women, who leave nothing but the bones behind.

On Tam’s return, she heads to the well after dinner but her fish does not appear and the girl bursts into tears. Suddenly, the pixie appears. He tells her what has happened but not to worry, and to bury the fish bones in four jars under the corners of her bed.

Several days later, the entire land is excited as the king hosts a festival. Everyone is looking forward to the lavish event, including the stepmother and Cam. Seeing that Tam also wants to attend, the stepmother sets her an impossible task: separate the mixed up rice and bran, grain by grain. Tam has no chance and is left home alone.

She, once more, starts to cry when the pixie magically appears. Hearing her story he summons a flock of sparrows to help her separate the grains. He then tells her to dig up the four jars of fish bones. To her surprise, the bones are no longer in the jar; instead she finds pair of a beautiful pair of shoes, a bodice, a scarf and silk clothing. She also sees a tiny horse, which turns into a real horse, and finds a saddle for the horse in the last jar.

Tam then merrily heads out to the festival but accidentally loses one of her shoes on the way (sound familiar?). Coincidentally the King, taking the same route as Tam, finds the shoe and decides it is a slipper so fine that it can only be worn by the most beautiful woman in the kingdom. Spurious logic, but this is a fairytale.

At the festival, the King has every woman try on the shoe but it fits no one. When Tam sees her shoe she immediately tries it and it fits. The King, as one does,  instantly realizes Tam is the woman he has been looking for his whole life and proposes to her. Can and her mother can only look on in jealousy. After marrying the King,  Tam lives happily ever after in the palace.

Even as Queen, Tam doesn’t forget her roots. On the anniversary of her father’s death she returns home to visit her ‘family.’ But Cam And her mother are sickened that Tam is now Queen, they cook up a cruel scheme to harm her.

The stepmother tells Tam to climb a palm tree to collect fruit for her father’s ceremony. While Tam is picking the fruit, her stepmother chops down the tree, and Tam falls to her death, and the stepmother cries with laughter.

Every time she returns home, her chores have been done, along with a meal waiting for her. Suspicious, the crone sets out to reveal the mysterious helper.

Still unsatisfied, Cam and her mother dig up Tam’s body(!) to take off her clothes and give them to Cam. They then head to the palace and tell the King that Tam has died in a tragic accident and that he should marry Cam to replace her. Despite having a new wife, the King ignores her, missing Tam desperately,

However, Tam has been reincarnated into a bird, an oriole and flies to see the King. When he hears the beautiful songbird, the King is reminded of Tam, and says: “O oriole, if you are my wife, enter my sleeve.” The bird does so, and the King becomes cheerful again, and is never seen without the oriole, even ordering a golden cage for the bird. One time, the bird sees that Cam is not washing the King’s clothes properly and threatens to “scratch her face.”

Seeing the King so infatuated with the bird, the enraged Cam hatched a murder plan with her mother and promptly cook up the bird while the King is away, burying the feathers in the royal garden.

But soon, two peach trees grow where the feathers were buried, and the King sees this is a sign from Tam, and tells his men to make a hammock to be hung between the trees. Every now and then, the king rests there, lying under the trees’ shade.

At this point, Cam is fueled with envy, determined to wipe out all traces of Tam no matter what. She chops down the trees, fooling the king into believing she was weaving clothes for him. Yet while weaving, Cam hears voices and dangerous threats coming from the loom. Panicked, she runs to her mother again, who tells her to burn the loom and scatter the ashes far from the palace. Cam returns to the palace after doing so, thinking that she will be free from guilt.

Little does she know, a golden apple tree (yes, another tree) with radiant green leaves grows from the ashes. It looks magnificent, and strangely just one fruit grows from it, exuding an enticing scent.

One day, an old crone walks by and, enchanted by the scent, says to the fruit:

“O golden Apple, fall to my basket
Your scent I’ll smell, eat you I’ll not”

The fruit immediately drops into her basket. The old lady keeps her word, and uses the fruit as a decoration, never touching it. But every time she returns home, her chores have been done, along with a meal waiting for her. Suspicious, the crone sets out to reveal the mysterious helper.

Pretending to leave home, she hides in a corner. To her surprise, a beautiful woman, Tam, walks out of the fruit. The crone rushes back into her house, tearing apart the remainder of the  fruit so the girl stays with her. From then on Tam lives happily with the old lady, like mother and daughter.

The crone owns a small resting stop, and one day the King stops to stay. On seeing some elegantly prepared betel leaves that remind of his former wife, he demands to see who made them. Alas, it is his beloved late Queen, Tam, he becomes overjoyed and has her brought back to the palace to be Queen again.

Cam trembles with fear at the seemingly impossible return of her stepsister but tries to keep it cool, attempting to befriend her instead. But Tam knows better. She acts coy at first, then tricks Cam into jumping in a hole, which she then fill with hot water. Boiled through and through, Cam meets her demise. But this punishment is still not enough for Tam. She gifted the stepmother fish sauce, but instead of anchovies, it is Cam’s…corpse that is fermented for that distinct umami taste of revenge.

The stepmother accepts the gift, thinking it is from her own daughter. While enjoying a meal with the sauce, a crow flies by, chanting:

“Delicious! The mother is eating her own daughter’s flesh! Is there any left? Give me some. Give me some!”

The woman shoos the crow away, but continues to eat the sauce day by day. Only when the sauce is almost finished does she discovers her daughter’s rotting skull underneath. Realizing that she’s been devouring her own daughter along, she dies in fright.

And that, dear reader, is that–a truly grim fairytale. But what is the moral of this peculiar story? Usually folktales teach us to be kind and nice, and that good things will come. But is real life always that simple? Tam is treated in the most loathsome fashion so many times she cannot maintain her demur nature once she sees the true color of her enemies. Perhaps, it is only fair that she takes the matter into her own hands and lets the punishment fit the crime.