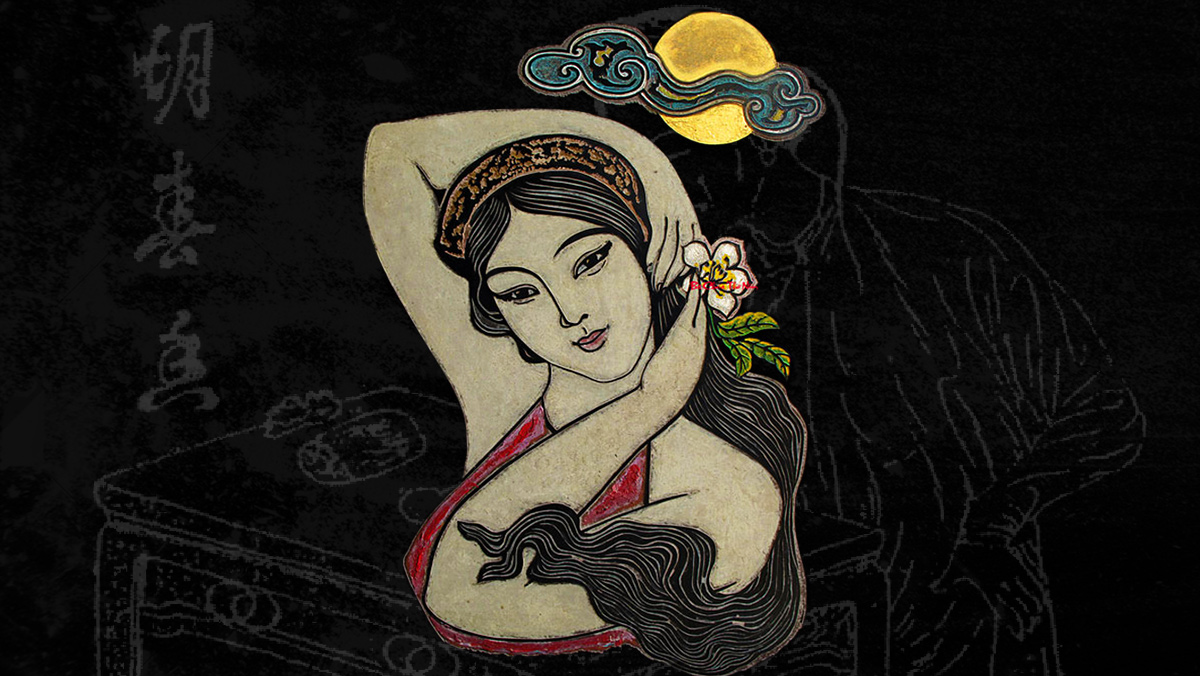 There are few in Vietnam who have not heard her name: Ho Xuan Huong (1772-1882), an elegant, much-famed, risqué poetess, her verse replete with nods, winks and sexual innuendo, shocking to many at the time. As far as the late 18th century goes, she was something of an anomaly and often caused a scene with her outspoken views and racy lines, which were enough to make a grown man blush several times over.

Though not much is certain about her personal background, it’s generally affirmed that she lived for 50 years against the violent backdrop of the Tay Son uprising under the still-heavy influence of a very Confucian society. Her name – Xuan Huong – literally translates to ‘Scent of Springtime,’ and like many other revered artists in history, the turmoil of her time only served to enrich and inspire her body of work.

Most of her poems were written in Nôm script, a complex, hugely extensive and difficult Vietnamese adaptation of Chinese characters, largely in use from the 15th-19th century before it was replaced with Quốc Ngữ – the national Latin-script based alphabet we know today. Through her collection of 40 Nôm poems, Ho Xuan Huong helped elevate the status of Vietnamese poetry, so much so that a century later, she was adoringly given the title ‘Queen of Nôm poetry’ by Xuan Dieu, one of Vietnam’s greatest romantic poets.

She is admired for her masterful ability to play with double entendre, often finding new ways to sexualize seemingly inanimate, soulless everyday objects or mundane creatures, such as a jackfruit, a snail, or a hand fan. Her poem “Ode to a Paper Fan” is clearly alluding to something more than a mere fan, with its less-than-subtle suggestions of post-coital relaxation:

One ring deep enough for any rod/
You’ve been alluring from way back when/
…
Your job is to cool down sweating heroes/
And cover the gentleman’s head in case it rains/
Behind the bed-curtain, tenderly, let’s ask him/
Panting, panting in this heat, are you satisfied?

“The Jackfruit” is perhaps even more sexually suggestive. On the surface it could just be about getting your hands sticky while eating fruit, but the fruit’s milky sap is clearly a metaphor for something entirely different.

My body is like a jackfruit swinging on a tree/
My skin is rough, my pulp is thick/
Dear Prince, if you want me then pierce me upon your stick/
Don’t squeeze, I’ll ooze and stain your hands

By today’s standards, she may merely seem like a woman who enjoyed her poetry a little filthier than most, but for a woman to not only be so frank about sex but also about female pleasure was sexually liberating at a time when chastity and purity among women were put on a pedestal.

Many have looked down upon the poet, debasing her lyrical style as crude and unseemly for a woman. But make no mistake, it was not just for shock value; this was a deliberate act of defiance against the oppressive social norms of her times.

“Screw the fate that makes you share a man. You slave like the maid, but without pay.”

It was not just the graphic detail that gained her a cult following, which remains to this day (though it definitely helped), but also her social commentary on taboo topics. She touched on issues of extramarital affairs or, more specifically, the children that were born from them, as in “An Unplanned Pregnancy”:

My giving in yielded this mess/
Don’t you realize my anguish?/
…
This love-load I’ll be lugging/
Whatever the world’s opinions/
To have child, without husband/
Is a very nice feat

Ho Xuan Huong wrote in a time when women were supposed to be slavishly obedient, as per the Confucian Threefold Obedience: “Obey the father before the marriage, obey the husband after marriage, obey the first son after husband’s death.”

Thus, she became a voice for women’s unspoken disillusionment in married life, which she experienced first-hand through her own marriages with the officials Vinh Tuong and Tong Coc, the latter whom she goaded as Mr. Toad in a mock eulogy sent to him after their separation. She was a concubine, or wife, of secondary rank to both husbands, a position that she hated fervently, which she made abundantly clear: “Screw the fate that makes you share a man. You slave like the maid, but without pay.”

One of her most meaningful romantic connections was early in her life, with Nguyen Du, author of Vietnam’s most recognized piece of literature “Tale of Kieu.” Rumor has it that she was 17 and he 24 when the sparks flew, and they became deeply attracted to each other’s artistic souls. Throughout their three-year relationship, both poets wrote several poems dedicated to one another, and it is unlikely to be a coincidence that the two Hanoi streets named them today intersect at one point, much like the two artists who briefly crossed paths during their lives. The country’s street-planners must have a touch for romance, as it is not the only intersection in Hanoi that makes a nod to famed Vietnamese lovers.

To the surprise of many, behind the head-turning stanzas, Ho Xuan Huong still upholds certain traditional values of Vietnamese womanhood, such as faithfulness in love. She was a romantic at heart, and it is these contrasting aspects of her personality that have led people to refer to her poetry as “pure yet vulgar” (Thanh thanh tục tục). Her most famous work – “The cake that drifts in water” – effectively embodies Ho Xuan Huong’s style:

My body is both white and round/
In water I may sink or swim/
The hand the kneads me may be rough/
But I still shall keep my true-red heart.

Simple and elegant, not to mention one of her least explicit works, it is these qualities that see the poem is officially taught to every child in the country in the Grade 7. In 2016, the verse was reimagined through singer Hoang Thuy Linh’s melodic modern take on the poem. Interestingly, the music video helped Hoang secure her place in the pop music industry as a true artist, after she had been the victim of a very public scandal involving revenge porn in her teens. It would not be too much of a reach to say this female singer was empowered by the legendary poet through the fighting spirit of the lines—after all, both suffered much judgement and criticism from those willing to bring them down. Ultimately both women know their integrity is intact and have reclaimed agency as women of their own rights.

[People of Hanoi] The wooden-stamp maker