Soc and Vong: Vietnam's special time of the month 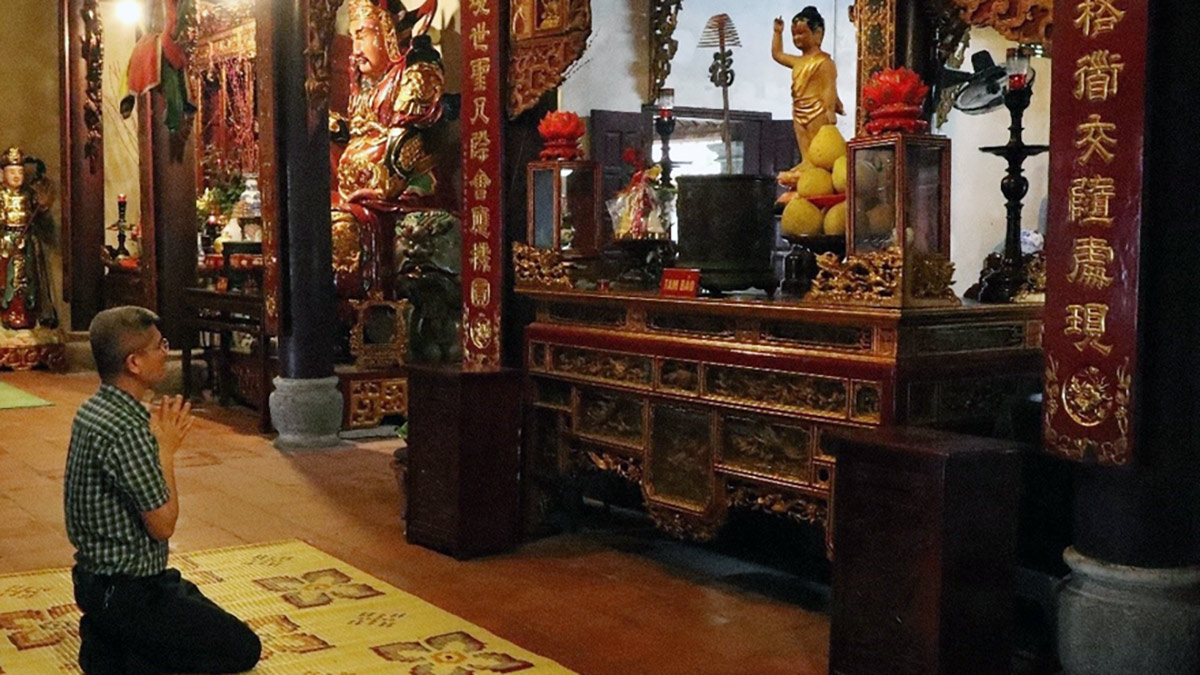 It is 6 am Thursday in downtown Hanoi and the Lang Cot market is already crowded and noisy with chatter and people haggling on what is an auspicious day. They are bargaining for the most fragrant flowers and freshest fruit to prepare for offerings at the local temple, or perhaps an altar at home, to ready for the first day of the lunar month. The first and 15th days of the lunar month are part of an important tradition in Vietnam. Originally rooted in Buddhist practice, the lunar cycle has a cultural significance that is deeply ingrained in the minds of millions across the country, religious or not.

In Buddhist scripture, the first day of the lunar month is known as Soc (beginning), while the middle of the month is Vong (looking ahead). Vong signifies the full moon, so one must look forward to see the moon. Throughout Vietnam people assiduously celebrate these two days, although the way they mark it can differ significantly.

Thu Hang, a 53-year-old woman who sells pho for a living, is a worshipper of Mau (the mother goddesses). Lying at the end of a small alley in Yen Hoa street is her own shrine to Mau. If you visit on one of these days where you can hear the melodious sound of Mokugyo, Tibetan music bowls that resonate alongside chanting to mark the occasion.

“There is no answer for why I must do this. It is an important part of Vietnam’s belief and custom to do so on these two dates, so that we can ask for more peace and tranquility in our daily lives. I have not studied the origins of the tradition, so the rituals might vary but what I perform is only for Mau worship,” Thu Hang says. “Depending on what they need, people might come and ask for different things, like safe travelling or luck or everything in life goes smoothly. Each religion has their own higher deity, so on these two days they might also seek insight from her or him about what to do next or what will happen if they make a certain choice.”

Such importance is placed on the two days that many temples usually closed to the public will be opened for visitors and Buddhist laymen, such as at Ha Yen Quyet Pagoda in Cau Giay District. This is usually a time of the month for Buddhists (and others) in Vietnam to assemble and devote their time to spiritual pursuits and enlightenment. It is also a moment to remind themselves of their actions, of virtue and compassion to other creatures, of mercy and goodness to overwhelm ant potential evil paths. The coronavirus outbreak had effectively postponed many official religious gatherings and lectures throughout the country until recently, but as Vietnam eases its social distancing measures, devotees are now starting to visit temples to mediates, pray and give thanks.

“I think what we do on these two days is about deep honor and respect for our tradition and spiritual order, whether you believe in it or not.”

Holding a handful of small change to place in each saint’s own altar and wearing a shining blue Buddha sculpture on his neck, Nguyen Anh Dung, a middle-aged moto-taxi driver, is a regular visitor to the pagoda. “I often spend much of my time here on those two days sincerely praying and offering all the things that I have. After that, when I resume my work I feel more peaceful within my own consciousness,” he says.

It is said that with the new moon and full moon during Soc and Vong, people tend to be more aggressive, paranoid and distracted. As the moon’s phases affect the ocean waves, they are also believed to possess the power to disturb our bodies, which are mostly liquid after all. Some believe that during the first and 15th of each lunar month, Buddhist deities from above look down to save and liberate living creatures from the cessation of suffering. This acts as a reminder for people to show their mercy to other beings, to live with mindfulness and try eliminating greed as well as other sins from man’s world.

“It is actually more of the beliefs and traditions from Vietnamese past generation to ask for fortune. Some occasions occurring on these days are more special and busy, such as Lunar New Year’s Eve, Tet Nguyen Tieu (First Full moon festival) or the start and end of summer. Today actually marks the transition of spring to summer, and our pagoda will usually hold rituals and chanting sessions for it,” says Thuan, a monk at Ha Yen Quyet Pagoda. “But because of the virus and also as this lunar year has two Aprils, we decided to move them into next month. Eating vegan is not required, though many choose to do so based on their own will and wish. Some might opt to either go vegan for all their life, or just on spiritual events. Otherwise, there is no rule or restrictions.”

The first and middle of lunar month is also a time for Vietnamese people to reflect and display gratitude for their ancestors. For my mother, this means cleaning our ancestor’s altar and setting a simple fruit tray of mangos, watermelon and Oreo cookies, with two small vases of chrysanthemum and roses. You do not want the offerings and food to be too lavish or else it is believed that you will attract homeless, and wandering souls from outside the street to your house.

We also visit the family’s ancestral hall and give our offerings to the founder of the Doan families in our family. Sometimes, we will come across another member who is praying, so it is effectively one of my relatives, although I may not know them personally. One such person is Nguyet Doan a middle-aged woman, who is at the temple to pay her respects and think about life. She is in philosophical mood when she speaks to Chào.

“I think what we do on these two days is about deep honor and respect for our tradition and spiritual order, whether you believe in it or not,” she says. “We come here to firstly pray for peace in our country and people living in harmony, and secondly for health and happiness for our families. It may or may not come true, but the important thing is that we feel more at ease and relaxed in our own hearts.”

On the surface Vietnam may not necessarily seem that religious as a country, but practice on Soc and Vong throughout the nation shows that it is in fact imbued with a deep spirituality. It gives people throughout the land a chance to focus on the moment, to see in a new start and to look forward. It is a time for all of us to be thankful for what we have and the world around us.