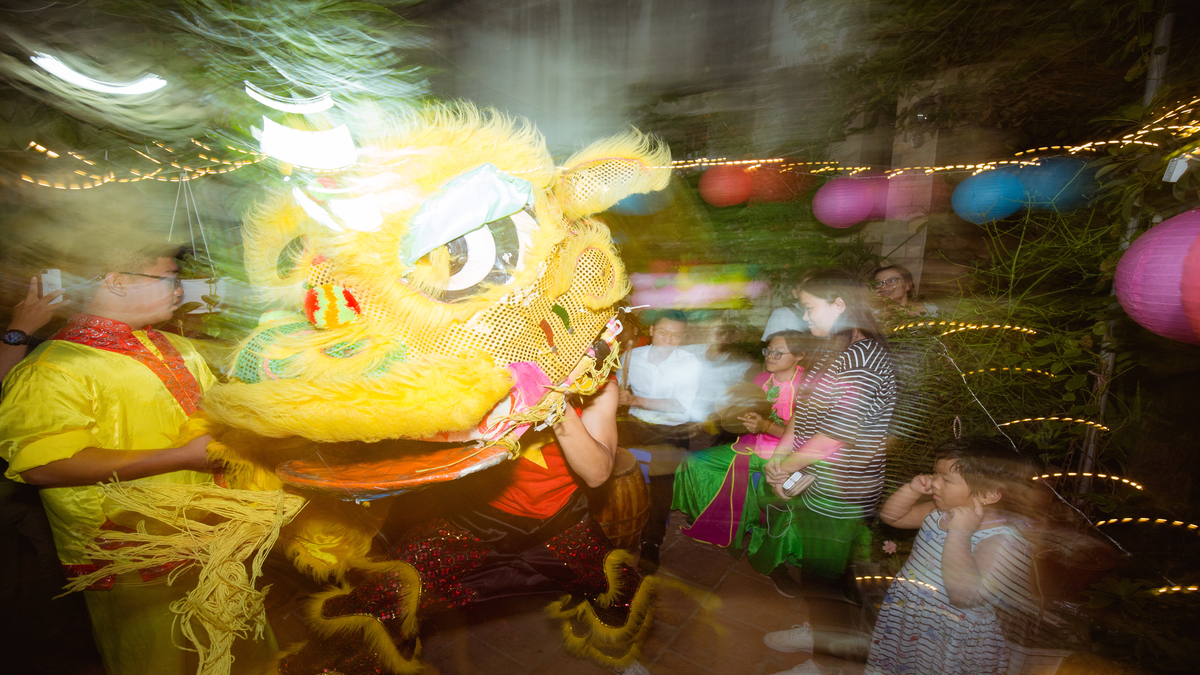 After what felt like an endless summer, Hanoi’s weather is finally, gloriously, changing its tune. Erratic bursts of cloud and rainfall have seen the humidity drop, and we have entered to what many Hanoians consider their favorite season: autumn. Colorful lanterns are hung on the street, young children carry handmade toys and fireworks are set off on one of the nation’s most auspicious times of the year: Trung thu (Mid-Autumn Festival).

More casually known as Moon Festival, Trung thu is the date in the year when the moon is believed to be at its brightest and fullest. Going back about 3,000 years, Trung thu has deeply rooted itself into the heart of Vietnamese culture and tradition: a time to celebrate the dragon who brings the rain, harvests, fertility and, of course, children. Dragon dancers can be seen across the city and moon-cake sellers come out in full force, peddling this traditional snack in a variety of modern patterns and flavors.

“Trung thu is the feast of moon cakes,” says Nguyen Thi Tra My, a 25-year-old mother of two. “We always place moon cakes on the altar of our house to honor our ancestors.” Despite modern twists on the moon cake, there are traditionally two types – banh nuong and banh deo.

Banh nuong (baked cake), with its stiff honey-brown exterior, is said to represent the earth and the sky, whereas snow-white banh deo (doughy cake) is sticky to the teeth and sugary on the tongue, representing the shining full moon. Typically stuffed with anything from green bean, red bean and black sesame to lotus seed and dried pork, the star of the show is invariably the salted duck egg placed in the middle of the cake’s filling.

“I feel like the festival is losing a part of its identity – lanterns are now run with batteries, and all the toys are professionally made and bought from shops. Back in the days, all the toys we had were ones we made ourselves.”

Trung thu sees Dragon Dancing throughout Hanoi, colorful performers dressed as bright yellow dragons in a rich red trim, duck and weave to the constant banging of a noisy drum. The Dragon Dancing usually takes place at nightfall when parents are off from work and families set out onto the streets for fun. Sitting high up on their parents’ shoulders, children are the target of performances, with lanterns waving in their hands and lighting up their eager faces. “When I was little, I would always follow the dragon with a lantern in hand, not knowing where the dragon would go,” Phung Hoai Linh, a 19-year-old college student, says with a smile.

“I actually only take Trung thu seriously when I have kids,” Tra My says. “I’m a person of tradition, and I’d like to pass that on. I think Trung thu is a great time for them to experience the culture of our country. But I feel like the festival is losing a part of its identity – lanterns are now run with batteries, and all the toys are professionally made and bought from shops. Back in the days, all the toys we had were ones we made ourselves.”

Nguyen Quy Hoa, a mother of two grown-up children, is similarly nostalgic when she casts her mind back to her childhood. “I think Trung thu back then was a far lot merrier. When it was only two months away, I and other kids in town were already gathering colored paper to make lanterns,” she says. “We would ask our parents to place a candle – and you have to be really, really spot on – inside the lantern. At night, we would feast under the oil lamps. It was a feast of meaning, because each person contribute more or less of something to the table. But it isn’t merely the food – it’s also the love and connection between people of the town.”

Any Hanoian would agree, feasting is an important part of the festival. Vietnamese refer to the act of feasting as pha co, which means “dismantling the feast.” Pha co is when families, friends and neighbors gather to eat, talk and cheer to drinks as much and as late into the night as possible. As for the children, kids in families and school students are encouraged to create their own animal figures from fruits, candies and other snacks, which they will then “dismantle” and share among themselves later on.

No longer having young children roaming the house, Quy Hoa sounds briefly despondent, as if the magic has been lost for her. “Trung thu is the festival for babies, I suppose. But because there’re no kids in the house now, I usually bring home moon cakes, fruits, and other Viet specialties – just a little something for the home.”

Like many a festival, Mid-Autumn is an opportunity for peddlers and craftsmen to earn some extra cash selling all manner of things. “Trung thu is the day for the middle-class to make money,” Hoai Linh says. “My mom loves the festival, because it’s the day when lots of people stop by her shop to eat chè [a traditional, sweet Vietnamese dessert]. Shops make money mostly off children by selling lanterns, superman masks, toy swords and other sparkly things that catch the littles one’s eyes.”

You can already feel and see it in the air: the vibrance, the noise, the excitement, sellers waving excited children into their stalls, crowds clustering around dancing dragons, and parents feeding their infants slices of moon cakes filled with salted eggs. It’s a special time of year in Hanoi, and indeed the whole of Vietnam. Here at Chào, we wish one and all a wonderful Moon Festival.