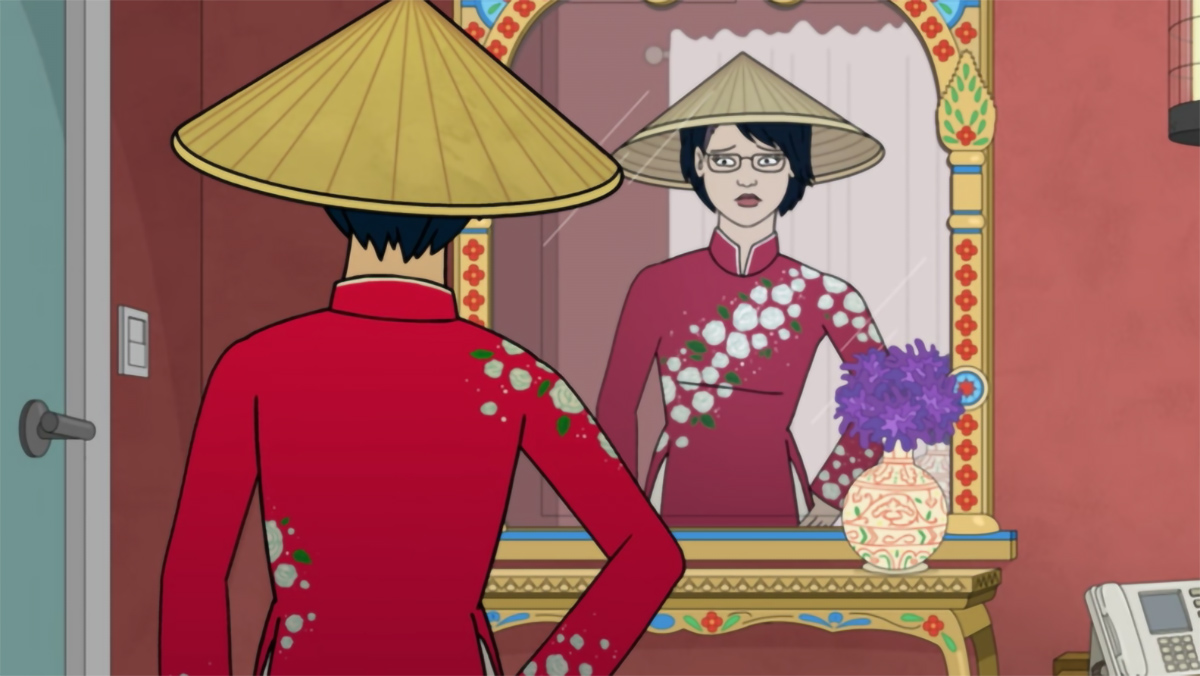 Actress Alison Brie recently issued an apology to Vietnamese audiences: “In hindsight, I wish I didn’t voice the character of Diane Nguyen,” she wrote on her Instagram, referring to her former role as a Vietnamese-American character on the acclaimed animated show “Bojack Horseman.”

“I now understand that people of color should always voice people of color. We missed a great opportunity to represent the Vietnamese-American community accurately and respectfully, and for that I am truly sorry.”

While Brie’s public statement of regret is a step in the right direction, Hollywood’s erasure of Vietnamese women has been an issue spanning decades. Rarely are Vietnamese women given prominent roles in American media and in those few instances where they are, the characters are portrayed by non-Vietnamese actors, are given little agency, or receive intense backlash from fans.

The character is one of the few Vietnamese females in the film, despite over half the movie being set in Vietnam. She exists only to titillate, to be ogled by the American soldiers, again, perpetuating the fetishization of Asian women.

Similarly, in “Good Morning, Vietnam!” the lead Vietnamese female is there to be wooed by the American male protagonist. Although more charming than Kubrick’s portrayal of Vietnamese women, the character’s introduction is problematic. Robin Williams’ Adrian spends his first hour in Vietnam gawking at every woman he passes in Saigon. “There she is again!” exclaims Adrian, in regards to a completely different woman. The film jokes that to the American solider, Vietnamese women are interchangeable. A pretty sick joke, considering the numerous sex crimes committed by the U.S. military during the war.

Most absurdly, the female characters from both films are not even portrayed by Vietnamese actors. The sex worker in “Full Metal Jacket” is played by British-Chinese actress Papillion Soo Soo. Meanwhile, Trinh of “Good Morning, Vietnam!” is played by Chintara Sukapatana, a Thai actress. Not only are Vietnamese women given limited roles in these pictures, they are not given the opportunity to accurately represent themselves or otherwise.

Acclaimed Vietnamese writer Nguyễn Phan Quế Mai has long been frustrated by representations of Asian women in the media, so much so that she has explicitly tried to address these issues in her work. “For too long, Hollywood has used Vietnamese people as the background for American stories. Vietnamese women, therefore, have often been represented as colonized, sexual, powerless and absent of trauma. I fought against this representation via my novel, ‘The Mountains Sing.’” she told Chào.

“In this novel, Vietnamese women get to tell the history of Vietnam, including the Vietnam War, themselves. The women in my novel are inspired the Vietnamese women who are a part of my life – women who had to shoulder the burden of historical events while being the pillars for their families and community. They refuse to be silenced, fight for their rights while enriching the lives of others with their compassion and the spirit of hope.”

Modern Hollywood still struggles to provide dynamic roles for Vietnamese women. Thankfully, for now at least, depicting Vietnamese women as sexual objects has fallen out of fashion. However, the Star Wars franchise and fandom recently demonstrated that Hollywood’s continued intolerance towards Vietnamese women still exists today, as can be seen by the horrific online harassment of actress Kelly Marie Tran.

The Vietnamese-American actress plays Rose Tico, a resistance fighter debuting in “The Last Jedi.” Director Rian Johnson wanted to include a Vietnamese actress, in a nod to creator George Lucas’s original vision, in which the galactic rebels were inspired by the Viet Cong. This nuance was lost on zealous fanboys, who took to bullying the actress online. Plenty of racist and sexist jokes bombarded her social media feed, negatively affecting her mental health.

Tran left social media, explaining her decision to do so in a New York Times op-ed; “It wasn’t their words, it’s that I started to believe them. Their words seemed to confirm what growing up as a woman and a person of color already taught me: that I belonged in margins and spaces, valid only as a minor character in their lives and stories.

“The women in my novel are inspired the Vietnamese women who are a part of my life – women who had to shoulder the burden of historical events while being the pillars for their families and community.”

“Their words reinforced a narrative I had heard my whole life: that I was ‘other,’ that I didn’t belong, that I wasn’t good enough, simply because I wasn’t like them. And that feeling, I realize now, was, and is, shame, a shame for the things that made me different, a shame for the culture from which I came from. And to me, the most disappointing thing was that I felt it at all.”

Ultimately, Disney seemed to side with Tran’s abusers and significantly downplayed her role in the following film. In the “Rise of Skywalker,” despite being a formerly major character, Tico is given just over a minute of screen time. While claiming to be inclusive, the Star War franchise and Disney reveal they would rather comply with the racist incels than promote Vietnamese voices.

These depictions are antithetical to Vietnamese women in Vietnamese cinema, who themselves are written as fierce exemplars of Vietnam’s resilience over the years. Vietnamese films like “Furie,” “The Scent of the Green Papaya,” and “The Little Girl of Hanoi” feature young women doing whatever they can to survive and keep their families together.

The thrilling tenacity of Vietnamese women is rarely seen in American cinema, as the industry is more concerned with objectifying or silencing them. While Hollywood plans to be more inclusive in the coming years, Vietnamese women need to finally be seen and heard after years of erasure.