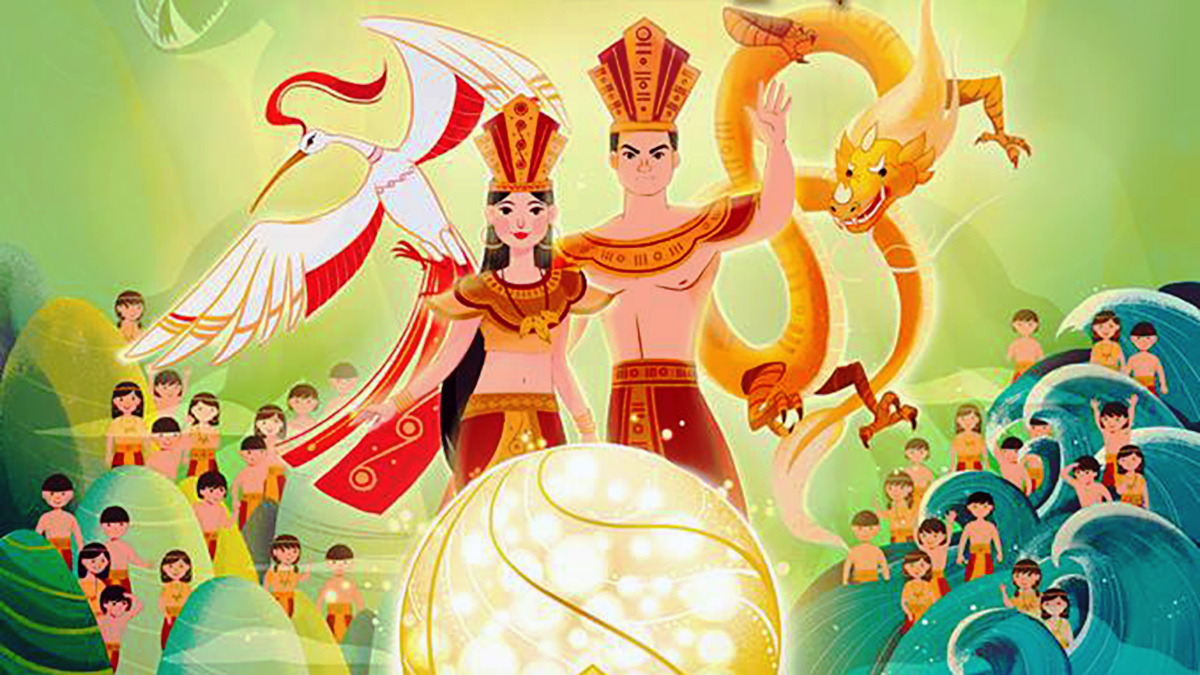 These two uneventfully, intersect near the slip road of the aforementioned bridge. On the surface, there is not much worth mentioning here, but dig a little deeper and you will find an epic mythical tale, breathtaking in its heroic adventure: a fantastical legend that serves as the origin-story of the Vietnamese people themselves!

It was Lord Lac who married the immortal mountain fairy – Au Co. It is this colorful folklore that explains the binding lineage between the people of the mountains and the folk who lived by the sea.

The ‘Lac’ peoples are some of the first to appear in Vietnamese history and were the dwellers of the Red River Delta, in what today is North Vietnam. According to legends the first leader of the Vietnamese people was a mountain god and the Ruler of the Land of Red Demons (the people who lived south of the Yangtze River, China). He was married to the daughter of the Dragon Lord of the Sea. Their son, Lac Long Quan, as legend has it – is Vietnam’s first true King — in fact, a Hùng King — which was the title given to rulers during the Hồng Bàng dynasty (2879–258 B.C.)

In the early years of his reign, there was great unrest amidst the people of the northern mountains with those of the southern lowlands. To remedy the situation Lac Long Quan travelled throughout his kingdom, becoming a legend in the process. His Odyssean journey is extolled as the archetypal Vietnamese tale of the mountains meeting the sea, revolving around the mythical form, fusions, conflicts and separation of the peoples from the north and the south – the mountains and the low coastlands. The mountain dwellers are immortals whilst the coastal folk, as descendants of dragon lords, are a distinct segregation that is to be found throughout Southeast Asian legend.

Lac Long Quan inherited supreme magical powers and the body of a dragon from his mother. He utilized these powers along with immense intelligence to heroically defeat three of the most horrid and vicious monsters of his time. Firstly, he was drawn to the coast after hearing tragic tales from widows and fisherman of a huge fish-monster that was killing the local fisher-folk.

This mighty sea beast, Ngu Tinh, had the body of a centipede that was said to rise above the waves like a ship’s sail. With some help from the gods, our hero built a large ship and an iron lure in the shape of a man with razor-sharp edges. Mimicking the voices of fishermen, Lac Long Quan successfully baits the sea beast and tricks him into swallowing the red hot iron hook.

Lac Long Quan heard these horrendous tales and decisively took action to confront Ho Tinh, and with the use of magic spells he trapped the beast and forced it into its original form, a fox.

However, the ferocious creature fought on. People on the shore watched the spectacle as a terrible storm blew in; eventually, Lac Long Quan had to dive into the water to battle the beast to its death. Finally, our hero cut Ngu Tinh into three pieces – its head becoming a mountain, the tail formed the beach around Bach Long Vi Island (Gulf of Tonkin) and the is said to have drifted far, far away, never to be found.

Next up to try to give our hero a headache was none other than the evil nine-tailed fox, Ho Tinh. Not far from Hanoi, to the west, this monster had for at least a thousand years lured victims back to his cave; like many a beast before him, Ho Tinh had a particular penchant for young women. Once in captivity his victims were first tortured before being eaten, as often seems standard monster procedure.

The wicked genie had played many diabolical games and taken various forms tormenting the people of the region, often taking them off for that popular pastime of the ages, torture!

Lac Long Quan heard these horrendous tales and decisively took action to confront Ho Tinh, and with the use of magic spells, he trapped the beast and forced it into its original form, a fox. Acknowledging his loss, the fox routs and flees only to be caught by Lac Long Quan, and they engaged in a mighty battle lasting three days with, naturally, the Dragon Lord emerging triumphant. It is said following Ha Tinh’s defeat, Lac Long Quan rescued many people from the cave and then flooded the area, creating that body of water now known to all as Tay Ho – Westlake, Hanoi.

If a sea-demon and a lusty fox were not quite enough, Lord Lac now had to deal with a possessed tree—as you do. An evil genie, Phong Chau, who lived northwest of Hanoi (in what is today Viet Tri) had morphed into the spirit of this ancient tree. The wicked genie had played many diabolical games and taken various forms tormenting the people of the region, often taking them off for that popular pastime of the ages, torture! Lac Long Quan took a long time to hunt down this demonic spirit, and when he finally did, a battle raged for a hundred days. Alas, the hero was unable to beat the nasty genie and reverted to using gigantic gongs and deafening instruments to scare his foe away.

It worked. The jubilant populous had soon built their champion a palace. However, ever the good son, Lac Long Quan instead chose to go home and stay at his mother’s place, under the sea—presumably taking a well-deserved rest. Nonetheless, he informed the people that he would return again if he were ever needed.

However, when a fairy and a dragon mate, the mother does not have a live birth; the whole thing being a rather more reptilian affair, and legend states that Au Co laid 100 eggs.

The Marriage of Lac Long Quan and Au Co

Sometime after Lac Long Quan’s retreat he was once again called upon, this time to remove an incumbent invader from the mountains in the north. In this incarnation he manifested himself in the guise of a handsome young man and on his return he fell in love with the invading chieftain’s beautiful daughter – Au Co – a fairy princess. Their marriage was to bring peace with the Chinese and between the mountain tribes of the north and the lowlanders of the south.

However, when a fairy and a dragon mate, the mother does not have a live birth; the whole thing being a rather more reptilian affair, and legend states that Au Co laid 100 eggs – which grew into 100 sons—a large family indeed.

These boys developed into adults abnormally quickly, and when they became men Lac Long Quan declared he could no longer live with Au Co, he complained their cultures were too different – that you could not mix fire and water. Alas, she returned to the mountains with 50 of her sons and he returned with the other 50 sons to his underwater palace. The breakup, seemingly amicable, is often referred to as Vietnam’s first divorce. It is these 100 sons that are believed to be the ancestors of the Vietnamese people.

So the next time you’re at the traffic lights at the end of Lac Long Quan street – perhaps sat on your motorbike in the rain or perhaps under the burning sun of summer, spare a moment to fantasize about the junction with Au Co and the fabulous mythology it all represents.

Vietnam’s Dong Ho paintings may be slowly fading away