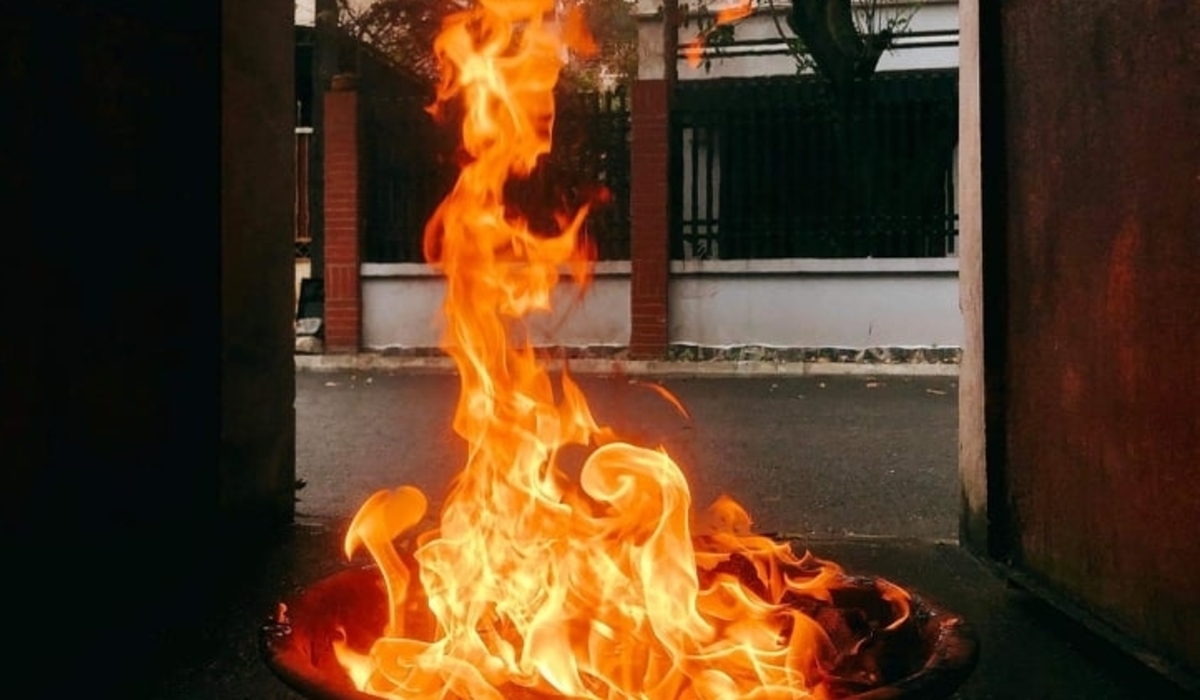 As Tet approaches, the Hanoi air is charged with upbeat music, the fragrance of flowers and the billowing plumes of smoke. In giant, stone cauldrons and near busy street corners throughout the city, young children stare in amazement as their parents and grandparents build small fires to honor their ancestors, in keeping with a beloved tradition. After worship is paid and the incense is lit, the burning begins.

While foreigners may find it strange, the act of burning paper objects has a deeply, spiritual connection in Vietnam. According to ancient beliefs, the afterlife resembles the world of the living and through burning certain objects, family members can send personal gifts to their ancestors. Most Vietnamese families opt to burn joss paper, often crafting it to appear as money. However, the easily malleable joss paper can also be shaped as other gifts besides cash, such as houses, motorbikes, iPhones and even, controversially, bikinis.

My Nhan, a teacher in Cau Giay, fondly remembers burning joss paper during her childhood in Nghe An Province. She would gather her siblings in the garden as her parents looked over the offerings of boiled chicken and sticky rice. “In my family, the children were in charge of the burning,” she grins. “It was the funniest part of the worship. I didn’t have a spiritual connection with it. We just liked to burn things!”

The ancient ritual was not always allowed in Vietnam. During the 1970s, the burning rituals were deemed too wasteful by the socialist government. However, this ban was removed in the 1980s, as Vietnam slowly reconstructed itself as a free market. In order to retain Vietnamese culture against encroaching western influences, burning joss paper was not just a spiritual practice but also a celebration of Vietnamese identity.

While the tradition and history is fascinating, burning joss paper is not helping Hanoi’s severe air pollution, with many Vietnamese giving the ritual up altogether.

“My mother told me to buy paper clothes and jewelry because she is worried our ancestors will be displeased, but I refused. It is a waste of money and it harms our environment,” Long Bien resident Tran Thi Hoa told VN Express.

Even religious officials have begun to condemn the ritual. In 2018, the Vietnamese Buddhist Sangha issued a document lambasting the burning of joss paper. Venerable To Lien reminded Vietnam’s buddhist community that the practice is not linked to the Buddha (rather it has its origins in China!): “Where amongst Buddhist scriptures and Confucian doctrines can Vietnamese intellectuals find the philosophy of burning joss paper?” he asked.

“In my family, the children were in charge of the burning,” she grins. “It was the funniest part of the worship. I didn’t have a spiritual connection with it. We just liked to burn things!”

Chào’s go to environmental scientist, Hanoi Weatherdude, attempts to creatively reckon with the difficult issue. “It’s tough to tell people to change or modify religious practices. Maybe the government can encourage people to burn things with less toxic emissions? Burn weed instead? Or just ban burnings altogether and have ‘fake joss paper’ that lights up with LED-lights so it looks like it is burning? Or maybe introduce VR centers and practitioners can meet their ancestors in a Matrix-like PlayStation 5 facility.”

Fortunately, some Vietnamese artists have possibly come up with a more practical solution. Last year, creatives Yen Nang and Le Duc Hung unveiled their own, mini-paper offerings made out of recyclable materials.

“The paper objects on the market are made in different sizes – a paper horse could be as tall as two meters. The more paper we burn, the more smoke we breathe in,” Hung told Vietnam News. “We researched and selected clean materials to make these mini votive offering sets. Thanks to the printing techniques, we can put a metallic shine on the joss paper without using materials that are not flammable or cause toxic smoke.”

While greener alternatives are sure to appear in the coming years, having the older generation make the switch is another task. As their children and grandchildren begin to move on from the practice, Vietnam’s older generation dogmatically follows it, unconcerned of the environmental impact.

“It is our tradition. It’s difficult to totally get rid of it,” says Nhan, when asked if Vietnam would support an alternative to joss burning. “The younger generation is more aware of the environment. In my opinion, younger people don’t like formality. We appreciate our ancestors. That is enough.”

[Opinion] I’m sorry your relationship didn’t work out but can you please keep it off social media?