Stand-up comedy in Hanoi is no laughing matter

Being blind in Hanoi 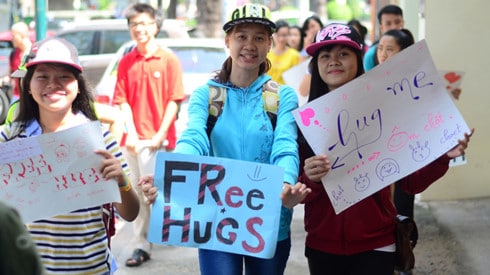 We live in times of great change and this has left many people scared, alienated and alone, but students all over Hanoi are attempting to change all that using what they think is a guaranteed miracle cure: free hugs.

Young Hanoians from high schools, colleges and universities are going to come together on July 28 to embrace International Free Hugs Day 2019, according to Viet Nam News on Friday.

Themed “View Yourself From Another Perspective,” the event at Hanoi Indochina Plaza aims to create a message of love, unity and respect through the simple act of give free hugs (who the hell ever charged for hugs anyway?)

Bach Thi Bach Lien, one of the key organizers, believes the day will help people come together and that modern technology is driving people apart. He told Viet Nam News: “We want to help young people to arouse the connection, and love for the surrounding community through a small but meaningful action – hugs”

“Plus, exchanging and expressing feelings like hugs is still seen indifferently in Vietnam, which creates an invisible gap between people.”

Alongside ample hugging there will be flashmobs, music performances and games.

Hugger-in-Chief Juan Mann is widely believed to have initiated the Free Hugs Campaign in 2004 when he hung out at Pitt Street Mall in Sydney holding a “Free Hugs” sign because he was feeling depressed. It took him 15 minutes to get his first free hug.