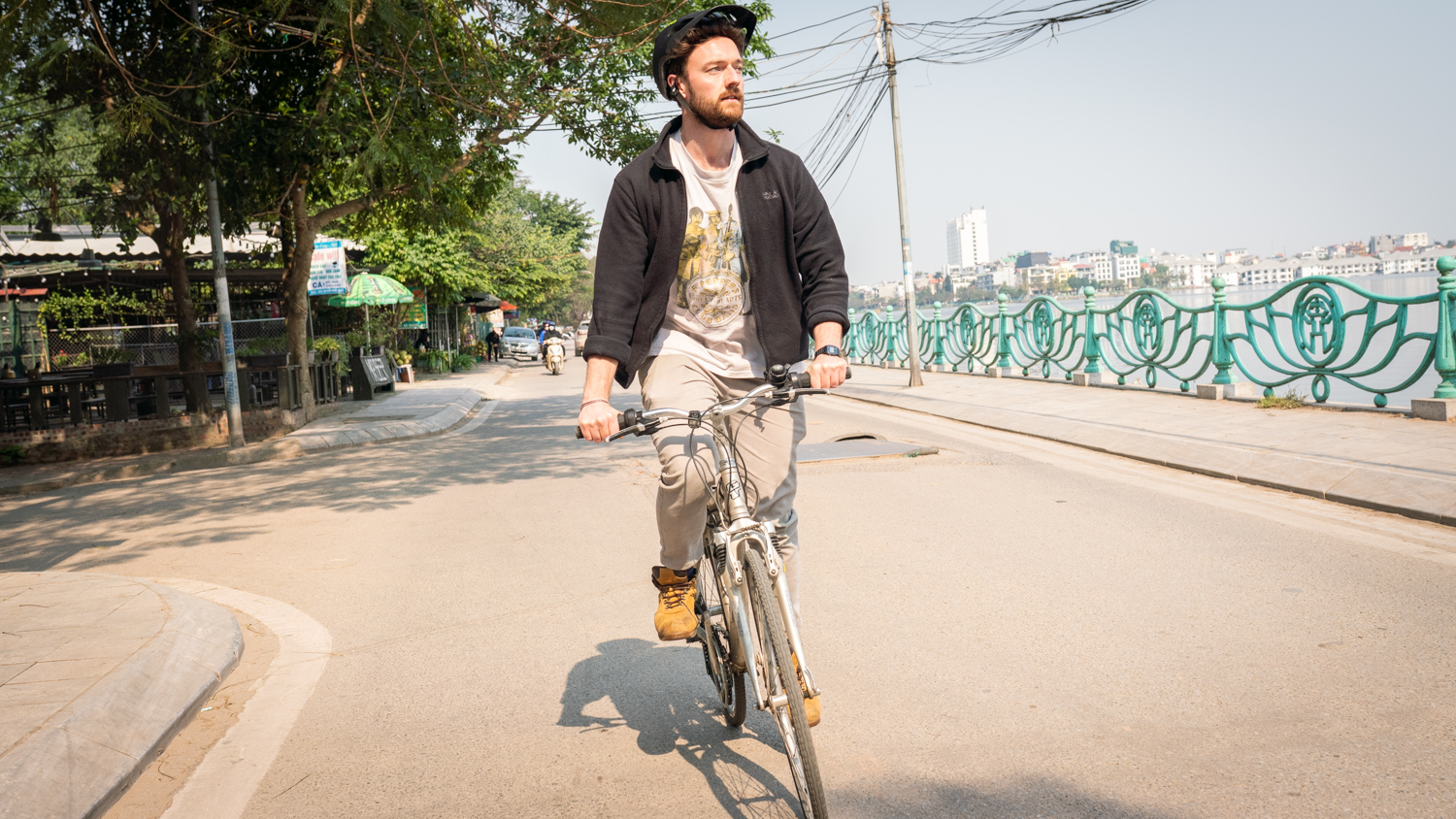 Everyone in Hanoi rides a scooter.

Most people take it a step further and ride a scooter with something daft on the back: trees, buckets of concrete, babies, dogs, and families of five. Occasionally, you can even see someone riding a scooter with another scooter strapped to their scooter.

Scooters are at the core of this mad city.

Arriving in Hanoi a few months ago, instead of buying a scooter, investing in a good bicycle seemed a good idea. Cycling is good exercise, it is good fun and it is good for Hanoi’s abysmal air quality (though cycling around in it probably is not good for the lungs).

A Vietnamese man realizing I cycle everywhere told me that I was “going to die.”

But more than all that, cycling here is fun. Because the roads in Hanoi are made for scooters, they are also more than suitable for bicycles –whizzing around on a bike provides an easy, appealing way to zip in and out through the traffic. On short jaunts, it is often quicker than a scooter anyway

But this choice of commuting style is not without its detractors. Friends like to roll their eyes and sigh when they are told they will be joined with a cyclist as they use the power of a motor. They get irritated thinking their scooter convoy will be held up a few extra measly minutes. “I just wanted to ram you off the road,” my friend Ed recently told me after a ride. Cheers Ed. It’s nice to have friends

But this is nothing compared to the reception received from more than Asian motorists. Vietnamese people like to laugh and joke and test out my bicycle while I’m stopping to buy food or water or whatever else. It is like I am from another planet.

“[Cycling] that’s such a white thing to do,” a Chinese man in Tokyo told me last month. A Vietnamese man realizing I cycle everywhere told me that I was “going to die.” A local woman said that “your head will get smashed.” These things are good for the confidence.

The people who like dishing out ominous portents of my impending doom are probably half-right. Being on a bicycle makes you invisible. Courtesy on Hanoi roads is pretty minimal anyway, but sitting astride a bicycle allows you to experience even smaller quantities of it.

“You have to stay in your envelope and feel the traffic. It is sort of like being guided in a dream – the goddess of compassion. “

People like to ignore cyclists. Occasionally, they also like to hurtle into me. But for the most part, cycling is probably just as safe as riding around on a scooter, though it requires a little more vigilance. One has to keep a keen eye on the scooter drivers, because they certainly do not keep an eye on us poor cyclists.

Dan Porter is a keen Hanoi cyclist. For him riding his bike takes on an almost spiritual dimension and he thinks it is nonsense when people suggest it is dangerous.. “It’s probably the safest thing you can do,” he says. “I learned a lot about Hanoi through cycling, and [improving] mental health.”

“The trick is not to look at people directly. You have to stay in your envelope and feel the traffic. It is sort of like being guided in a dream – the goddess of compassion. If I see too much traffic I just go more slowly.

Better mental well-being aside. There are so many reasons I love cycling around the city. Firstly, I love exercise. And there is nothing better than circumstantial exercise. If you can get fitter just by going from one place to another, you are almost exercising by accident.

“My legs being my engine and my arms guiding me through traffic makes me feel like Luke Skywalker flying through the Deathstar.”

But I am not an expert, just a commuter. There is a surprisingly large cycling community in Hanoi, which seems to get lost amidst the mess and madness of the scooters and smog. Plenty of keener, fitter and more adventurous cyclists here take much longer trips, to places such as Ba Vi – and sometimes even further afield.

And they all seem to love it. “My legs being my engine and my arms guiding me through traffic makes me feel like Luke Skywalker flying through the Deathstar,” fellow cyclist, Travis Johnson, told Chào. But Hanoi is not enough for Johnson, and he is soon embarking on a massive cycling trip from the Vietnamese capital all the way to Europe.

Hanoi Bicycle Collective are doing a great job promoting cycling in the city. One of the largest bicycle retail stores in Hanoi, they sell top-quality bicycles along with all the gear (and gears) you need. They also run events, including a group ride on the last Sunday of each month, which takes regular and new cyclists to quality cycling spots.

It is well worth purchasing a bicycle from the collective. They are very methodical when checking it over and offering advice, an excellent pit stop for all your cycling needs.

For anyone seeking more exercise, Chào heartily recommends cycling in Hanoi. It allows you to see the city in a unique and unusual way; it is a fun adventure.

If you want any tips on how you can get started, contact Hanoi Bicycle Collective. It is easy to get involved – there are loads of places throughout Hanoi where you can invest in new bikes, old bikes, bike repairs and plenty more. Once you open your eyes to cycling in Hanoi, you realize it is much more widespread than you might have realized.

There seems to be a prevailing idea that cycling is much more dangerous and much slower for inner-city Hanoi travel. But those preconceptions are not true. Cycling is fun, fast and no less safe than a scooter (if you a sensible!). Hanoi is a beautiful city filled with beautiful people. And cycling is a beautiful way to experience it.