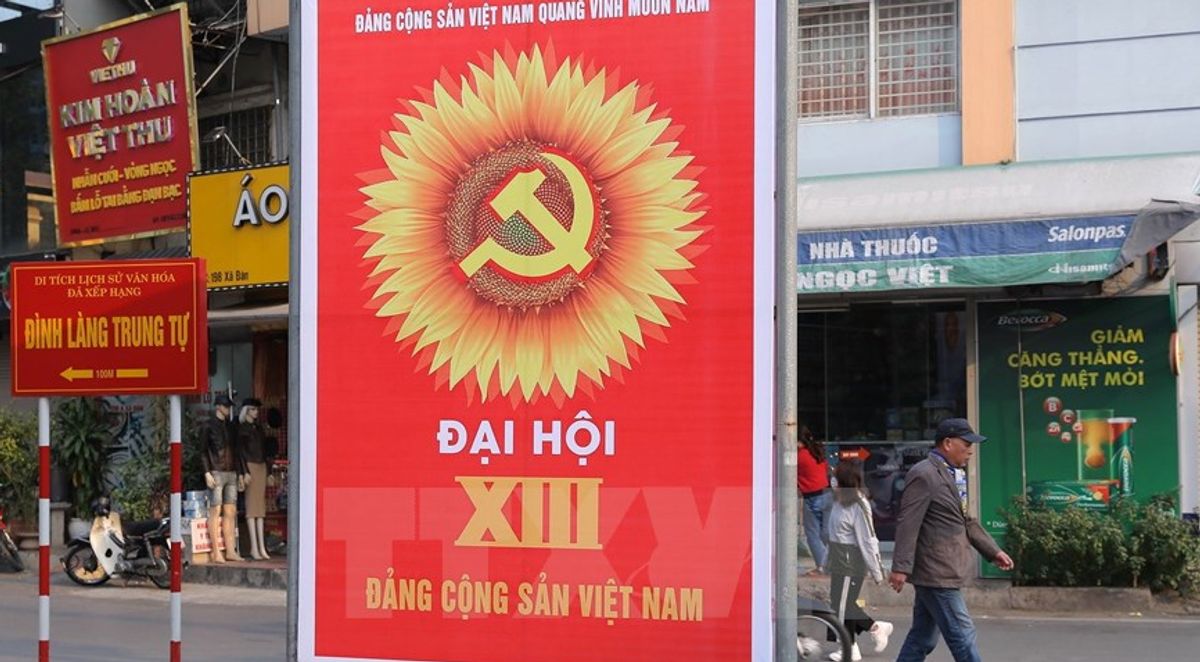 There’s excitement in the Hanoi air at the moment. Hammer & Sickle flags are fluttering everywhere and towering political propaganda art has seemingly appeared from nowhere–art that interests some, bemuses many and is likely pseudo-invisible to your average local. All this extra pomp is owing to the quinquennial (that’s every five years) gathering of the nation’s political juggernaut, the Communist Party of Vietnam for their National Congress.

The structure of governance here can appear a complex beast, but perhaps no more than other facets of life in this beautiful land. Boiling it down to basics, it essentially consists of three segments—the Legislative (National Assembly and People’s Councils) Executive (Government and People’s Committees/UBND) and the Judiciary (People’s Courts). These are administered across four layers: local (commune), district, provincial and national.

In theory separate, but in practice an integral part of all of these is the Communist Party of Vietnam. Founded on Feb. 3 1930, it is one of the largest political parties on the planet, with over 5.2 million members. Every five years they hold internal elections at commune, district, city/provincial and national level. The year 2020 saw Congresses take place at the initial 3 levels, with Committees elected by party members. The newly elected provincial committees sent nominees to the National Congress, which kicks off Monday at the National Convention Centre in Nam Tu Liem District.

The Congress and Assembly are two different things

It is important to note that the Congress is very different from the Assembly elections, which will take place across commune, district, provincial and national level later this year, with significantly less pomp and ceremony. All Vietnamese citizens over 18 are eligible to vote in these, not just Party members – each person votes for their choice of representative at each of the four levels. The vast majority of candidates elected are, of course, from the Communist Party (473 from 494 in 2016), which often leads to confusion, especially for your average expat.

The National Assembly is basically the highest governmental organization and the representative body of the people. It makes and amend laws, draws up and implements state plans and budgets, elects government ministers and the chief justice of the Supreme People’s Court and can amend the Constitution.

Returning to the National Congress of the Communist Party, more than 1,500 delegates first elect a 200-strong Central Committee who then vote in 14-19 individuals on the Politburo, a pivotal group (so evocative of Cold -war spy movies) who basically make day to day Party decisions in periods between Committee meetings and also ensure Congress decisions are implemented.

The Politburo also nominate Party candidates for Vietnam’s official four ‘pillars’ of leadership: the Party’s own top dog aka the General secretary, as well as the State President, Prime Minister, and National Assembly Chair, the latter three being appointed later by delegates at the National Assembly. Confusing, eh.

Like any high level electoral process, the interesting part for the majority of most people is the personalities in the running for the top job. Though these will not be officially revealed until the Congress begins, much rumor and conjecture have put forward several main contenders.

The most powerful position in the Politburo, and the Party, is General Secretary, currently held by the experienced and highly educated 76-year-old Dr Nguyen Phu Trong. He has held the position over two terms since 2011, a third term seems unlikely in line with Party charter, but not impossible. A Marxist theoretician, with not one but two PhDs to his name as well as an academic spell in the Soviet Union in the early 1980s, he boasts a wealth of experience at all levels of the Party. He has led a crackdown on high-level corruption, dubbed the “blazing furnace,”, which has seen a large number of top officials, including one member of the Politburo, receive jail terms. Despite receiving widespread praise, critics have added that, should he continue in office, the drive must reach further down the echelons of the Party ranks, rather than focusing on high level (mostly pro-business/private sector) offenders.

Another hot tip for head honcho is Nguyen Xuan Phuc, current Prime Minister. Born in 1954 in occupied southern Vietnam, his family secretly worked for the NLF (also known as the Viet Cong), and his mother and sister were killed by the Americans in 1965. With a long career in the Party behind him, his recent successes involve steering Vietnam to its victories over Covid-19 whilst maintaining the country’s rapid levels of economic development, all said to have gained him strong support amongst the all-important (current) Central Committee. One point of interest however, is that there has yet to be a General Secretary from the south of the country.

More remote possibilities include Ngoc Xuan Lịch (66), the minister of defense, Tran Quoc Vuong (67), and Nguyen Thi Kim Ngan (66), current chairwoman of the national assembly. If elected, Ngan, who is also from the south, would be the first female General Secretary. Vuong has essentially been Dr Trong’s sidekick, especially in terms of the anti-corruption crackdown, and unlike the business-friendly Ngan, is more committed to maintaining the party’s close adherence to Marxism Leninism, Ho Chi Minh Thought and the socialist-oriented market economy model which has borne so much fruit since the Doi Moi (Renewal) period that began in 1986.

The Congress will take place from Jan. 25 to Feb. 2, with widespread traffic restrictions beginning a day earlier across the city, so be aware that you may have to take detours. Those interested in learning more (which is no doubt virtually all of you) can check out the exhibition celebrating the 91st founding anniversary of Party, and upcoming 13th Congress, at the Vietnam Art and Cultural Exhibition Center, No. 2 Hoa Lu, Hai Ba Trung District.