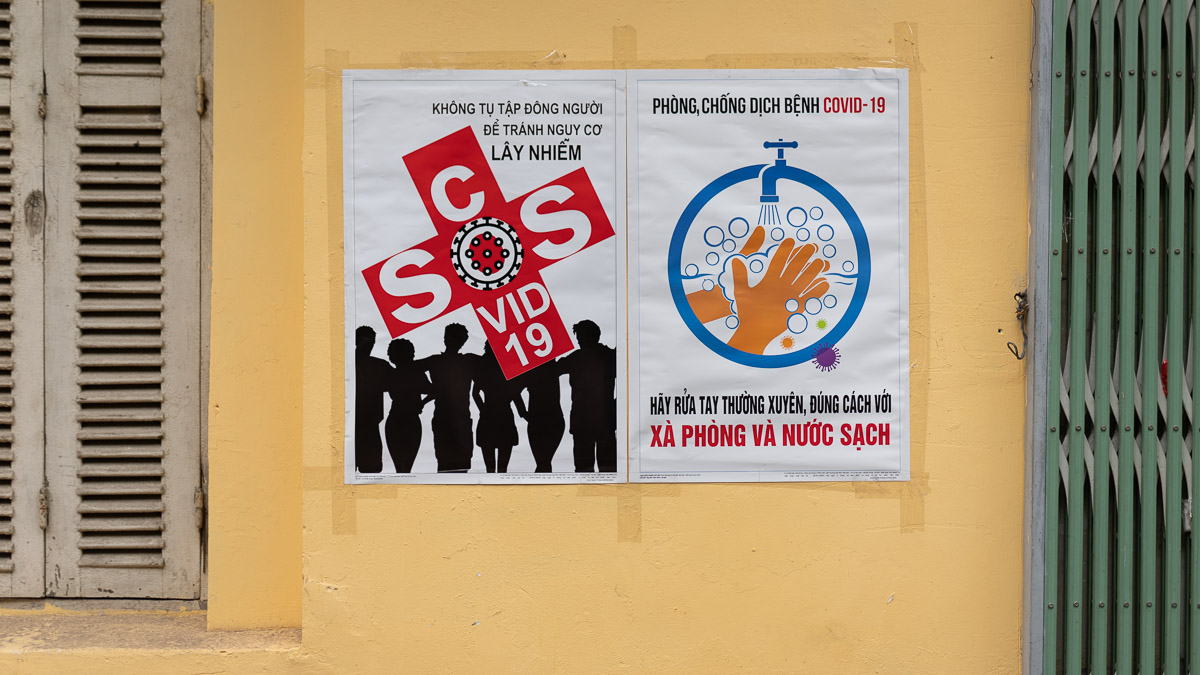 Unless things very quickly change (which is quite possible), it seems that Vietnam is one of the few global outliers that have almost — and almost is a key word here — contained the coronavirus.

It is remarkable that a relatively poor developing country bordering China, with a rudimentary healthcare system has achieved so much, but apart from the odd article in the Financial Times and Al Jazeera, as well as a couple of excellent opinion pieces from Chào correspondent Glen MacDonald, Vietnam has received relatively little praise worldwide, especially compared to South Korea, Germany and Taiwan.

Compliments and gratitude may be of little importance in the midst of a global pandemic but if other countries around the world are able to learn from Vietnam’s experience, they may be able to draw some lessons for the long-term future, for this surely will not be the world’s last pandemic.

How and why has Vietnam been so effective in dealing with the virus?

Back in late February 2003 when SARS broke out, it was an Italian, Dr. Carlo Urbani, treating a U.S. businessman for what seemed like a particularly serious strain of flu in Hanoi, Vietnam, who first recognized SARS as a new and deadly infection.

It was Urbani (who sadly died from SARS just one month later in Bangkok) who notified the WHO of this new disease and then played a key role in notifying the Vietnamese health ministry of the value of screening travelers, contact tracing and enforcing strict quarantine, which helped Vietnam “flatten the curve” in terms of SARS spreading.

Aside from being where SARS was effectively discovered (the outbreak started in China but as with Covid-19 it was slow to act, and later apologized for its delayed response, Vietnam also became the first country worldwide to stop the spread within its borders, all within two months.

At the time, the WHO said Vietnam had “conscientiously implemented detection and protection measures including: prompt identification of persons with SARS, their movements and contacts; effective isolation of SARS patients in hospitals; appropriate protection of medical staff treating these patients; comprehensive identification and isolation of suspected SARS cases; exit screening of international travelers; timely and accurate reporting and sharing of information with other authorities and/or governments.”

One reason that much of Asia’s response to Covid-19 seems more pro-active and prepared than, say, Italy, Spain, or the United States, is due to their extensive experience dealing with SARS.

It makes sense, therefore, that the first country to effectively deal with SARS would be one of the most effective in containing the next pandemic, especially as Covid-19 is, essentially, a new strain of SARS (SARS-CoV-2 to be precise).

Only since April 1 has Vietnam been in a state of advanced shutdown, with the Prime Minister Nguyen Xuan Phuc ordering a strict nationwide social-distancing campaign with all but essential services closed. Schools have been shut since before the Lunar New Year holiday (i.e. Jan 23, which was when Wuhan was shut down). Domestic flights have been highly restricted. No foreign citizens have been allowed into the country since March 22. Officially, the country has not yet gone into full lockdown — with legally mandated restrictions of movement — but it is possible it will happen any time in the coming weeks.

With much of world now like this, you might wonder what the point of mentioning all this is.

Indeed, this is a picture of the Cheltenham Races in the United Kingdom about three weeks ago, when people were actually dying of Covid-19. We can call this one “Insanity.”

Can we trust the numbers?

Over the last two months, Chào has been monitoring Vietnam’s response to the virus closely, and we have received quite a few emails and questions from readers questioning Vietnam’s response in various ways. What are hospitals there like? Aren’t they covering up the numbers? Isn’t it a socialist country? Well, not great, unlikely, and yes, respectively. Essentially, Vietnam is playing to its strengths: public unity, a large easily mobilized labor force and strong messaging. The country knows that a mass outbreak nationally would be utterly devastating so it is not fucking around with the quarantine and tracing possible cases.

And as for socialism? It appears the global response in most sensible countries has been to embrace a measured collectivist response, so maybe Vietnam already has a head-start on this one.

A combination of medics, police and even the military when called upon are aggressively chasing down any possible cases as quickly as possible and testing, more often quarantining, those it thinks may have the disease. While this can appear heavy-handed at times, it is necessary. As soon as people arrive on flights from affected areas all passengers are put into quarantine, up to 50,000 people so far. Desperate times do sometimes call for desperate measures. As a recent meme comically put it:

“Radical anarchists are urging people to obey the state.”

Are there really just 227 cases and no deaths? Nobody can ever be sure to what extent any government is massaging the numbers — many use different criteria to assess infection rates, so comparisons are largely speculative.

If Vietnam were fudging the numbers, there would likely be widespread anecdotal evidence. Vietnam’s dissident diaspora would be raising red flags on social media like wildfire. Thus far, there has been no such moves. Chào has not seen a single reputable source produce any evidence to the contrary.

And as for socialism? It appears the global response in most sensible countries has been to embrace a measured collectivist response, so maybe Vietnam already has a head-start on this one.

Last week, I received a text message from the Vietnamese authorities.

“Hi. I’m from Medical Center. Can I ask you something, when was the last time you came from abroad to Vietnam?” After telling them I had been in the country for over two months, they replied: “And after that you don’t go to other countries?”

The previous week, I had to send a form along with passport stamps to prove where I had been. Anyone that has been in the country since March 2 had been asked to quarantine at home for at least two weeks, with checks to ensure they do so. Those skipping quarantine have been quickly rounded up, fined or arrested.

“I think other countries should look to the Vietnamese approach. Ok it is a bit inconvenient, but it is exactly what is needed. I applaud them.”

Many infected have seen government workers turn up at their homes, in full haz-mat suits, to disinfect the property. Anybody that has been on a flight with a diagnosed Covid-19 case has been mercilessly tracked down and quarantined. It may seem draconian to some, but it is less draconian than letting hundreds, perhaps thousands, die by not being vigilant.

Gavin Wheeldon, a 27-year-old marketing executive from the UK, was one of the many thousands of people quarantined in Vietnam. He arrived in Vietnam to start a new life on March 14 and was immediately put in a two-week quarantine on arrival.

“The [quarantine] area had been open here for two months already, so people knew what they were doing. It was mainly military staff but there were doctors and medics,” Wheeldon told Chào. “The military staff were wearing full on blue haz-mat suits and stuff. A bit scary at first because it is like the sort of thing you see in a movie, and you think, is this actually happening? Initially you do not know why you going or where they are going to take you, but you calm down pretty soon and realize it is all for your own safety.”

Despite being unnerved by the quarantine initially, after living the experience he believes other countries should be doing more to stop the virus in its tracks, and that despite the camps being on the spartan sidƒsparte, he thinks they were necessary.

“The conditions were fine. Ok, the beds were military beds, as you are basically in a military barracks. [It is a] metal frame, quite hard, but you get used to it after a couple of days and it is actually pretty good for your back,” he said. “I think other countries should look to the Vietnamese approach. Ok, it is a bit inconvenient, but it is exactly what is needed. I applaud them.”

By way of comparison, there are currently still flights from New York to London every single day — with no social distancing, no testing on arrival, and no enforced quarantine. Anybody that lands will likely get a taxi or Tube to their next destination, thus almost certainly spreading the disease (both these cities are currently seeing huge spikes in Covid-19 deaths).

Brazilian President Jair Bolsonaro effectively said last week that Brazilians could bathe in excrement and not get sick. Rumor has it that Bolsonaro tested positive, his aides sure did.

Only three weeks ago, the UK’s Prime Minister Boris Johnson was boasting that he had personally visited several coronavirus patients and “shaken all their hands.” He has since, unsurprisingly, contracted the virus.

Just two weeks ago, his chief medical officer announced that the official policy was for the country to develop “herd immunity” by letting 60-80% of the country contract the virus. The UK has since performed a U-turn, no doubt to widespread relief.

Donald Trump’s response was initially to deny the virus would be a problem, and blamed the media and rival politicians for hyping the danger. Trump is now saying America will be lucky if they keep the number of deaths under 100,000.

Brazilian President Jair Bolsonaro effectively said last week that Brazilians could bathe in excrement and not get sick. Rumor has it that Bolsonaro tested positive. His aides sure did.

It goes without saying that all of these responses are not helpful. Admittedly, these are three of the most ill-equipped world leaders to ever have had to take charge in a global emergency. Their communications have proved a PR disaster, and likely a humanitarian one too.

By contrast the Vietnamese response has been rational, swift and unified, including but not limited to such measures as:

The lessons that other countries can learn from Vietnam are simple and straightforward, It seems odd that they need to be stated. But it seems they do:

If a small developing country, just a few hundred miles from Wuhan where the virus began can work things out, the rest of the world shouldn’t really have too many problems.