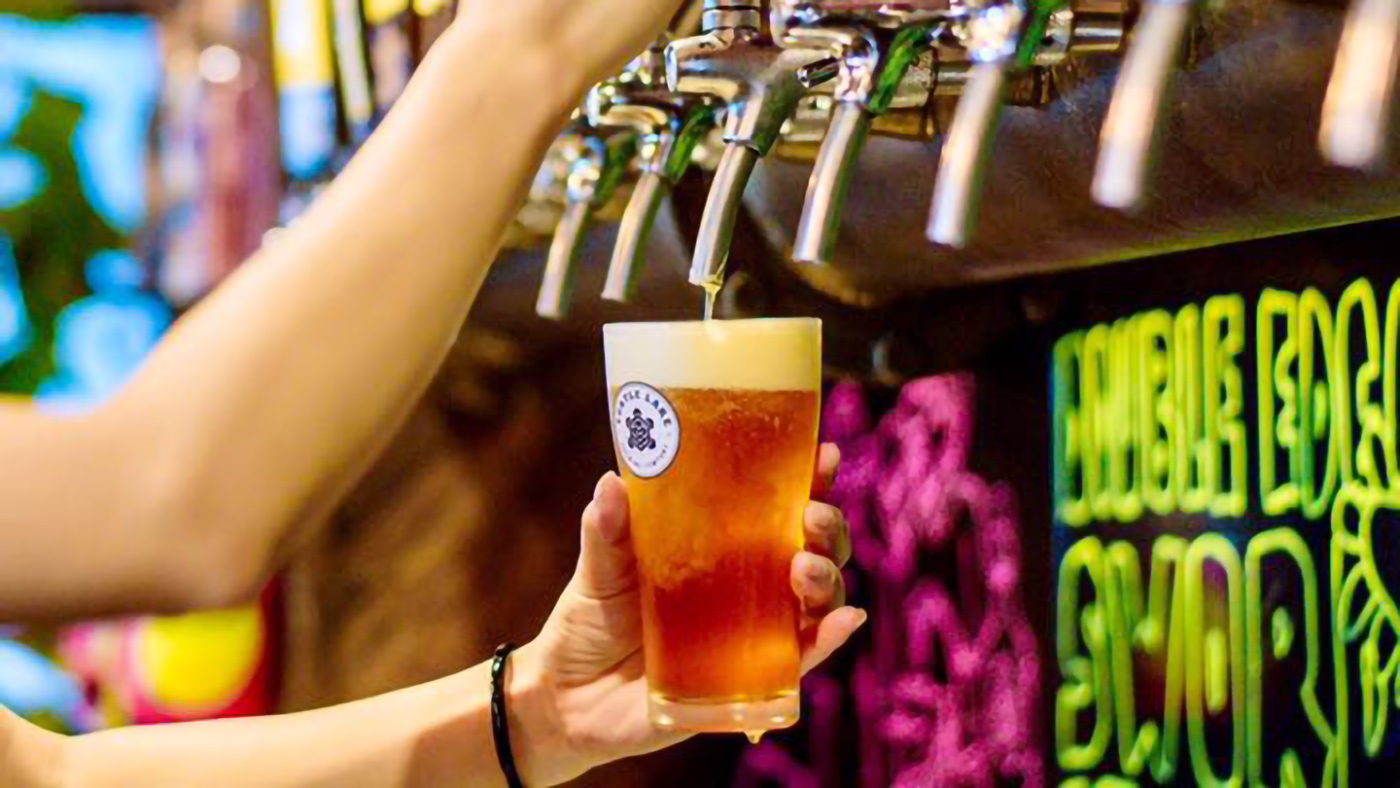 “Reality is an illusion that occurs due to lack of alcohol.” Anon.

Vietnam just loves its alcohol: whether it’s the epic icy-cold goodness of a street-side bia hoi, the violent kick of the local rice wines or, more latterly, its mouthwatering range of premium craft ciders and hoppy beers. It’s with these last two in mind that Hanoi is launching its very own booze festival this weekend: “For the Love of Craft.” With local lockdown restrictions still afoot throughout the globe, it promises to be one of the world’s very first post-Covid booze festivals. But rest assured, there will not be a bottle of Corona in site. This is going to be two days of the good stuff and the good stuff alone.

Turtle Lake Brewing will be hosting the event, which will see two days of drinking and eating with a vast array of craft brewers from all over Hanoi, and even a few luminaries from Saigon coming up enjoy the fun. The thirst-inducing lineup is too long to list here but, screw it, we are going to do it anyway.

There will be brews on offer from: Kong Craft Beer, Hanoi Cider Company, Overmorrow, Furbrew, Brothers Grimm Bia Hanoi, Bazan Brewing, Bross Beer, Fuzzy Logic, Turtle Lake, C-Brew Master, Golden Perch, A Dao Brewery, and Pasteur Street. Frankly, if there are aren’t a few ales in that lot to wet your whistle, perhaps you should be spending Saturday night at home with a nice cup of coco. We won’t judge (well, not too much anyway).

All of the vendors will be vying for a shot at the Chào Hanoi “People’s Award” as well as the Chào “Editor’s Choice” trophy. Turtle Lake Founder and Event Organizer Lamont Wynn said: “The events all slowed down a bit with Covid but things are picking up now, and we wanted to be part of that. And, honestly, with so many great breweries in Vietnam these days, we wanted to bring as many of them together as we could to give people a chance to come try new beers and ciders or breweries they have not tried before. That’s why we made it free entry.”

Each and every brewer at the event has a different style, vibe and angle; some are looking to promote a specific brew, others just to get their name out, but all share a unique passion, a love of, sometimes obsession with, craft brews.

“Honestly, with so many great breweries in Vietnam these days, we wanted to bring as many of them together as we could to give people a chance to come try new beers and ciders, or breweries they have not tried before.”

“At the festival we will bring our bestseller, Chinook IPA, our best sour beer, Fresh Mulberries, both in kegs, and our oatmeal stout, Dark Diamond, and our latest innovation, Coffee Beer, in bottles,” said the magnificently bearded Thomas Bilgram of Furbrew. “We have a goal of being the most innovative and special brewery. We want to be remembered for our brand, more than on our individual beers.”

One of the joys of the Hanoi craft beer scene is its inclusivity, with foreigners and locals both getting involved. There are brewers in their twenties and some in their fifties. In an industry that was once the preserve of men, women are getting increasingly involved in the process too. Everyone in the scene makes a strong effort to help each other out.

Cong Nyguyen, laidback founder of Kong Craft Beer, is one of several Vietnamese brewers at the event, and is pumped about what is on offer at “For the Love of Craft.”

“I think it’s going to be great! The weather is looking good, and it’s the first one in a while. We have games and things planned to keep it fun for all. Hanoi deserves a bia fest,” he said. “Our philosophy – good local beers for all, anytime, anywhere (locally), and don’t break the bank!”

While there’s no doubt the festival is going be inspired by the art of craft booze, there is also going to be plenty of entertainment with live bands such as The Miles Scott Soul Project, and Dan and the Vices, and for those that like their beats just that little more banging, there will be plenty of turntablists to, literally, man the decks, including DJs Vaughan, Pete T, Steve Obi, Just Hilda, and Teodora Von Context, all playing a mashup of funky genres.

All of the vendors will be vying for a shot at the Chào Hanoi “People’s Award” as well as the Chào “Editor’s Choice” trophy.

“It’s a fantastic chance to enjoy some of Hanoi’s finest DJs and live acts one place while getting ragged on craft beer,” said Saturday night headliner and man-about-town DJ Vaughan. “It’s the lineup of the millennium!”

As their name alludes, Bross Beer were set up by two Vietnamese brothers in 2018 and they have been making hoppy waves ever since. They will be bringing several of their signature bevvies to the event, including a Butterfly Pea Cider made from fresh natural pea butterfly flower, billed as a fine brew with a refreshing and delicate taste.

“Our dream is to bring the best Vietnamese ingredients combined with western craft beer culture, to make a genuine craft beer for the Vietnamese. We hope we manage this at the event,” said CEO and founder of Bross Beer Son Le.

Overmorrow Brewing Co. are another strong brand that have been making a splash in Vietnam’s nascent, soon-to-be-huge, craft scene. Head brewer and Partner Chris Jarvis said: “When Lamont from Turtle Lake Brewing proposed the idea for a [mainly] Northern-brewery-specific festival, I think everyone was immediately interested. After a couple months of having to shut down our brewery due to the pandemic, we’re still in awe with how the community, both brewers and craft beer enthusiasts, rallied.”

“This weekend we will be unveiling ‘Long Phụng Funk’ our modern Belgian farmhouse ale with a Northern Vietnamese twist, which comes in the form of mắc mật, a mountain-dwelling distant cousin of the citrus fruit family.”

“It’s a fantastic chance to enjoy some of Hanoi’s finest DJs and live acts in one place while getting ragged on craft beer,” said Saturday night headliner and man-about-town DJ Vaughan. “It’s the lineup of the millennium!”

Another beer to look at for this weekend will be the Blackberry Porter, as newly released by Golden Perch, a nano-brewery established just three years ago in Hanoi. Of his new brew, Founder Long Nguyen says: “The malted barleys and hops generate a full traditional porter. The addition of all natural pure blackberry offers an exciting complexity to this easy sipping wonder. We expected it go down a storm at the festival.”

Obviously two-days of heavy pint-drinking will take its toll, so there will be plenty of food on offer, aside from Turtle Lake’s usual excellent offerings (don’t panic people, their wings will be available). Wynn is also putting on a BBQ replete with burgers, hotdogs and falafel, to enhance those outdoor summer vibes.

While “For the Love of Craft” is a beer-heavy event, there will be a fair few ciders representing, including a large range from local stalwarts, the Hanoi Cider Company. Proprietor Guy Dickson who helped organize the event offered his thoughts. ““Honestly, I love my beers as much as any one—especially all the Vietnamese craft coming through—but the reality is for some people craft beer is sometimes a little overwhelming. Bringing in a few ciders, changes that. Women love it as much as men, and you have got so many different fruits to play with. It’s the perfect summer drink. And we are sure more than a few gallons will be drunk at the fest!”

With good food, fine weather predicted, awards to be won, awesome beats, and some of the best Vietnam ciders and beers ever brought together in Hanoi, “For the Love of Craft” is set to be an epic two-day bender that will linger long in the capital’s collective, though perhaps somewhat hazy, memory.