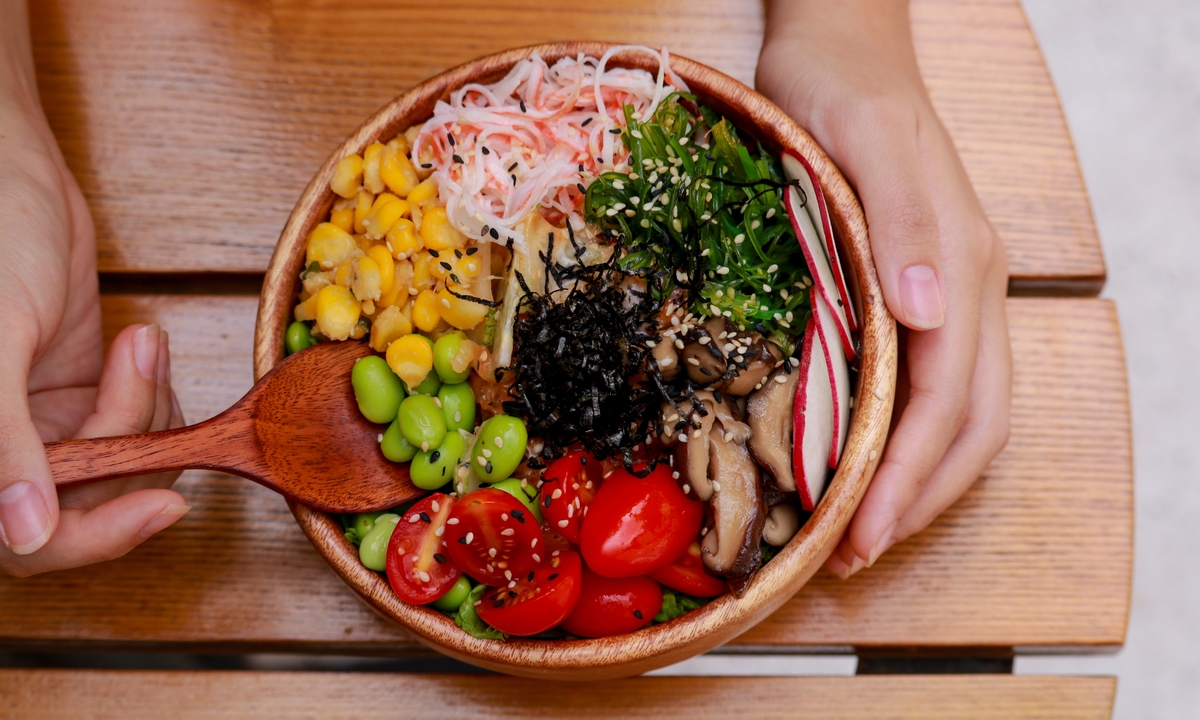 When it comes to tapping into the zeitgeist for healthy food served in simple, pared down and aesthetically-pleasing locations, Poke Hanoi is on point. Opening in early 2018, this trendy, modern restaurant manages to capture what’s come to be a signature of classic Old Quarter F&B locales: a squeezed-in, tiny entrance with little fanfare that opens up to a surprisingly spacious area.

Originating in tropical Hawaii, Poke (poh-KAY) in its authentic form is composed of 90% fresh, diced raw fish and the rest being light vegetable garnish. As with many food fads, the restaurant has somewhat tweaked the dish with vibrant ingredients added to suit the local palate, yet it still retains its renowned freshness. The choices are visually overwhelming at first, but the huge instructional menu is a pretty intuitive guide in navigating 5-step process:

1) Pick your base (salad, rice or some combination of both)
2) Pick your poke (two proteins of your liking)
3) Pick your sauce
4) Pick your topping (as many options as your heart desires)
5) Pick your garnish (sesame, shallots, nori, etc.)

Staff are eager to help you pick ingredients to suit personal liking. Indecisive types like myself can just go for ham and a bit of everything—it is unlikely to disappoint. Each poke bowl comes at a fixed price of 180.000 VND (130, 000 VND for a vegetarian option).

“Two guys from Israel posted about us in a group in their country, and apparently, Poke Hanoi’s popularity is through the roof over there.”

Some may dismiss this as yet another overly hyped salad dish that edges on being bland and boring. But, it is its honest, no-hijinks nature that has caused its popularity, and boy is the food colorful. These dishes do not just satisfy physical hunger (poke bowls here are more filling than you expect); Poke is a dish to be feasted on with the eyes as well as mouth. And, yes, in our social media era, Poke is as Instagrammable (groan) as they come. Perhaps the best part is that your friends can’t complain about the food going cold as you strive to capture that perfect “check-in” photo.

As lovely as Hanoi is, there is no denying the city can easily suffocate you if it wants to, with the constant smoke, relentless honking and what-have-you. So, stepping foot into Poke Hanoi feels like a huge stress reliever–the eatery adorned in natural greens and wood, even opting for glass doors and ceiling to allow more natural sunlight. The outdoor seating area has a scenic view of the Hoan Kiem Lake. It is a testament to the owner’s ability to transform a humble-sized area into a beautiful, clean-lined airy space. While certainly not the cheapest Poke in town, the time spent here is evocative of a mini-retreat, and well-worth the price point.

“Clean, fresh and friendly is what Poke Hanoi prides itself on. We take customer experience very seriously,” says Nhan, the 24-year-old manager. Indeed, in all of Chào’s visits, the age-old mantra ‘Customer is King’ has been palpable, which can often be a hit-or-miss in even some of the more high-end destinations in town. Nhan recalls a story of last winter, when Hanoi was simply too cold for its own good by local standards, and even the two-way aircon system wasn’t going to cut it. “There were so many suggestions from customers. Some jokes telling us to put hotpot on the menu, but we actually listened to one and started providing miso soup for everyone who comes in, on the house.” What was initially just a winter-long add-in was so well-received that it became a permanent staple, “It’ll be here for as long as the people want it.”

Poke Hanoi is a prime example of letting food and service speak for itself, and Nhan admits the restaurant doesn’t really do much marketing, relying largely on word-of-mouth instead. And it works. “Two guys from Israel posted about us in a group in their country, and apparently, Poke Hanoi’s popularity is through the roof over there. From August to December last year, we had a surge of Israel customers coming here to eat. They even told us, ‘you guys are famous in my country.’”

Those who have eaten at Poke before will undoubtedly return, and in the near future, Poke Hanoi plans to open up a second location in Dang Thai Mai street in Tay Ho, ideal for those expats who never leave what often feels like a foreign enclave.

For now, if you fancy yourself a romantic lunch date or something a touch more upscale than a simple bowl of pho with friends, Poke Hanoi is not to be missed. Recommended.

Cốm and get it: notes on Hanoi’s sticky green rice