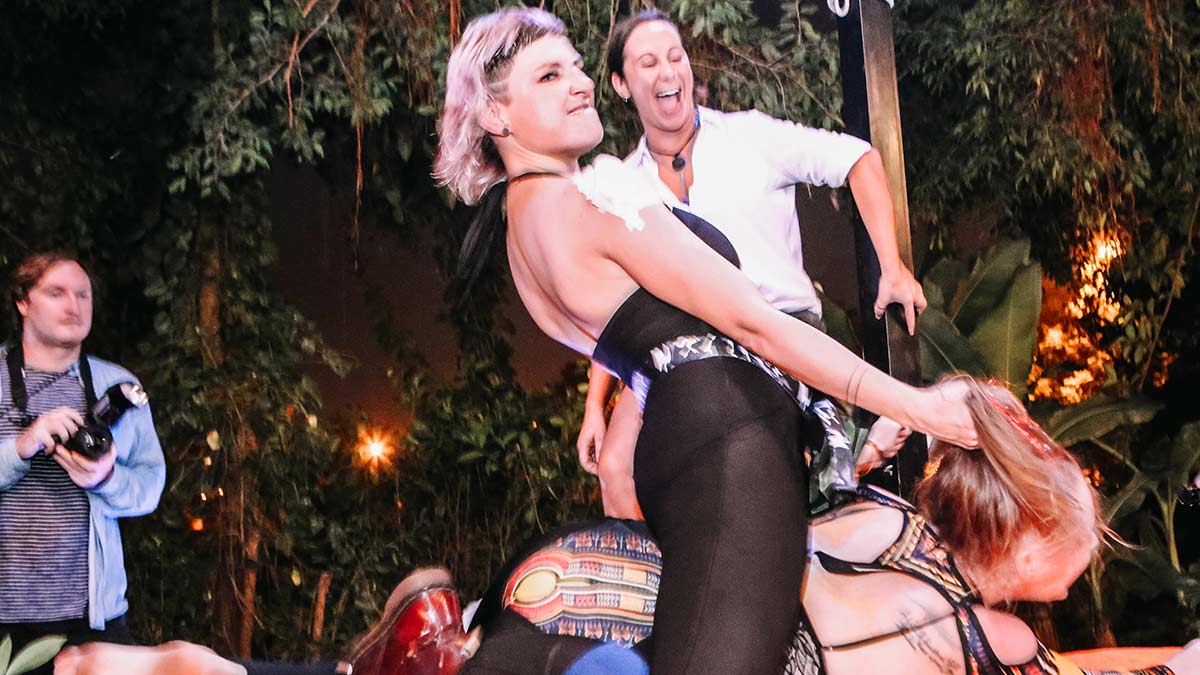 Few things get the blood pumping and heart racing quite like beautiful women getting oiled up and ready to wrestle. And so it proved at a unique event hosted by Turtle Lake Brewing Company in Tay Ho on Saturday evening. “Finish Her: Ladies Wrestling,” was a fun-filled night of crazy banter, stylish moves and absurdly entertaining characters.

It was the first event to be put on by up-and-coming event organization Cherry Bomb, which aims to promote safe spaces for women, particularly queer women and people who identify as non-binary. And yes, the irony was not lost that the wrestling ring was used as their opening event to create safe spaces. It was a success too, raising a whopping 27,500,000 VND for HopeBox, a social enterprise dedicated to providing healthy lunches for office workers and creating sustainable jobs for women escaping domestic violence in Hanoi.

The power of women could be felt in the air as the beautiful, muscular females full of adrenaline hit the stage, run amok, and wowed the crowds, all while helping raise money for a social project dedicated to female empowerment.

Turtle Lake Brewing Company was packed to the rafters, and a small orange stage was positioned against a backdrop of lily pads floating above the water beyond the bar. There was electricity in the air as the wrestlers delivered an energetic performance, each woman embodying their character fully and to much fanfare. From the peace hands and chilled out vibe of Free Loving Fanny and ukulele playing Mama Caro the Camp Counselor, right through to the powerful all-American strut of Mistress America – the ladies had the cheering crowds enthralled, with the performances causing much laughter, shouting and whooping. It really did feel like ladies WWE had arrived in Hanoi, fully formed and ready to go.

The only issue that distracted from the event was one of sound quality. The speaker sound of the announcer was not loud enough and the banter between wrestlers often could not be heard, being somewhat lost among the lively crowd. This, however, did not dampen the spirit of the event and every person in Turtle Lake Brewery was on the edge of their seats waiting to see just what crazy thing would happen next. It was a wild night, and it is safe to say everyone is waiting to see exactly what kind of explosion Cherry Bomb intend to detonate on their next Hanoi outing.